Stop-motion specialists Mark Caballero and Seamus Walsh delve into the making of ‘SpongeBob SquarePants: The Legend of Boo-Kini Bottom,’ airing on Nickelodeon on Friday, Oct. 13. 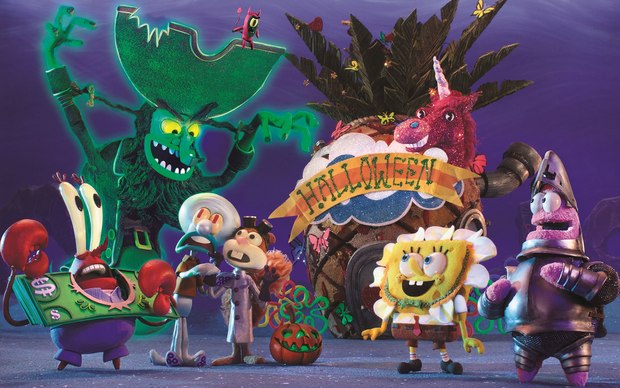 ‘SpongeBob SquarePants: The Legend of Boo-Kini Bottom’ © 2017. All images courtesy of Screen Novelties/Nickelodeon.

SpongeBob SquarePants: The Legend of Boo-Kini Bottom, directed by Screen Novelties co-founders Mark Caballero and Seamus Walsh, is the second SpongeBob special for the company, after 2012’s SpongeBob SquarePants: It’s a SpongeBob Christmas! The company, which has previously worked on such stop-motion projects as Robot Chicken and Moral Orel for the Cartoon Network’s Adult Swim programming block, also created a stop-motion version of the iconic show open for its 10th anniversary, in 2010, backed by vocals by CeeLo Green:

Production of The Legend of Boo-Kini Bottom used 27 sets that called for 15 boxes of breakfast cereal to create Bikini Bottom’s coral reefs, eight pounds of glitter to decorate SpongeBob’s pineapple house, and hundreds of popsicle sticks to make up the planks of a scary roller coaster track. Black lights were used to create a fluorescent glow across the puppets and sets.

Caballero explained that they were very excited when they were approached by supervising producers Marc Ceccarelli and Vincent Waller, “because we’ve been doing a lot of Christmas stuff and as much as we love Christmas, it’s nice to switch out the holidays. We were already coming up with gag ideas before even seeing the boards.”

Walsh added that thanks to the classic works of Rankin/Bass on holiday specials like Rudolph the Red-Nosed Reindeer, Frosty the Snowman and The Year Without a Santa Claus, Christmas has become irrevocably linked to stop-motion animation. So it was a breath of fresh air to tackle a Halloween special. “They let you go crazier with the gags and the outrageousness when it’s a Halloween special,” he says. “We also love to interpret 2D, things that are already known in 2D and trying to bring them into the stop-motion realm in a pleasing kind of a way.” Of course, one of the first challenges was starting from scratch with fabrication of the characters and environments. “Having done the Christmas special before, we had done a lot of R&D back then that we were able to use this time,” said Walsh. “Just the fact that you have to basically recreate Bikini Bottom in a three-dimensional way, inside a stage. It’s definitely a daunting thing when you’re just sitting there with the storyboards and you’re thinking, ‘Okay, we’ve got to make this work.’”

Walsh explained that the team at Screen Novelties tried to capture as much as possible in camera, without CG set extensions. “There’s even stuff that should be done digitally that we’re doing practically anyway,” he says.

Walsh said that that “inherent anarchy of the stop-motion process” gives them a creative freedom that makes it distinct from 2D or CG animation.

“There’s always these weird, unpredictable things that happen that you just have to go with,” he explains. “The stop motion is very controlled but because you’re using physical objects and because we have to do it at a pretty fast pace for TV, you’re making stuff and throwing it out there on the stage and going with it and it’s very much by the seat of our pants, but I think that gives it a lot of energy in a way that it feels very unlabored and kind of spontaneous in a way that sometimes animation isn’t.”

“I don’t know if the viewer will identify it while they’re watching, but there’s a sense that something was actually physically created and animated for that scene and those things exist somewhere in the world,” adds Caballero. “As Ray Harryhausen always said, it gives you an otherworldly sense that this is real, but it’s not entirely, literally realistic…. It’s hard to explain but it’s a feeling people get when they watch it.” When it comes to the main challenges they faced, the directors differentiate between the fun challenges and the boring ones.

“The fun challenges are always staying true to the sensibilities of the show – the weird faces and weird cutaways [of SpongeBob SquarePants],” says Walsh. “We want to do the same thing but make it our own as well. So, we have to figure out what new replacement puppet are we going to do for this take, or how are we going to approach the Dutchman character and make him unique.”

“Another really fun, exciting challenge is to take our crew out of their comfort zone, and push them to the limits in terms of fabrication of set, of puppets, animation, and pushing them to get that pose or that style of animation, and they’re like, ‘but wait a minute... don’t do that to me. Stop it,’” adds Caballero.

One of the key technical (boring) challenges, was working with black lights on set. Of course, characters look quite different under black light than normal lighting. “You can paint the puppet partially in regular incandescent light and then you have to basically do it again in the black light, which is really a pain,” Walsh comments. “Plus, not all black lights work the same.”

Caballero explained that they only had about 10-14 feet of stage space to work with on any given set, which forced them to be inventive in terms of recreating Bikini Bottom in a way that’s still recognizable for fans of the show. “The cool part about it is because it’s Halloween and it’s a different medium, you can push that a little bit more and play with colors a little bit and stage things in more of a theatrical sense.”

“So many of the tricks and techniques that we use in stop-motion are already kind of modified theatrical tricks and or stage tricks,” Walsh confides. “For example, for all the ‘flower clouds’ that you see in Bikini Bottom, we’re using the little spotlights with gobos on the front with the flower patterns on them. We’re projecting them through layers of like bridal veil material on to the back wall so they get this wispy, ethereal quality. That’s something you can only do in this medium.”

Caballero explained that they also used rod puppets and marionettes. There will also be a 2D sequence near the end, designed by Sally Cruikshank.

“We get bored easy and we like to do things that challenge us a little bit so we can have some fun doing it because if you can’t have fun doing stop motion, then don’t do it,” says Walsh. “It’s really labor intensive and so you really have to commit to it. You have to have a sincere feeling about it otherwise stop motion will destroy you. If we didn’t love it so much, we wouldn’t do it.”