The Scene Stealing Star of ‘The Boxtrolls’ 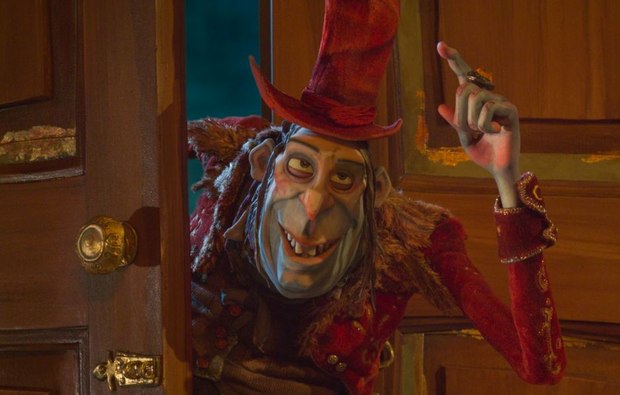 The headliners in Laika’s latest stop-motion animated feature are a bunch of adorable, unwashed oddballs called The Boxtrolls.  As delightful as they may be, however, one character basically steals the picture away from them – the smiling scheming Archibald Snatcher.  And how could he not, with his smarmy persona, voluptuous form and obsession with dairy products?  As a man determined to gain access to high society by hunting down the pesky creatures who prowl his streets at night, he’s a villain cut from the same cloth as Cruella de Vil and Ursula the Sea Witch and nothing could please Georgina Hayns more.  As Laika’s creative supervisor of puppet fabrication, she’s overseen every step of his journey to the silver screen and knows firsthand how much work can go into making evil look effortless.  A special guest of honor at this weekend’s sixth edition of the Montreal Stop-Motion Film Festival, Hayns took a few moments prior to her departure to share some insights into how this baddie came to be.

James Gartler:  I have a sneaking suspicion that Snatcher is going to become one of the most beloved characters in all of stop-motion.  Tell me, where did you begin with the design of the character and how did it evolve?

Georgina Hayns:  Well, we had an amazing character designer named Mike Smith and he designed all of the characters.  His initial drawings would always be a sketchy black silhouette and everyone was completely drawn to those illustrations because they had such vivid life in them.  Poor Mike wanted to take everything through to a finished colored level and we made him design all of the characters in silhouette! [laughs] It took a long time to get the final Snatcher design because he had to be bad but he couldn’t be so disgusting that he’d be in your nightmares forevermore.  There had to be an appeal and a comedy factor.  Mike managed to get that in one of the silhouette drawings he’d done and we all knew, “that’s him!  That’s the guy!”  At that point we handed the illustration over to Kent Melton, who is a really phenomenal maquette sculptor and he worked in conjunction with sculptor Toby Froud [son of artist Brian Froud].  He did a couple of turnaround sketches just of Snatcher’s head, passed those to Kent and then Kent worked from the sketches and did the most amazing maquette.  That was the first time we saw Snatcher as the character he was going to end up being in the movie.  I think we all were like, “oh wow – he is fantastic!”

JG:  I’m guessing it’s no coincidence that the rotund Snatcher comes into conflict with a character named Lord Portley-Rind, who is rather trim…?

GH:  We took the story from Alan Snow’s book Here Be Monsters! and Snatcher is described very brilliantly there as being well fed but in a slightly grotesque manner, whereas Lord Portley-Rind is well fed in a very aristocratic manner.  Our characters are quite different from the original illustrations in the book but we always wanted them to be opposites.  Snatcher strives to be Lord Portley-Rind and is never quite able to achieve that so their designs came out of them being diametrically opposite. GH:  Yeah, we have that problem with a lot of our puppets.  It’s interesting how character designers always want to design characters with tiny ankles and big heads or big bellies!  From Coraline up to The Boxtrolls, we have perfected the designs of the joints which hold these puppets up, but there’s always a place where the puppet will be top-heavy.  The rigging department works in conjunction with us so that if there is a top-heavy puppet then certain rigs come into play.  That way, we don’t always have to worry about practicality and can instead just think of the artistic realm of the film.

He does have a really interesting stomach.  Those kinds of attributes always get the puppet department very excited because the first question we ask the directors is if they want movement in the stomach.  Then, these very deep intense conversations follow.  What kind of movement would we like?  Would we like a pendulum stomach or an up and down movement to the stomach?  [laughs]  We all agreed we wanted an up and down movement to the stomach as he’s going along.  If the stomach is the right shape, the animator can actually hold onto it and pivot it on a ball-and-socket joint, but with Snatcher’s it was so round and a little too big for the animator’s hands so we had to develop a gear system which the animator would access through the back of the costume.  With one turn of an Allen key it would move just a fraction at a time, so we actually got quite a lot of movement in it.  Most of the time you see the puppet, he’s got this gear mechanism in his belly.  We actually use the tuning gears on guitars, which we buy from the manufacturer and customize to our needs.  The reason we use Allen keys is that they are quite small so it prevents the costume from being damaged too much.  The costume makers will leave little access holes allowing us to go in through the back of Snatcher’s costume, like the split of the two tails on his coat, and use the Allen key in there to access the gear. JG:  Is it true that you used a laser to create the patterns on the costumes?

GH:  It was sort of a happy accident.  The laser cutter was brought in for the art department because we knew there were going to be lots of intricate wooden cutouts for the set pieces, but we quickly realized that it could also cut fabrics and that you can actually dial the laser beam to a level of cutting so you can just etch the surface of the fabric.  So we started to play with making our own devoré velvet, which was very prominent in the time period that The Boxtrolls is set in.  It was great because trying to find that fabric with the designs from the period we wanted to the scale we needed was impossible.

JG:  Speaking of costumes, one of the most memorable in the picture is probably Madame Frou Frou’s dress…

GH:  We did Frou Frou’s dress towards the end of production because it wasn’t in many scenes.  The designer very much took influence from ‘80s disco wear because we wanted her to stand out from the crowd so it’s quite tight around the bodice and down the legs.

JG:  Her song-and-dance number was quite the sight!

GH:  Yeah, we like to go out there and test our audience a bit! [laughs]

JG:  A big reason why Snatcher is so compelling is Ben Kingsley’s brilliant vocal performance...

GH:  When we initially approached him everyone thought he wouldn’t accept the role but he loved the comedic aspect of the character.  I think that he thought it was much more comedic than it actually sounded.  We were all terrified most of the time! [laughs]  He brought a sort of dark humor to the character. JG:  His line readings and the way he drew out certain phrases must have really helped in bringing the puppet to life…

GH:  I think he was a real joy to animate.  Because he’s in the film so much, we made about fifteen different Snatchers and several animators had to take on his sequences, but he’s still one person and a very believable character.  And as a puppet goes, he’s got really good proportions.  Other than his belly, everything else is long limbs and expressive hands and wonderfully long straggly hair, so they all went to town on him.

JG:  And his face was compelling from every angle.

GH:  That’s good to hear!  Without the technology that we use for replacement face animation, he wouldn’t be the character that he is.  Until ten years ago, stop-motion facial animation was either mechanics, claymation or replacements but the replacement animation was restricted because you had to sculpt every face.  Using a 3D printer has allowed us to go above and beyond with the facial performance and I know that Travis Knight was really keen on pushing facial animation even further on The Boxtrolls than we’d ever seen before.  We actually distorted and stretched the paint and the skin and Snatcher’s face lends itself to that.

JG:  Were you able to keep the paint on the faces so consistent because they were printed directly onto each piece?

GH:  Yeah, those lines are all printed in.  There was a lot of testing done with the printers as to how much the lines could move without it being a distraction.  But on all our movies, the paint department is doing as much research as the costume department.  They started to look at how the painters at the turn of the century depicted flesh tones and we found that European Expressionist painters of the time were adding a green line or orange line as edging.  It’s very theatrical but when you stand from a distance and look at the canvas it just looks like a real character.  So we really wanted to bring that through and you see it in the costumes as well as the faces.  We always offset the main color with a line in an opposing color.  Eggs has a turquoise line edging his nose and eyebrow, yet the rest of his face is flesh covered.  Even the Boxtrolls have little hints of opposing color against their blue or green, but you don’t really notice it. JG:  The Montreal Stop-Motion Festival, where you will be a guest of honor this weekend, seems to stand alone in that it offers audiences the chance to immerse themselves specifically in all aspects of stop-motion animation.  Have you come across any other festivals that do the same?

GH:  I’ve been to some wonderful festivals but most of them have to have some other element to them.  To have this completely designed around stop-motion is fan-tastic!  It’s a rarity and I think it will grow because stop-motion’s growing around the world.  Nearly twenty years ago, I was working on Mars Attacks when it went from stop-motion to CG, and when that happened we all went, “is this going to be the end?”  From that day on, though, I’ve never had a day off work.  There’s something magical about stop-motion that is always going to keep audiences wanting to see more.

JG:  Are you by any chance bringing Archibald with you to the festival?

GH:  I am indeed!  I’m bringing him, a Boxtroll and Eggs, so you’ll get to see them in the flesh!

Georgina Hayns will give a special behind-the-scenes presentation of Laika’s work on The Boxtrolls this Saturday, September 27th at 7:00 as part of the Montreal Stop-motion Festival [http://www.stopmotionmontreal.com/en/index.html ].  The Boxtrolls opens in theatres across North America today.