Turkish/French co-production comprising more than 13,000 hand-drawn frames brings empathy and care to cases of horrific sexual abuse and their aftermath. 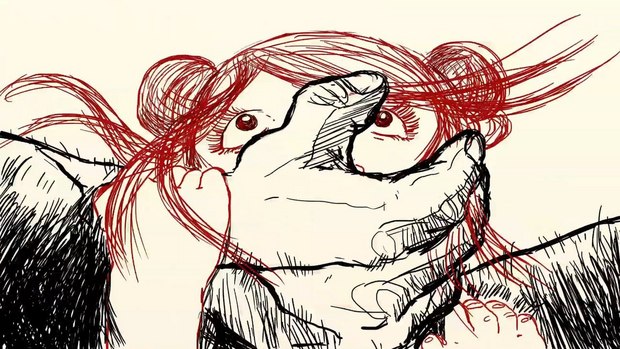 Out of the many strong short films presented at this year’s edition of the Ottawa International Animation Festival, one standout project was the 2D animated Wicked Girl (Kötü Kız), which was awarded Best Narrative Animated Short at the event.

Written, designed and directed by Turkish animator Ayce Kartal, who also storyboarded, illustrated and animated the incredibly moving, eight-minute short, Wicked Girl is a portrait of S., an eight-year-old  girl with an overflowing imagination who is keen on nature and animals. While she is looking back on the good old days in her grandparent’s village, dark and terrifying memories emerge and, little by little, begin to make sense.

Kartal began his studies at the Fine Arts program at Anadolu University in Eskişehir, Turkey, graduating from the Animation Department in 2000. He remained at the University as a Research Assistant, earning an MFA in 2004, and went on to complete the Time-Based Arts Pre-PhD program at UNSW Sydney. He also won a scholarship to study Film Directing at the New York Film Academy, graduating in 2009.

“In Turkey, if you happen to be an artist, it means it’s a very sad thing for the families because this makes you really poor,” Kartel wryly comments. His previous short, 2016’s Birdy Wouaf Wouaf, follows an adorable bird used to being pampered by his mother and father -- until the day he starts barking. Before that, in 2013, Kartal released Backward Run (Tornistan), which criticized press censorship of the Gezi Park protests that occurred in Turkey between May and July that same year.

Wicked Girl was produced by French prodco Les Valseurs in co-production with Gao Shan Pictures, located on France’s Reunion Island, and is being distributed by uniFrance label Arte France. Currently making the festival rounds, Wicked Girl has also screened at TIFF, HAFF, KLIK, and more, winning prizes at Annecy, the Fantoche Festival and Croatia’s Supertoon Festival, among many others.

With empathy and care, the hand-drawn short delves into one of the most horrifying traumas society can deliver: the rape of a little girl and its aftermath. The story is told in the girl’s perspective from her vantage point in a hospital room, where she plays and draws, accompanied by her own sing-song recounting of the associations and memories that begin to emerge from her harmless games. Kartal performed extensive research for the film over the course of six months, reading articles and personal accounts, and even visiting pediatric psychiatric wards at Turkish hospitals to observe first-hand children dealing with the fallout from their own violent ordeals. “My film is based on a true story,” Kartel begins. “There were many very bad incidents with sexually abused children in Turkey, and after I learned about them, I decided to make a film about it. And my question was, ‘What is happening to these victims after we forget about them?’”

“Most of the things that I read were about adult victims,” Kartal recalls. “So, I couldn’t find enough information about what’s happening to children after rape. Then I found myself in a hospital at the pediatric psychology department, where I had a chance to interview the doctors and observe some of the child patients. And then, finally, I began to understand that most of the patients fall into schizophrenia. So schizophrenic behaviors were my key point while I was writing this story and creating the main character of the film.”

For Kartal, the most important question became how to illustrate schizophrenia and how the illness functions within the mind of a child. He also put thought into how to design the main character so that she was relatable, but still stood out. “I tried to create a very simple character; just a girl, not any size, not anything else,” he says. “I put red hair on her because it’s a color that draws attention. She doesn’t have anything special, but you see her.” The little Turkish girl -- S. -- is voiced by Zeynep Naz Daldal, an actual, real-live, little girl. Kartel searched for months for a family that would allow their child to perform as a voice actor in the film, initially hoping he might be able to identify a range of talents to choose from and select the one that suited him most. In the end, only one family agreed to participate, but the voice was exactly as he had imagined it.

Daldal’s family agreed that she could lend her voice, but insisted that she not be exposed any of the visuals from the film, in which monstrous creatures inspired by drawings Kartal had seen during his research are brought to life.

“I was very lucky,” Kartal says. “She was really, really talented, more than what I expected. And it was my first time working with a child, so both of us experienced the same first time together, and it was really okay.” Kartal drew more than 13,000 frames by hand to create Wicked Girl -- roughly 90 percent of the finished film -- over a period of one-and-a-half years. While he enjoys sketching with pen and paper, his primary drawing tool is the Wacom tablet and digital pen, which gives him more control and artistic freedom to explore designs.

The original plan for producing Wicked Girl called for Kartal to be less involved in the actual animation, but when a new feature film project at Gao Shan Pictures called for a changeup in staffing, he decided to step into a more active role. “The first shots were very, very successful. It was a good venture,” he recounts. “Then [the production company] took the senior animators from the film and replaced them with junior animators, because the seniors went to a feature film project. It was kind of a very bad thing. So, the quality decreased, and I said ‘No, I’m not going to work with you.’ And I said, ‘I will draw.’ That’s why I drew so much of it myself.”