Premiering today on Netflix, the new CG animated series, based on the five-time Eisner winning comic ‘Usagi Yojimbo,’ pits the cotton-tailed warrior, Yuichi, and his team of fighters against monsters, ninjas, and evil aliens threatening the city of Neo Edo. 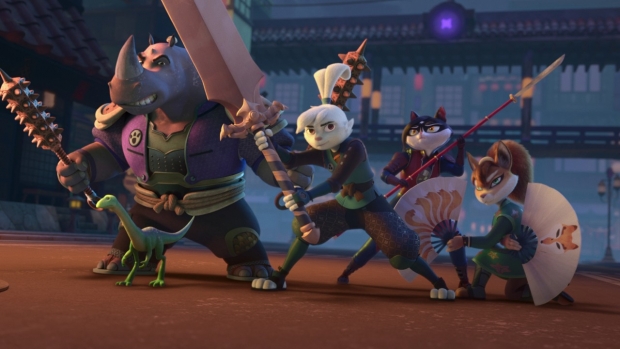 “I’m very happy with it,” says Sakai, who serves as an executive producer on the new show, Samurai Rabbit: The Usagi Chronicles, releasing on the streamer today, April 28. “I've been involved throughout the entire process and I love what everyone has done together. It was like the perfect storm where everyone just meshed together and jelled and turned out this really incredible series.”

“It's a character-driven story, first and foremost,” says Sakai, who’s also known for his time as a writer on Teenage Mutant Ninja Turtles. “Each character has a backstory and each one has to overcome something, such as Gen. He's a big, strong rhinoceros, but he's a hypochondriac.”

He continues, “I think animals are universal, and you can have the characteristics of each animal either play towards the character, or play against the character, such as a rhino who's big and strong, but is so terrified of getting even the smallest cut. It’s a nice place to play.”

Samurai Rabbit writers and showrunners Doug and Candie Langdale, who previously produced on Maya and the Three and now executive produce with Sakai on this new series, agree that animal characters offer a unique avenue of storytelling and an advantage to tackling themes of violence.

“The show's called Samurai Rabbit, so you know there’s going to be a lot of fighting in there,” says Doug. “But I do feel like the fighting feels a little bit less threatening to a young audience when it’s about animals. And, because of that, it enables you to tell stories that you might not be able to tell with human characters, because it would be just that little bit too real.”

Candie adds, “I feel like if there's a scary element, or something that makes a young viewer feel vulnerable, having the characters be animals gives the kid a little bit of a cushion so it feels a bit safer to watch. I actually hope the viewers walk away feeling like they made new friends because that's such a big part of the show.”

Sakai’s original comic series, which is still publishing new volumes, was inspired by his own childhood fascination with samurai films.

“I grew up in Hawaii and just down the street from me was an old theater that, every weekend, would show samurai sword fighting movies,” says Sakai. “I remember seeing The One-Armed Swordsman, The Blind Swordsman, and every other iteration of swordsman. So, when I grew up and decided I wanted to create a comic book, I thought about my childhood.” Sakai initially considered creating a comic series about Miyamoto Musashi, a real samurai who lived at the turn of 17th century in Japan and was regarded as, in the words of Sakai, “the epitome of what a samurai should be.”

“But when I was drawing in my sketchbook one day, I just did a picture of a rabbit with his ears tied up into a samurai top knot and I loved the design,” he recalls. “It was simple, and it was unique. No one else had ever done it before. So instead of Miyamoto Musashi, I named my character Miyamoto, ‘Usagi,’ which means ‘rabbit’ in Japanese.”

Usagi Yojimbo’s first volume, about a samurai rabbit who goes on a warrior's pilgrimage selling his bodyguard services, was published in 1984, and Sakai has since published over 200 volumes. The series was awarded a Parents' Choice Award in 1990 for its educational value for the way Sakai's incorporates historical facts and legends into his stories.

“I've got drawings of Usagi dating back to 1982,” says the cartoonist. “It's been 37 years, almost 38, and Usagi has gotten a lot of recognition. I've won a lot of major awards and now we have this Netflix series. It’s incredible. It’s just amazing.” While Sakai’s comics take place in feudal Japan, Samurai Rabbit takes place in what Sakai calls a “mish-mash” of the future, the present, and the past. The city of Neo Edo has all the traditional architectural structures of Edo-period Japan, but with flying cars, arcade games, karaoke, vending machines, and more.

“The story itself lends a lot to the visuals already, where you have the stories of Miyamoto Usagi and the current adventures of his descendant, Yuichi,” explains art director Khang Le, known for his art direction on Star Trek: Lower Decks. “That alone gives us a very distinct contrast. But the challenge really is to unify those two things. After some trial and error, we finally landed on taking Neo Edo’s architecture, very iconic Japanese architecture, and combining that with modern Tokyo.”

He continues, “So you’ll see skyscrapers that are made with the same architectural details that you'd find in ancient Japan. You’ll see vending machines and modern signage; you have elements that look like Edo-period Japan, but they’re also combined with my personal experiences visiting Japan. It’s one of my favorite places and I’ve really tried to instill flavors that I experienced there in addition to staying authentic to the world Stan created 37 years ago.” Some parts of Neo Edo are directly inspired by Dōtonbori, a famous street in Osaka.

“It's a little bit touristy, but it's also very inspiring for us to build this world based on that street because you have all these giant sculptures and statues of crabs and fish, which are really fun,” says Le.

Doug adds, “We also watched a lot of walkaround videos of Tokyo and other parts of Japan. The whole time that we were developing this world, we have those videos going just constantly. We've gotten to the point where we feel like we could find our way around Tokyo now, even never having been there in person.”

Le also chose to make Samurai Rabbit’s sets modular, to add to the feeling of the world’s vastness.

“That idea came out of the fear you feel when you arrive in a big city for the first time,” Le says, laughing. “It was also one of the biggest sets we’ve ever built -- the restaurants, the arcades, the shops, the streets, it’s all part of the same city set. It all goes together. And it was my first time working with 3D animation. But I think it turned out great. Hopefully, when people watch the show, they’ll feel like they’re walking around Neo Edo with our characters.” Sakai attests to the show’s visual greatness, even saying it was Le’s initial concept drawings that made him certain of the show’s future success. Of course, the show’s interwoven use of 2D animation for select scenes, to pay homage to Sakai’s original comics, was also a moving experience for the creator.

“Whenever there's a flashback or fantasy in that 2D animation, it's just amazing,” Sakai shares. “But the first drawing that Khang did of Neo Edo’s cityscape, it blew my mind and that's what really convinced me this could be a series and it's going to be good. Neo Edo is a fusion of futuristic elements along with the traditional, which makes it unique. The whole setting is marvelous and has such imagination put into it.”

One of the biggest challenges, however, was creating a Japan that wasn’t only futuristic, but futurized without a trace of any outside influences.

“We wanted to keep the western styles out of things,” explains Doug. “The idea behind the show is that feudal Japan has received this powerful stone that’s dictated all of their technology, so it’s a city that’s developed without any outside influences. On top of that, there are no electronics, there are no screens, and there are no cell phones. All the power comes from this stone, so everything is brute force technology.”

Candie adds, “But having to come up with all the arcade games that didn't involve computers, electronics or screens, was, honestly, very fun. I love the automatons, those Victorian-era machines. So that was a huge place we drew from.” With all these moving parts (literally and figuratively) it’s impressive that Samurai Rabbit was created one hundred percent remotely, with teams in the U.S., India, and France. No two actors were ever in the same sound booth, no two writers in the same writers’ room.

And though it’s been a trial, the team has come together as friends and filmmakers to produce a stellar series devoted to the theme that bound their team: unity.

“What a lot of what Samurai Rabbit has to do with is friendships and loyalty and honor,” says Sakai. “And those are the big tenants of Bushido, the way of the warrior, of samurai. And I hope that those qualities come through in the series because these characters are individuals, but they come together too as friends and then as a group. It’s a powerful journey.”

Taking an Old-School VFX Approach in ‘All Quiet on the Western Front’
‘Natural Habitat Shorts’: Like ‘Ranger Rick,’ But for Adults
Framestore Sets Sail on ‘1899’ with New Virtual Production Tools
Animated Characters: The Art of Babbitt – Part 1
Bruce Smith and Ralph Farquhar Talk ‘The Proud Family: Louder and Prouder’ Season 2
VFX is the ‘Thing’ for Tom Turnbull on Tim Burton’s ‘Wednesday’
We Need to Chat
F is for Flake: The (Not So) Great Animation Robbery?
END_OF_DOCUMENT_TOKEN_TO_BE_REPLACED