‘Ryoma! Prince of Tennis’: A Story of Legacy and Fatherhood

Hitting U.S. theaters today, May 12, the franchise’s latest addition, based on Takeshi Konomi’s 1999 manga, tells the story of a tennis prodigy, looking to up his game, who's suddenly transported back in time to his father’s final championship match where he was mysteriously forced to retire. 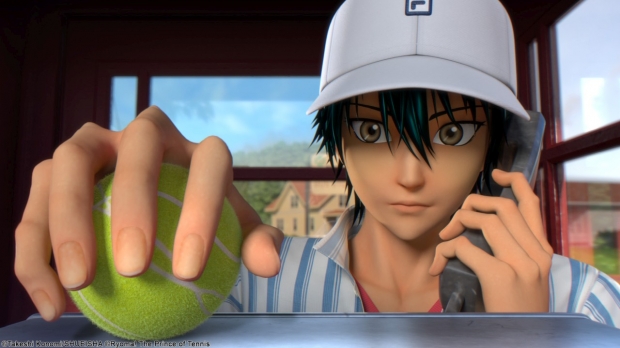 Mid-match musical numbers, time travel, and tennis mafia. Ryoma! Prince of Tennis, releasing in U.S. theaters today, May 12, is a casserole of slapstick comedy and unexpected action melded together with beautiful 3D animation. The feature film is the latest addition to The Prince of Tennis media franchise, which consists of the 1999 manga by Takeshi Konomi, a 2001 anime series, more than 15 stage musical adaptations, a radio show, numerous video games, a live-action film, and even two Chinese dramas based on the story.

But it’s not the high-energy returns and backhands that make The Prince of Tennis so popular.

To Howard Wang, ADR director for Ryoma! Prince of Tennis and long-time fan of the anime series, it’s the relationships that set this story apart from other sports anime and make it irresistible to those who want to expand on the story.

“Most of the time, a sports anime focuses on the players, the bond with their teammates, and how that allows them to win at the game,” says Wang, who has also voiced characters on sports anime projects like SK8 the Infinity, Free!, Kuroko's Basketball and Haikyū!!. “I think Ryoma! is special because it centers around the relationship between a father and son, and how that relates to the core motivations of our protagonist.”

“The story has a surprising amount of heart put into it,” adds Ry McKeand, who voices Ryoma in the film. “It’s got some fun and funny moments as well but, at the end of the day, it maintains its themes and is able to deliver a solid story for Ryoma and his dad. Experiencing that story while recording, and making sure that we had every moment land perfectly, was one of my personal highlights of working on the film.” Presented in partnership with anime distributor Eleven Arts and fan convention Anime Expo for its inaugural AX Cinema Nights, Ryoma! The Prince of Tennis follows tennis prodigy Ryoma Echizen who, inspired by his tennis champion father Nanjiro, is determined to take his game to the next level and train in the United States. But in the middle of an intense tennis battle to save his classmate Sakuno from dangerous villains, they somehow find themselves transported back to the past, just as Ryoma’s father is about to undertake his final championship match at the U.S. Open - where he was mysteriously forced to retire.

For Wang, working on this film has been, without any exaggeration, a childhood dream come true.

“I am a huge fan of the original series, and it was an incredibly influential part of my childhood,” he says. “I played tennis competitively since middle school, just like the characters in the show, and I spent a bunch of time on the court trying to copy the moves from the anime. The Prince of Tennis on the big screen is also something I never thought would happen in the West, so it’s pretty surreal to me.”

Xanthe Huynh, the voice behind the film’s main heroine Sakuno and a fellow fan of the original anime series, adds, “It has a great blend of comedy, action, drama, and is just ridiculous enough to be exciting and fun. To see the characters in this 3D style compared to their original 2D counterparts has been really cool! As we were starting and stopping during the recording process, I was blown away by how beautiful the details in the clothing and LA locations looked.”

“Tennis was an inordinately big part of my life,” says David Wald, the voice behind the film’s main father figure, Nanjiro. “It was the only sport I ever cared about at all. I had a Get Smart corridor full of walls and portals between me and sports. But my parents were avid tennis players. They weren't pros, but they were league players for the entirety of their lives. And I actually really enjoyed playing tennis with them when I was a kid, and I was a regular player for a really long time. Prince of Tennis, however, is as close as I’ve gotten to picking up a racket in 20 years.” “I thought the designs struck a really lovely balance between the source of the anime and the capacity of 3D modeling,” says Wald. “I thought it was brave, actually, of the artists to decide, for this project, to animate it quite differently. And it was to their advantage. The choice to go to 3D for the film offered a beautiful opportunity to give you a little bit more of the sense of the shape and speed of a game of tennis.”

Even more tangible for Wald were the memories the film brought back of his own father, the two’s relationship not unlike Nanjiro’s with Ryoma, which all cast members agree, is the heart and soul of The Prince of Tennis’ entire legacy.

“It was always around the moments where Nanjiro was trying to be warm to Ryoma and making it a bit of a bumpy road,” explains Wald. “Moments like, ‘I don't quite know how to say I love you kid, but I'll say it every other way I can think of.’ I had a very similar relationship with my father, who passed some years ago.”

He continues, “My father was a very stoic man. He certainly did not have the outward sense of humor and sense of mirth that Najiro has but, like Nanjiro, my dad was not very good at communicating his emotional truths. So I really felt my own dad in Nanjiro on many occasions, just sort of trying to be the warm and soft dad but with always a little something in the way. I got to see that from a different perspective recording this film and that was a singularly enlightening experience.” Ryoma’s unprecedented chance to view his dad play tennis at the height of Nanjiro’s career is, in fact, an opportunity that Wald himself would have leaped at. He notes, “Ryoma gets to have this experience we all kind of crave. He gets to observe a version of his father, in his prime, at the top of his game, doing the thing he did best in the world. That's an experience I certainly never had with my father, who was already 46 years old by the time I was born.”

Wald, Wang, and the rest of the cast hope that Ryoma! The Prince of Tennis not only serves as a celebration of a popular and beloved franchise, but also encourages viewers to cherish the stories of their parents.

“For audiences attending the movie, I hope they walk away curious about what their own parents were like in their prime,” says Huynh.

Ryoma’s story - both in film and series - is a story about connection and Wang says his ultimate wish for the film is that it acts as a draw to bring more people into fandom for The Prince of Tennis, for which Funimation recently produced an English dub, featuring both Huynh and McKeand. “The trailer Howard had shown me was of one of the first musical numbers of the movie and, admittedly, I died of laughter,” says McKeand. “I was still relatively new to the franchise and didn’t fully understand the huge scope of projects that had been made or even existed. But There’s so much heart and soul put into these characters. Deep down every character you find in the franchise has really strong motivations and feels very real.”

“I believe that The Prince of Tennis can be appealing to anybody with the combination of sports action, engaging character relationships, ridiculous comedy, and more, but the giant cast of characters is what especially makes the story interesting,” adds Wang. “I really hope that audiences, whether they’re familiar with The Prince of Tennis or not, can enjoy this film and walk away with a deeper appreciation for the characters and this franchise.”

Ticket information can be found here.