In the Running: An Independent Look at the Oscar Nominees for Best Animated Feature

AWN’s Chris Robinson suits up to present his arguments for and against a range of conceptually and aesthetically formidable contenders for best animated feature at the 89th Academy Awards. 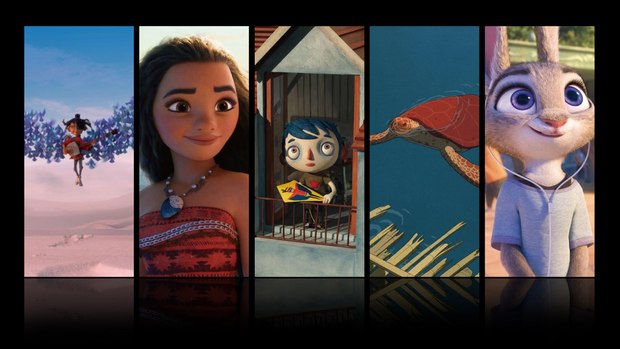 In the festival or indie world of animation, there has never been a single year yet where you’d say that the features were superior to the short films. Part of that is owing to imbalance; there are significantly more short animated films produced each year. In the world of the Oscars though, this year’s features nominees are conceptually and aesthetically stronger than almost all the short film contenders.

Let’s have a look…

My Life as a Zucchini, Claude Barras (France/Switzerland) No animals. No songs. No exotic locales. Instead, we get an orphanage, an alcoholic mother, and abusive and negligent adults. A nice departure from the standard family fare. Now… the ending requires a pretty big stretch of the imagination (plus, I don’t trust cops) but they needed to do something to restore order and peace to the narrative. Personally, I’d prefer to see a version that follows the life of Simon and all the other kids who never find a home and are stuck in the orphanage ‘til they’re 18 before turning to drugs, prostitution or journalism. Now that would be a special film. That said, the design, animation and story are all quite unique and off the beaten path for a mainstreamish film. Still, given all the advance praise I’d heard, I was a somewhat disappointed with the heavy pathos and sentimentality. I dunno what to really say about Moana. It’s like every other Disney film: young protagonist rebels against older generation. Accompanied by some goofy sidekicks (I dig the chicken) and whole lot of Broadway songs (I dig Jermaine Clements’s “Bowie” scene), said rebel embarks on a quest to overcome some sort of villainous beast (really just a metaphor for “coming of age” and finding your identity) and stick it to the elders. This time the characters have brown skin and live in Polynesia. I’m not a multi-cultural expert, but I’m pretty sure that being culturally sensitive -- or even gender sensitive -- doesn’t mean you just make your protagonist a woman, colour your characters differently, and then toss them all into the same formulaic Anglo/Caucasian narrative you’ve been using for half a century.

My gauge for rating mainstream cinema is how angry it makes me. I felt no rage watching Moana. It was an enjoyable little ride. It’s Disney doing Disney. They know their strengths and comfort zone and never stray too far from that and at least they are making some sort of gesture toward gender and race -- however naïve and cosmetic.

Plus, I do like the message -- even if every damn mainstream feature is ultimately (does Joseph Campbell get royalties?) about a protagonist overcoming some obstacle to find themselves. Do you blindly follow tradition and just be content with what you have or do you stubbornly light your own path in search of the possibility of something better?

It’s a fair and important question.

I wonder what the chicken thinks.

Hmm… I don’t really have much to say about Kubo. I enjoyed it for what it is: a beautifully crafted, animated and designed commercial animation production. It’s an original and imaginative variation (I like that young Kubo is artistically inclined and into guitar and origami) of the hero quest narrative and, thankfully, has no songs.

What did raise my anger metre was the choice of voice actors. Kubo is set in ancient Japan. Okay, I get -- I guess -- that you need some star power to help get the film made and out there, but how on earth can you justify using the distinct, husky Brooklyn-bred voice of Brenda Vaccaro for an old Japanese woman!? Frankly, that whole scene in the local village near the beginning of the film felt like it was right out of an accidently hilarious English dubbed Asian film. Maybe it was meant to be a knowing nod to those films. If so, kudos to the Kubo team for that inside joke. If not…

A protagonist (this time a female bunny) has a seemingly impossible dream (moving to the big city to become a cop). Her parents try to talk her out of it. She ignores their concerns (moves to the city, becomes a cop) and eventually proves all her doubters wrong.

Seem familiar? Yep, that good ol’ quest of the hero.

But you know what separates this from Moana and Kubo? It doesn’t quite take itself as seriously and yet, there’s a lot of interesting issues subtly lurking beneath the comic surface. Now the comic timing and writing are solid (the inspired sloth scene has already become legendary), but within that framework, the creators also manage to slyly comment on gender and race. On the gender front, Judy is pretty punk. She doesn’t just overcome small size, but also a world of large, bullish, conniving males. And most beautifully, this all takes place in a world where predators and prey, all forms of animals, co-exist.

It’s also noteworthy that Zootopia includes an intriguing and inadvertently timely plotline about officials manufacturing a fear of “other” (in this case, the predatory animals are drugged with something that makes them go ape-shit) to re-assert the supremacy of a specific “race” (here, prey animals). Bah… but that’s total fiction. That stuff doesn’t happen in reality. Right? First, kudos to Dudok de Wit (who made the much acclaimed short film, Father and Daughter way back in 2000) for having the courage to make an entire feature sans dialogue. It’s hard enough for creators of short animation films to shut up for a few minutes, so to pull it off for about 80 minutes, well, that, sir, is worthy of an award. The Red Turtle’s best moments are those of silence like when the man and woman are just sitting by the ocean and all we hear are the sounds of the waves. That single scene has more emotive power than any of the musical sections -- which are too often heavy and melodramatic and simply unnecessary (which, if memory is correct, was also a problem with Father and Daughter and possibly reflects either an insecurity or refusal to let the imagery and story reach the audiences naturally, without the aid of a musical sensory steroid).

The Red Turtle is also the only nominee to shun the hero’s journey structure. There really are no heroes here. This isn’t necessarily a film about a shipwrecked man (though it’s possible that this man has left another life behind). The island might be a metaphor for individual existence. We are all islands drifting about in the sea encountering and avoiding and ignoring other islands. Sometimes those islands come together, but ultimately, we enter and leave alone on our island. So what we are seeing in Red Turtle is not a stranded man struggling to survive, but rather a microcosm of the man’s entire adult life (he lands on that island at about the same age his son must be when he eventually leaves that same island).

One aspect of the story that I found a bit confusing and unsatisfying was the turtle/ female character. Now, in Native American culture, turtles are a symbol of mother earth. That seems to fit with the what’s unfolding here. After the men are gone, the woman returns to the water and reassumes the form of the turtle. But I dunno, that whole mystical angle seems a bit cornball to me, and taken that way seems to reduce both genders to tired ancient archetypes (man as hunter, woman as nurturer) and that seems at odds with most modern sensibilities and beliefs.

What should win: The indie side of me says I should cheer on The Red Turtle and My Life as a Zucchini. They both – in the context of the animated feature - address unique subjects in a wholly imaginative and refreshing way. But nope… can’t do it…. it should be Zootopia.

What will win: Zootopia. It’s funny and yet also manages to touch on a slew of social, cultural and racial issues without beating us over the head with it.

What’s really the best animated feature of the year: I’m torn between the poetic Louise en Hiver (which shares much in common with The Red Turtle) and the haunting Spanish feature, Pscionauts, The Forgotten Children. I think people need a dosage of both.

SCAD Alumni Talk Animation Skills, Careers, and Opportunities
Digital Domain Pushes the Limits of Monstrous VFX in ‘Morbius’
An Interview with Priit Pärn
‘Baymax!’ Provides an Rx for Humor and Compassion
How Digital Domain Brought Photoreal Characters to Life in ‘The Quarry’
Mission Critical: ‘Lightyear’s Journey to Infinity and Beyond
‘The Freak Brothers’: This is Your Humor on Drugs
END_OF_DOCUMENT_TOKEN_TO_BE_REPLACED