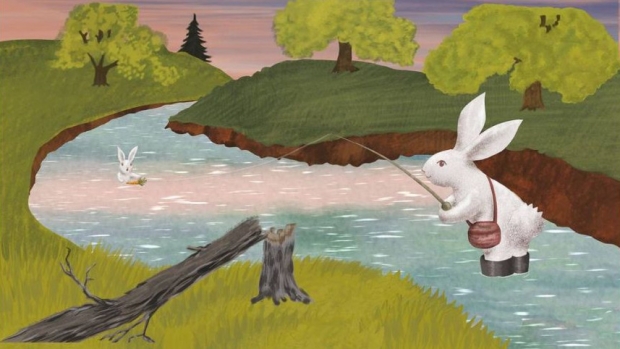 First published in 1942, The Runaway Bunny is one of the many iconic children’s books by famous “Goodnight Moon” author Margaret Wise Brown; its poetry tells the story of a young bunny anxious to leave home and adventure out into the world beyond his rabbit hole, while also discovering the unending reach of his mother’s protection and love. Originally published in 1942 by HarperCollins Publishers, the book has sold over 12 million copies.

“Working on this during the pandemic was definitely a challenge, but it has also been very meaningful; working to put something into the world that's about love can be so soothing when we've all been through so much this year,” explains Schatz, the film’s producer and director. “I love creating and meditating on nature and I felt very fortunate to create something about a little bunny in the grass who comes to the conclusion that there's no place like home.”

“The book is so timeless,” adds Albrecht. “And this film may really touch a new generation as well as people who remember the book from when it was read to them in the past.”

This is not Schatz and Albrecht’s first time animating a Wise Brown story adaptation. They previously worked together on the 1999, 30-minute TV movie Goodnight Moon & Other Sleepytime Tales, as well as other HBO children’s shorts such as Classical Baby. Albrecht is also revered for his bunny illustrations, having directed the 2006 animated short Knuffle Bunny: A Cautionary Tale; he was also animation director on Schatz’s ‘Twas the Night, featuring a bunny sailing solo on the ocean. Schatz’s productions have earned multiple Emmys, Directors Guild of America, Peabody, and Parents’ Choice Awards, including a 2020 Emmy win for outstanding children’s program for We Are the Dream. “He’s not only able to bring classic illustrations to life, but he has a very special touch when it comes to bunnies,” Schatz says of Albrecht. “He's done a lot of them over the years and I just love the way he's able to capture the incredible tenderness in these animals.”

Hand-drawing and hand-painting each scene on tablets, Albrecht says their production team’s goal with The Runaway Bunny was to stay true to the tone of original illustrator Clement Hurd, even collaborating with Hurd’s son Thacher on the film’s animation. “Drawing by hand makes it more personal,” says Albrecht, who, paralleling the original imagery in the book, uses elegant, black and white pencil sketch animation for the dialogue scenes between the bunny and his mother, and full-color, oil-painting-like imagery for moments when the bunny is dreaming about his adventures. “We also used some textures from the book to stay true to the original illustrations. But the real challenge was to create the visuals which were not in the book.”

Adamant that she “didn't want to touch a word of the book’s narration,” Schatz had to turn a 3-minute read into an almost half-hour long film, narrated by Tracee Ellis Ross. That’s when the idea came to make the film a musical. “For me, music is the key to everything, and I feel like the roadmap was in the book itself,” Schatz notes. “The rhythms of Margaret Wise’s poetry and language are so compressed and beautiful and poetic, we knew that we didn't want to add any text to it. But there’s an interweaving of black and white and colored pages. And all the dialogue is on the black and white pages. And then there are these magnificent, full, two-page spreads of gorgeous, colored-in adventures that the Bunny goes on in his daydreams. It was in those color pages where we started to expand.”

In the original story, the young bunny proposes to his mother ways he could “fly the coop,” so to speak, such as becoming a fish in a trout stream to swim away or becoming a rock on a mountain high above his home. The bunny’s mother responds by saying she will become anything from a fisherman to a mountain climber to reach her “little bunny” wherever he is. Between each of his mother’s responses, the bunny dreams of his grand adventures, be it joining the circus or becoming a bird, all while imagining his mother coming to find him again. Schatz and Albrecht animated each of these daydream scenes to accompany songs by Grammy Award-winning and Grammy-nominated artists such as Ziggy Marley, who sings What a Wonderful World; Mariah Carey, who records a new rendition of her hit Always Be My Baby; Rosanne Cash, who sings You Are My Sunshine; Kelly Rowland, who sings Make You Feel My Love; and Rufus Wainwright, who performs Billy Joel’s famous Goodnight My Angel. “They're all love songs, and they mirror the message of the book, which is ‘I'll always love you - I'll always be here for you,’” says Schatz. “It's a soundtrack that really underscores that idea of ‘I'm always by your side.’ I think that the songs are as much for the parents or the grandparents watching as it is for the little ones.”

While the music tied a nice bow on the animation and added length to the storytelling, it also helped reinforce the message of a mother’s love over that of a domineering parent. Both Schatz and Albrecht have produced films and shows for children that tackle life’s tougher subjects - such as Schatz’s An Apology to Elephants and Albrecht’s Through a Child's Eyes: September 11, 2001 - and both say they recognized The Runaway Bunny as both a sweet story and a coming-of-age lesson.

“The tricky thing about this message is that it's really a psychological book,” Schatz reveals. “The films Maciek and I have made together over the years are really sophisticated, and they're not necessarily only aimed at little ones. They’ve got deep feelings. They make you smile, they make you laugh, and they make you cry, and it was important to be clear that the bunny’s mother lets the bunny play and go off on his own and doesn't actually ever rein him in or smother him with her love.” “We really tried to show the little bunny as independent,” Albrecht adds. “And the basic concept was to have the mom be somebody who is there when the child really needs her and helps him come back home.”

According to Schatz and Albrecht, this was a balance the team artfully aimed to achieve every day, the concept never leaving the forefront of their minds; it even informed the animation choices, based on how the mother bunny would look, or not look, at the little bunny to make him feel she was at ease giving her child the space he longed for.

“The direction we chose was to also limit mom's appearance, and I was constantly reminded not to show the mom getting too emotional,” says Albrecht. “With this story, it was easy to show how close they are, but we wanted to keep the focus on the little bunny; his mom is more in the background, whereas he is mostly on his own. But we still feel that he's missing mom, and she always comes at the right moment.”

Though Schatz believes one of the book’s original intents was to offer a comforting message to young children that their parents would always be able to find them and bring them home, her hope with the film is that the message received is more universal across various age groups.

“It’s been magic to be able to work with these iconic, beloved children's books,” says Schatz. “The idea of taking something that's so beloved and so classic and bringing it to life in a way that honors it, was something that we really dreamed about doing for years and years and it felt really gratifying to work with such great musicians and such great animation artists. My hope for it is that we’ve created something that will bring generations together. I want this to make people feel something, regardless of how old you are.”

Choc Chip Animation Riffs on Pop Culture in ‘The Art of Murder’
F is for Flake: The (Not So) Great Animation Robbery?
Re-VIEW: ‘Avatar: The Way of Water’ – A Miraculous Vision
‘Kung Fu Panda: The Dragon Knight’ Celebrates a Special Lunar New Year
END_OF_DOCUMENT_TOKEN_TO_BE_REPLACED