Tommy, Chuckie, Phil, Lil, Susie, and Angelica are back, now animated in CG, but still humorously exploring their world as only precocious youngsters can do; series premieres May 27 on Paramount+. 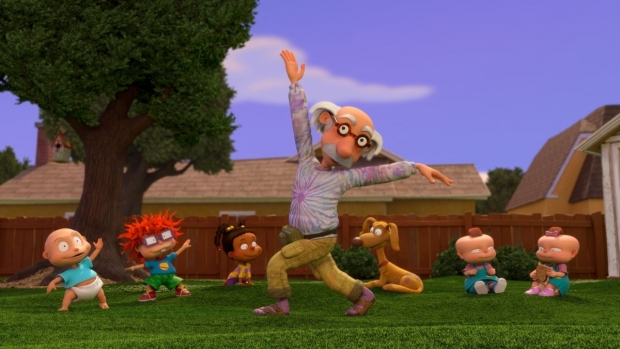 The series features the same fan-favorite characters – Tommy, Chuckie, Phil, Lil, Susie, and Angelica - returning voice cast, and creative team lead by executive producers Kate Boutilier and Eryk Casemiro alongside creators Gabor Csupo, Paul Germain, and Arlene Klasky. Both Boutilier and Casemiro were producers and writers on the original series, which first premiered on Nickelodeon in 1991.

“Rugrats is undoubtedly one of Nickelodeon's crown jewels,” says Casemiro. “You know how it is when you have a really good friend and you go for years without seeing them, and then you pick up right where you left off? It’s been just like that. I can write Chuckie or Phil until the cows come home. I love a good sarcastic Phil line.”

For Boutilier as well, getting back to work on the series again was like returning home. “Because it’s such a big part of my life, it doesn't feel that distant to come back to,” she says. “And because the characters are so strong, I can jump right back to writing for Angelica like it was 20 years ago. I still remember stuff I wrote for her then and I am bringing some of it back to this Angelica. As bad as she is, I love her little games. I love the creativity in her schemes.”

Casemiro adds, “It wasn't difficult to set the tone of the new Rugrats because these characters actually are so well developed from the first time around. They really transcend time.” The original Rugrats - which followed the adventures of babies Tommy, Chuckie, Lil, and Phil, as they were terrorized by conniving cousin Angelica - ran for nine seasons, with three feature films, two fairy tale-themed direct-to-video specials, and a 2005-2008 spin-off series, All Grown Up! The story of these babies went completely untouched for over 10 years, until Casemiro, Boutilier and the rest of the team began developing the CG reboot in the summer of 2019 for audiences young and old, still as fascinated with the world of babies as they were in the 90s.

“It's the comedy of watching babies interpret the world,” Casemiro explains. “What we all do with babies is wonder what they're thinking when they look at you or as they toggle around. It’s like the fascination with dinosaurs and mermaids. It never seems to go away.”

Boutilier continues, “We weren’t trying to reinvent the Rugrats. We wanted to maintain their charm and the way the series was written and the kind of stories we did. We want these shows to stand side by side 34 years from now.”

While most Nickelodeon Animation Studios’ sequel or reimagined series stay true to their original 2D animation format, the show’s creative team felt there were foundational changes and add-ons that should be made to the show’s dynamics.

“We started by saying, ‘Okay, if we can make adjustments, if we could change this world, how would we change it, knowing what we knew, we know from our past experience?’” says Casemiro. “A good example is, originally, the character Susie could speak to adults because she was as old as Angelica. But that was often an impediment for the story, because if Susie were aware of a plot that Angelica had hatched, she’d just tell the parents and then it would be over. So, we figured, if we made her more non-verbal to the parents, like the rest of the babies, and maybe more Chuckie’s age, then we could get a lot more Susie in the show.” Inclusivity is a theme for the 2021 Rugrats, including giving the parents more of a role than just as guardians that happen to be around because it’s a given that where there are babies, there should be parents.

According to Casemiro, “One of my big questions when I started on the series back in 1996 was, ‘Why are they always dropping these babies off at Didi’s for no good reason? So, we go into the backstory of the parents more this time, like how Didi works from home and she and Betty were college roommates and Chas and Stu have been next door neighbors since childhood. Drawing those lines deepened relationships the adults had, and it makes them feel more dimensionalized.”

But the biggest change to the series was also the team’s biggest challenge: giving Rugrats a modern-day visual upgrade. “When you think about it, it's 30 years old, and times have changed,” Casemiro acknowledges. “In the original, Charlotte Pickles is the only character that has a cell phone. Now, even Tommy’s iconic screwdriver has 20 programmable phrases it can say. When Nickelodeon approached us, it made perfect sense to do this series CG now because it allowed us to stamp that 21st century face-lift without losing any of the line language of the original 2D.”

Casemiro also notes it was a “painstaking process” translating the 2D caricatured children to 3D and trying not to cross over the lines of overly adorable and just downright weird. “If some of the asymmetry was not acknowledged, they got super cute, like too cute,” he says. “Because the Rugrats are slightly wonky and like ‘little monsters,’ according to our director, I think that translation was the hardest to get the tone right and capture the DNA of what was so brilliant about the original design work.”

He continues, “We had to make adjustments to the original designs too. Tommy originally had a very lumpy head, and it just didn't look right in the first CG translation. We probably could have debated and continued to finance these designs for months. It’s like a sculpture, you never feel it's finished.” “But when we added the voices of the original babies for the next layer, I think it brought them to life,” Boutilier adds. “We needed no more convincing that this show would capture the spirit of the original.” She also says the new CG look inspired them as writers when it came to creating a fresh script, whether the babies are running around in their own backyard, exploring caves like Indiana Jones, having a Jurassic jungle experience or riding in mining cars.

“Between the lighting, the design, the texture, the tactile, we're out in a new setting that just inspires so many more stories,” Boutilier says. “You know how the babies in the original are always pulling waffles or gummy worms out of their diapers? To see them do those gags in CG, it is more impactful. Those kind of character moments can be even stronger.”

For Casemiro, even the gags have a more artfully comedic charm. “The original show was really forced perspective, with the baby's point of view down on the ground towards the carpet, and CG instantly gives you that tool, so you can move the camera where you need,” he says. “CG also gives you a great depth of field. There's a scene in the pilot where Didi is being a little condescending about how Grandpa Lou needs to be more responsible with the kids and meanwhile, in the back, you see Phil and Lil raiding the refrigerator. It's such a funny moment of this happening under Didi’s nose. In 2D, you couldn’t play that same way.”

The added realism of the show’s CG also allows for more comedy exploration with subtle facial expression and body movements, like Chuckie’s thoughtful confusion as Angelica persuades him to steal cookies from the pantry. For the first time, viewers can see the thought process on Chuckie’s face as he works through the problem, finds a glitch in his vocabulary, and finally asks, “What’s a pantry?”

But Boutilier says these “facial articulations” with CG also have informed more emotional moments with the characters as well. “There’s a scene where Chuckie is worrying about something and you'll see Susie just sort of touch his hand and her compassion feels so real,” she shares. “We didn’t have time to do that with 2D. Before, we might have relied on voice acting to get those emotions across. And we still have great voice acting, but now we have the combination. CG allows us to get closer to watch these babies pondering big issues and have these deep friendships and deep thoughts.” Amidst all the changes, The CG Rugrats is still chalk full of Easter eggs paying homage to the original series, and Boutilier and Casemiro hope this mix of old and new re-captures the hearts of long-time fans and stirs a familiar excitement for children of those original fans. “It's more than just a favorite show,” explains Boutilier. “We both felt it over the years from people who experienced the show. There’s something very deep about their love for Rugrats and we want that sort of magic to be reproduced in this form.”

“What would be such a success is to see the same joy from the new young audience that we once saw from the previous audience,” Casemiro adds. “There was such love and affection for these characters as if they were real friends. And, ideally, if kids come away understanding the power of friendship and how important friends are, and love this show as a representation of that, then that would be a super win for us.”

Choc Chip Animation Riffs on Pop Culture in ‘The Art of Murder’
F is for Flake: The (Not So) Great Animation Robbery?
Re-VIEW: ‘Avatar: The Way of Water’ – A Miraculous Vision
‘Kung Fu Panda: The Dragon Knight’ Celebrates a Special Lunar New Year
END_OF_DOCUMENT_TOKEN_TO_BE_REPLACED