On the Road to the 93rd Oscars: The Animated Feature Film Nominees

‘Onward,’ ‘Over the Moon,’ ‘A Shaun the Sheep Movie: Farmageddon,’ ‘Soul,’ and ‘Wolfwalkers’ vie for this year’s Best Animated Feature Oscar. 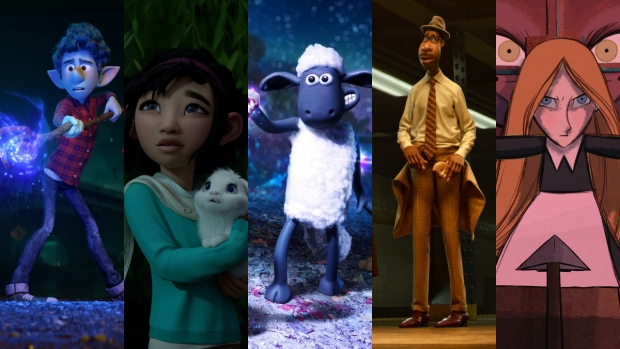 Amidst a relentless, ongoing pandemic, the world of animation has thankfully continued to shine. Throughout 2020, as most all live-action productions were either canceled or postponed, animation teams quickly found their adjusted stride through the trials and tribulations of remote filmmaking. Though cinemas remained mostly off-limits, streamers and VOD outlets picked up the slack; platforms like Netflix and Disney+ helped showcase the annual crop of 2D and 3DCG feature films to keep audiences animated through very rough times.

From 17th-century Irish fairy tales and cosmic Chinese legends to musical and magical tales about family, destiny, and what makes us “us,” five heartwarming films have been nominated for Best Animated Feature at the 93rd Academy Awards. Pixar’s Onward and Soul, Netflix’s Over the Moon and A Shaun the Sheep Movie: Farmageddon, and Apple/GKIDS’ Wolfwalkers all offered film fanatics relief, escape, and wonder in a time of isolation, distress, and prolonged uncertainty.

Below, you’ll find our breakdown of this year’s slate of animated feature film Oscar nominations, including links to AWN story coverage. Congratulations to all the nominees and be sure to watch the ceremony, taking place in person, and streaming live, Sunday, April 25.

While in “days of old” the world was filled with magic, times change. While New Mushroomton is still inhabited by mythical creatures, technological advances and industrial innovations have made magic relatively obsolete. Onward begins with two very different elf brothers, Ian and Barley Lightfoot; younger brother Ian is a smart but highly underconfident high-school student, while older brother Barley is an enthusiastic and impulsive role-playing gamer with an affinity for his town’s history and old magic.

On Ian’s 16th birthday, his mom Laurel gives him and Barley a magical wizard’s staff that belonged to their late father; it comes with a spell that might bring the brother’s dad back to life for one full day. But, when the spell goes wrong, the brothers only manage to bring back half their dad: the lower half. Buckling themselves into Barley’s less-than-trusty van steed “Guenevier,” the two brothers and half-dad set out to correct the spell so Ian can meet his father for the first time.

“The story is inspired by my own relationship with my brother and our connection with our dad, who passed away when I was about a year old,” says Scanlon. “That was the jumping-off point. We’ve all lost someone, and if we could spend one more day with them—what an exciting opportunity that would be. What would you ask, what would you want to learn, and what would you want them to learn about you? We even talked for a while about maybe the brother character's a scientist and they build a machine that brings dad back. But we went to magic pretty quickly because it just seemed more romantic, more emotional.” This space-travel adventure begins in China’s Wuzen Water Town, where a young girl named Fei Fei grapples with the death of her mother while helping out in the family’s moon cake shop, working hard to hide her disdain of her father’s plans to remarry. Finding escape in the stories her mother told her as a child, Fei Fei is not deterred by family teasing of her long-held belief in the Moon Goddess, who waits on the moon to be reunited with her lost love.

Desperate to escape a reality she has no interest in recognizing, Fei Fei builds a rocket ship and journeys to the moon, with her stowaway soon-to-be stepbrother Chin in tow, hoping to find the Moon Goddess, Chang'e, to not only prove her family wrong, but to restore her father’s faith in love and Fei Fei’s mother.

Directed by Glen Keane, Oscar-winning director of Dear Basketball and legendary Disney animator best known for The Little Mermaid, Beauty and the Beast, and Tangled, Over the Moon was produced at Shanghai-based Pearl Studio by Peilin Chou and Gennie Rim, and animated at Sony Pictures Imageworks, the powerhouse VFX and animation studio behind films like Spider-Man: Into the Spider-Verse, and Cloudy With a Chance of Meatballs. Over the Moon’s story originated in the mind of Joy Luck Club’s Janet Yang, who passed the idea on to Audrey Wells, noted writer of Under the Tuscan Sun and Shall We Dance. Sadly, Audrey herself passed away from cancer in 2018; the film has been dedicated to her memory. Netflix released the film worldwide outside of China.

“I got to tell you, I've never worked on a film that I'm more proud of, that's more beautiful, or more subtle in the animation performances,” says Keane. “The songs, they're wonderful, emotional, fun, joyful. There are so many wonderful things about this film, and I'm putting it out there trusting that people are going to see it the way I see it. I had a friend a few years back say, ‘Glen, do you think you love people through your animation?’ I said, ‘No, I don't think so because I get obsessed with my animation and I have to push it away to spend time with my family, who I do love. So, it's more of a competition.’ He said, ‘You know, you should really rethink that. Because, it's in your animation that you've touched people, and it's a way for you to love them.’ And if there was ever film that was true about, this is the film.” A Shaun the Sheep Movie: Farmageddon

The film follows Shaun and his Mossy Bottom Farm friends as they attempt to help a cute and powerful purple extra-terrestrial, Lu-La, track down her missing spaceship so she can safely return to her home planet. The sci-fi romp is complete with plenty of gags, chases, and a dastardly villain, Agent Red, and her hazmat-suited henchmen.

It was quite a challenging feat for first-time directors Richard Phelan, known for his animation on Early Man, and Paranorman’s Will Becher. “From the very beginning, when we decided to do a sci-fi film, we knew it would be expansive,” Phelan says. “We’re going into outer space and visiting other planets. We had big ambitions. It was our first film as directors, and though we know the world of Shaun the Sheep very well, we definitely wanted this one to feel different, and to build on what the first film had done.”

“We set some massive goals both in design and complexity,” Becher adds, “But everyone in the crew just completely rose to the challenge, which was great. Early on, we just told everyone, ‘Don't let anything inhibit you. Just keep pushing it, and we'll try to problem solve our way out of it afterwards.’ The story crew and screenwriters just went for it; our producer, Paul Kewley, would say, ‘Okay, this is too big. What is this scene really about? How can we sort of bring it down a little bit, but keep that ambition throughout?’ Somehow, we always figured it out.”

Joe Gardner is a pianist and part-time middle school music teacher by day and a full-time dreamer and aspiring jazz musician by night. While his mother insists that he make his teaching a full-time career, Joe refuses to give up on his dream, believing that his life will be meaningless unless he makes it to the big time. When Joe is offered the chance to perform with famous jazz artist Dorothea Williams, he’s ecstatic. So ecstatic, that he walks by a construction project, without paying attention, and falls down a manhole.

Unwilling to accept he’s left his Earthly life, Joe’s frustrated soul refuses to head toward the bright light of the afterlife; he somehow escapes into "Great Before," where he accidentally becomes a mentor to an unborn, troubled soul named “22.” As Joe prepares 22 for a life on Earth, he becomes even more tunnel-visioned in his effort to sneak back to the land of the living.

Directed by legendary two-time Oscar-winner Pete Docter and newcomer-to-animation Kemp Powers, with Dana Murray producing, Soul deals with complex issues that touch on religion, culture, and race. Soul is also Pixar’s first film with a Black lead. While Soul’s Golden Globe and Annie Award-winning journey, focused on the essence of humanity, began long before the start of 2020s societal upheavals, the film brings Pixar Animation Studios’ unique brand of distinctive design, incandescent animation, and familiarly playful humor to audiences at a most opportune, and important time.

“Well, in some ways, just because of the climate we're in, what's happened to the world, you'd be stupid not to acknowledge that this film is risky,” Docter shares. “There's just a lot of unknowns. It used to be you could look at market trends and kind of say, ‘Well, these films did this, and so therefore we're predicting that.’ But the future is a little bit less certain right now in a lot of ways. That's obviously nothing we have control of. But in terms of what we can control, I still believe that people want to see themselves up on the screen. They want to be acknowledged, that their own struggles in life are shared with other people, that they're not alone out there, which is an easy thing to feel, especially now.  There are days where you just don't see anybody else, and you feel like, ‘Am I the only one out here?  Am I the only one going through this?’” Determined to help fight wolves, bears, and even dragons, young apprentice hunter, Robyne, journeys to Kilkenny, Ireland with her father to wipe out the last remaining wolf pack. While exploring the forbidden lands outside the city walls, Robyn encounters a wild, free-spirited girl named Mebh, who has the power to talk with wolves and, while she sleeps at night, becomes a wolf herself through some mysterious magic. As the two girls become even closer friends, while searching for Mebh’s missing mother, Robyn finds she too can turn into a wolf at night; her destiny is now set for the inevitable clash with her father’s mission.

Wolfwalkers is the latest 2D animation masterpiece from Ireland’s Cartoon Saloon, the studio behind Oscar-nominated films like The Secret of Kells, Song of the Sea, and The Breadwinner. Directed by Tomm Moore and Ross Stewart, co-produced by Cartoon Saloon and Mélusine Productions for Apple/GKIDS, and produced by Moore, Paul Young, Stéphan Roelants, and Oscar-nominated The Breadwinner director Nora Tuomey, Wolfwalkers is a stunning example of art-in-motion, with animation that, like a wild animal, never stops moving or enchanting viewers.

“2D is closer to the language of dreams,” says Moore. “It's closer to the language of symbols. You can see cave paintings from 30,000 years ago, and they are magical because they're stylized and represent a way of communicating that's evolved over the whole history of painting; drawing comics, illustration, these are things that only work as drawings that you can use in hand-drawn animation. For Wolfwalkers, we had animators who'd worked on Klaus; we were kind of going in the opposite direction, as Klaus is super polished, and beautiful, and we wanted to really make a virtue of the fact that Wolfwalkers was drawn. So, we let the lines be alive and show the inner workings of the characters.”