On the Road to the 92nd Oscars: The Animated Feature Film Nominees

Heading into this coming Oscar Sunday on February 9th, catchup on AWN’s coverage of the films and creative teams nominated for this year’s Best Animated Feature Film. 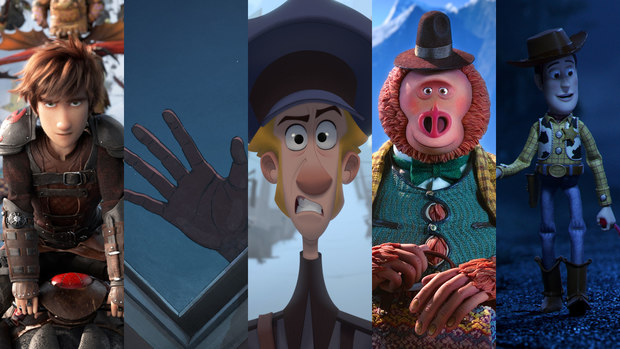 The campaigns are over, the ballots cast and all that remains for animation fans is to wait until Sunday evening to find out which film will take home the Best Animated Feature Oscar at the 92nd annual Academy Awards.

2019 was a particularly strong year for animation, both creatively and commercially. Two independently produced 2D animated features — I Lost My Body and Klaus — broke through to earn noms as Netflix makes its growing animation presence felt at the Oscars for the first time. LAIKA continues its impressive streak, with Missing Link the fifth of the Portland, Oregon-based studio’s five features to earn a nomination in this category. And the major studios demonstrate their staying power with noms for powerhouse sequels in Toy Story 4 and How to Train Your Dragon: The Hidden World that were as successful with critics as audiences.

Here’s a final look at the five animated features vying this Sunday for Oscar gold. How to Train Your Dragon: The Hidden World
Written and directed by Dean DeBlois; produced by Bonnie Arnold and Brad Lewis

Picking up a year after the previous installment, The Hidden World’s story challenges its characters to mature in ways rarely seen in live-action or animated adventure series. The result is a heart-tugging, fitting finale that delivers a satisfying conclusion to a decade of innovative work put into the series.

Inspired by his childhood love of the classic Star Wars trilogy, DeBlois saw the potential for the Dragon world to grow with its audience in a similar way.

”In the time that it takes to make an animated movie, our fan base could be aging with the characters, which wasn't really something that I'd seen done before – where you take a cast of friends and then grow up with them,” he says. “We would leap five years into the future and find a new organic problem that felt important and universal.”

The series has been a technical innovator too, from bringing in legendary cinematographer Roger Deakins to consult on lighting the first picture to the implementation of DreamWorks’ new renderer Moonray to make possible the visuals of The Hidden World.

“I’m very proud that we were able to reach the goal that we had set for ourselves, that we didn't have to creatively compromise much, and that we did it with largely the same team over the course of a decade,” DeBlois adds.

Dean DeBlois Talks the Care and Feeding of Flying Reptiles

WATCH: New VFX Breakdown Reel from ‘How to Train Your Dragon: The Hidden World’

How MoonRay Became the Hidden Superpower Behind ‘How To Train Your Dragon: The Hidden World’

Where Have All the Dragons Gone? Dean DeBlois Concludes His Spectacular Trilogy with ‘The Hidden World’

I Lost My Body
Written and directed by Jérémy Clapin; produced by Marc du Pontavice

Animation’s ability to tell stories not possible in other mediums is most clearly on display in  I Lost My Body, an unusual 2D-animated tale of a severed hand trying to reunite with its body interwoven with a complicated romance between a pizza delivery boy, whose parents were killed when he was a small child, and a skeptical librarian.

The France-made feature made a splash in its Cannes Film Festival debut and was scooped up by Netflix, whose global streaming platform has helped the film find a wide and appreciative audience.

Based on the novel Happy Hand by the Oscar-nominated screenwriter of the 2001 feature Amélie, producer Marc du Pontavice says he optioned it because he saw it as a “cinematic challenge that only animation could solve. It was as if the very word ‘animating’ (giving a soul) could come true in this endeavor.”

Pontavice, founder of France’s Xilam production company, recruited shorts filmmaker Jérémy Clapin to direct, promising him creative freedom to produce something raw and realistic. “My goal was to create an animated world half-way between the tangible and the imaginary,” he says. “So, I used a mixture of 2D and 3D.”

The result has earned rave reviews that, along with honors from top festivals like Annecy and a strong showing at the Annies, suggest a solid chance of taking home the Oscar trophy.

“Who would have thought that an adult animated film, a bit weird and melancholic, about a severed hand and titled I Lost My Body could one day be Oscar nominated?” Clapin said of the film’s nomination.  “It’s proof that a film made with limited funds and not playing by the usual rules can still achieve the highest artistic recognition.”

GALLERY: 31 New Images from Oscar-Nominated ‘I Lost My Body’

‘I Lost My Body’ Pushes the Creative Boundaries of Feature Animation

‘I Lost My Body’ Takes Animation Is Film Top Prize While animated Christmas stories are as ubiquitous as the holiday itself, there’s a lot of cutting-edge innovation behind Klaus, which tells the tale of how a hapless mailman named Jesper Johannson helped a reclusive woodsman find renewed purpose and joy in bringing toys to children as Santa Claus.

The brainchild of Sergio Pablos, who left a storied three-decade studio career to found an animation studio in his native Madrid, Klaus had a long path to the screen that saw it rejected by every studio until landing at Netflix in 2017. The perceived risk was Pablos’ plan to make the film in 2D, though he was determined to give it a fresh, crisper, updated feel using modern technology to add volume and texture to the look of traditional cels.

“With Klaus, we knew it couldn’t just be a great looking film,” Pablos explains. “It had to have a great story. And I had to be up to the challenge.”

Reactions suggest success for the movie, which became Netflix’s first original animated feature and was viewed by nearly 30 million viewers within the first month of its release.

And while Pablos wears on his sleeve his love of 2D animation, it’s the story that he thinks viewers and critics have responded to. According to the director, “Let's be clear: we don't want anybody to support the film just because it's 2D. That would be hypocritical to all the people who say, Toy Story's great because of the story, not the technique,’ and then completely switch the argument and say, ’Oh, support Klaus because it's 2D.’ That wouldn’t be right. If it's a good film, support it, regardless of medium. How we made it should be a secondary consideration, not the primary one.”

Who Says 2D Animated Features Are Dead? Certainly Not Netflix!

No film has been more surprisingly resilient this awards season than LAIKA’s Missing Link. The Portland, Oregon-based studio’s fifth stop-motion picture — its first distributed by Annapurna Pictures — debuted last spring to strong reviews and weak box office. But as Hollywood’s thoughts this Autumn turned to awards-season gold, Missing Link made a strong showing of it. Screenings and exhibitions of the sets and puppets used to make the feature put the movie front and center for awards season, and it’s paid off with not just an Oscar nomination but also two key VES Awards and a high-profile win from the Golden Globes.

Missing Link tells the tale of intrepid 19th century British adventurer Sir Lionel Frost, whose search for Sasquatch transforms into a mission to return the lost creature to his ancestral home with the Yeti in the Himalayas. A colorful, exhilarating global romp inspired by director Chris Butler’s love of adventure epics like Raiders of the Lost Ark, Missing Link is LAIKA’s most complex feature with more than 110 sets, 65 unique locations, 106,000 3D-printed facial replacement parts, 531 CG assets, 182 CG characters, and 47 motion-control camera rigs used in creation of 1,486 shots.

“It’s pretty obvious the biggest challenge on this film is the scope and scale,” Butler reveals. “It’s a big movie, although I think for me, there were challenges that maybe people won’t immediately see.”

Among those challenges was the design, build and animation of Mr. Link himself. Voiced by Zack Galifianakis, the character was portrayed with the heaviest puppet the studio had ever made and played the central role in the movie.

“It took over a year to refine that puppet, to get it working properly,” says Butler. “I’m still staggered that we actually did it. There were things our team did with Link’s neck, to allow it to move around and have the hair move properly on top of other hair, that was like on the level of NASA science. It blows my mind.”

Set Visit: Go Behind the Scenes of LAIKA’s ‘Missing Link’

Review: LAIKA Delivers its Most Complex Film Yet with ‘Missing Link’

Toy Story 4 is the easy choice for this year’s Best Animated Feature Oscar, and it’s a choice that’s pretty hard to argue with. Despite being the fourth film in Pixar’s flagship series, Toy Story 4 is a powerhouse film that has resonated with audiences and critics who would have had no problem calling out the movie if it failed to live up to the quality of its predecessors.

And it’s a feeling echoed in the halls of Pixar, where director Josh Cooley and his team began work on the film by asking if it was even necessary to make a fourth entry in the franchise.

“We had to come up with something that was worthy, that had the same emotion, adventure and humor that could stand right up there with the first three films,” he reveals. “That was the thing up on the wall — this needs to earn the title of Toy Story 4. That's what we were aiming for.”

The story diverges from the previous films in significant ways, as Woody is tempted to leave his role as Bonnie’s toy to live a life for himself with Bo Peep, who already has established an independent life of her own. The existential premise leads the lonesome cowboy on a rescue mission in an antiques mall created with a level of detail and personality that no real location could possibly deliver.

“It's all about Woody,” says producer Jonas Rivera. “Every single Toy Story film has been that way. So, this film should be no different. We realized that the first three films were about his time with Andy and that story came to a conclusion. But, we found there's more of Woody's story to tell. The Woody storyline became the most important thing. We had to make sure that everybody else supported his story as well.”

That created openings for new characters, as distinct and interesting as any in the series, to enter the narrative and round it out: Scheming baby doll Gabby Gabby, confused craft toy Forky, and all-Canadian stunt rider Duke Caboom.

The results speak for themselves, making it very possible that the 92nd annual Academy Awards will add yet another statue to the stuffed trophy case in Pixar’s Emeryville studio.

Pixar Returns to its Greatest Franchise Success with ‘Toy Story 4’