Review: ‘Weathering with You’ - Finding That Place Where You Belong

Makoto Shinkai’s latest is an aesthetically pleasing animated tapestry with characters and relationships that are funny, dramatic and real. 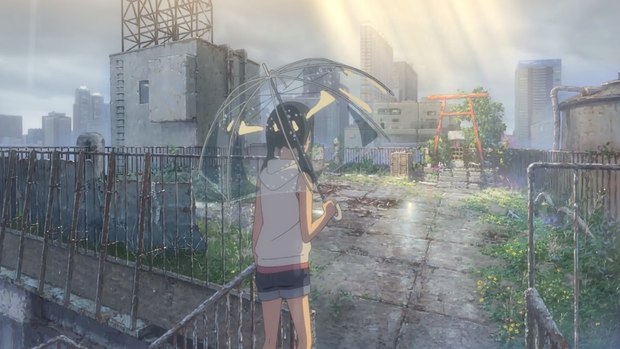 Mention Makoto Shinkai and I’ll watch it. You don’t even have to tell me about the plot or the characters. It doesn’t matter because I know I’m going to feel my eyes as I watch another animated tapestry unfold on screen. For me, it started with 5 Centimeters Per Second, and I’ve yet to be disappointed by Shinkai’s work.

So, what is the story this time? High schooler Hodaka Morishima runs away to Tokyo and by sheer happenstance meets Kesuke Suga, who runs a small publishing company that investigates urban legends and paranormal activity. One strange event is of particular interest to Suga’s publication: the unusual weather as of late. Now working for Suga, Hodaka’s investigation leads to a legend of a supernatural being who can control the weather. Then, of course, Hodaka befriends Hina, who eventually reveals that she is this supernatural being.

Two young teenagers meet, connect, and set out on an exciting path. But they also hit that eventual and expected bump on the road. It’s an old story. We know it well. But in the hands of a good storyteller -- in this case a very visual one -- it can be watched with pleasure over and over again. And so the trajectory of the story is slightly predictable, but not too obvious. The characters and their relationships are funny, dramatic, and real, if not lovable in their heartwarming, wholesome, and painful interactions. As to be expected from Shinkai, emotions are portrayed wonderfully. And although you may or may not like the ending, which does fit nicely, this film is just easy to watch.

Thinking about Shinkai’s work, the overall tone of Weathering with You is very close to his recent success, Your Name. But while it lacks the raw emotion and just wonderfully depressing tone of 5 Centimeters Per Second – or even Garden of Words, for that matter – it does share that films maturity and sense of reality. On Hodaka’s arrival in Tokyo, he does attempt to make it on his own before seeking Suga out for employment. Sleeping on the streets, showering when possible, eating what’s available, the reality of violence and exploitation…the struggle is made viscerally clear. But in turning to Suga, Natsumi, and eventually Hina and her younger brother, Shinkai visually captures the feeling of belonging, the feeling of creating a family from a small group of characters to whom you bare no actual biological relations. You’re home.

Weathering with You is a phenomenal movie. For those not indoctrinated to Shinkai’s art, the animation alone will blow your mind. His aesthetic is just so pleasing. As always, Shinkai’s work seems to be just a little bit more about art than story…and that’s a good thing! Weathering with You is in theaters now and worth that money in your pocket.

Taking an Old-School VFX Approach in ‘All Quiet on the Western Front’
‘Natural Habitat Shorts’: Like ‘Ranger Rick,’ But for Adults
Framestore Sets Sail on ‘1899’ with New Virtual Production Tools
Animated Characters: The Art of Babbitt – Part 1
Bruce Smith and Ralph Farquhar Talk ‘The Proud Family: Louder and Prouder’ Season 2
VFX is the ‘Thing’ for Tom Turnbull on Tim Burton’s ‘Wednesday’
We Need to Chat
F is for Flake: The (Not So) Great Animation Robbery?
END_OF_DOCUMENT_TOKEN_TO_BE_REPLACED