Masaaki Yuasa translates Tomihiko Morimi’s novel into an erratic and fluid feast for the eyes. 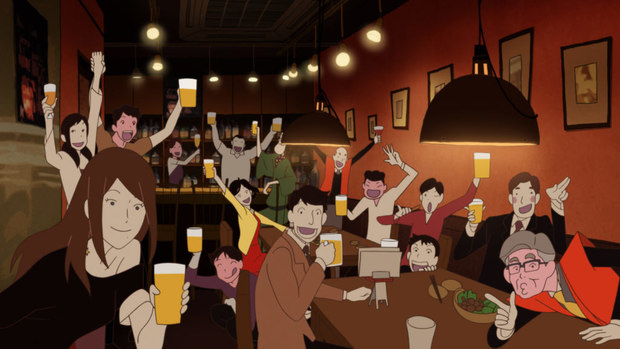 For me, The Tatami Galaxy was love at first sight. Based on the novel by Tomihiko Morimi, this eclectic 11 episode series directed by Masaaki Yuasa about an anonymous third year student at the University of Kyoto, his attraction to a younger engineering student, his love doll Kaori, and the crazy and eccentric cast of supporting characters was simply another kind of anime. It’s the kind of series you binge watch.

When I agreed to take a look at Night is Short, Walk on Girl, while I knew it was also directed by Yuasa, I hadn’t done any prior investigation. Needless to say, I was pleasantly surprised – let alone excited – when I recognized not only the anime aesthetic of The Tatami Galaxy, but some of the same characters as well! Based on another novel by Tomihiko Morimi, once again Yuasa visually translates the author’s prose into an erratic and fluid feast for the eyes.

What’s the plot? Much like The Tatami Galaxy, there really isn’t one. Morimi’s work and Yuasa’s vision captures the quotidian instability of student life, but simultaneously infused with an otherworldly imagination. This is just another view into that seemingly fated connection between the anonymous student, Senior, and the Girl with the Black Hair. In short, a night of drinking transforms into a surreal bar crawl in which Senior and the Dark Haired Girl will connect, but not until after encountering a drinking club of older men, strange invented dances, the library police, a man who refuses to change his underwear till he meets a certain girl again, an old man of supernatural stature, a guerrilla theater troupe, an erotic art club made up of perverts, drinking contests, eating contests, and an illness which takes over Kyoto. All in one night!

This is a ride, and you’re not in the driver’s seat. So sit back and enjoy. Now, the artwork. It’s all about the aesthetic. At first sight some might not even consider this anime, especially because of the unbridled use of color and the human figures elongated and elastic in their drinking, eating, and moving. But it is anime! It’s refreshing in that it abandons the repetitive cookie cutter style of so much anime where everybody looks the same. As for storytelling, the progression from beginning to end is more reminiscent of reading William S. Burroughs and his cut-up style.

The Tatami Galaxy already got me a long time ago, so of course I thoroughly enjoyed this flick. Put simply, anime based on Japanese literature is good. While manga can be predictable, because audiences – especially now – can be very predictable, Night is Short, Walk on Girl is a reminder of what anime can also be.