Cartoon Network’s ‘Adventure Time - The Complete Fifth Season’ offers a window looking back onto the 1,000-year history of the Land of Ooo and expanding our understanding of Ice King, Princess Bubblegum, Marceline and other members of the AT multiverse. 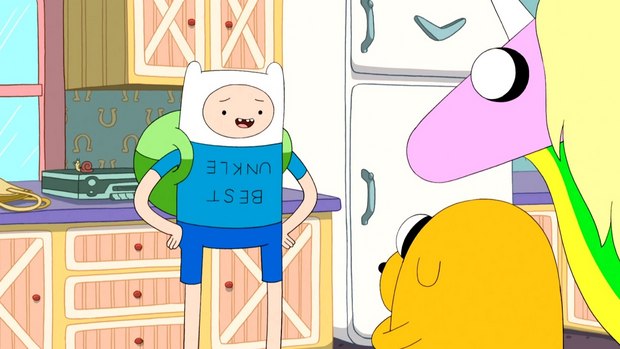 Created by Pendleton Ward, Adventure Time chronicles the heroic, kind, silly, obnoxious, playful, sweet and gentle activities of central characters Finn the Human and his adoptive brother and companion, Jake the Dog, in the post-apocalyptic Land of Ooo. I can say unhesitatingly that Season 5 of Adventure Time is the best season yet. Until, that is, I pause to consider Season 6, which just finished airing on Cartoon Network. (As of this point in time the series is set to run on CN through Season 8.) That's just how it is with the Emmy-winning series: it started off great and it gets consistently better with each season.

Having the entire collection of season five on Blue Ray or DVD is a special treat; the content looks stunning. If you’re a fan who is used to watching this show via broadcast television you owe it to yourself and your close Adventure Time fanatics to watch it in solid, brilliant and beautiful high-def. It will leave you speechless.

Speaking of stunning, also consider that Season 5 offers no less than 52 episodes of Finn and Jake greatness! Even more important, however, is the fact that Season 5 offers deep stories and windows into the layers upon layers of stories...looking back into the 1,000 years of milestones resulting in contemporary Ooo. The information provided by these stories deepens and expands our views of Ice King, Princess Bubblegum and Marceline, as well as Finn and many other citizens of the Adventure Time multiverse. Many episodes refer back to information in previous seasons, strengthening the sense of continuity and completeness that Season 5 provides.

The only downside to this set is the seemingly lacking commentary... The Adventure Time featurette is mostly fluff and does not offer any insights or context into the workings of the season. The animatic clips are nice enough but not particularly satisfying either.

Every Adventure Time fan has their favorite episodes but here are a few to we consider noteworthy: These are just a few standouts in an amazing collection of 52 great episodes of the complete Season Five collection of Adventure Time. Enjoy!

A Grandma and Granddaughter Bond Over a Love of Wrestling in ‘Nona’
Prime Video’s ‘Do, Re & Mi’ Hits All the Right Notes
Brad Neely Channels his Arkansas Childhood in ‘The Harper House’
Playing a Deadly Board Game of War in Iron Maiden’s ‘Stratego’ Music Video
Patrick Osborne Takes Billie Eilish on a Dreamy Iconic LA Tour
Cantina Creative Helps Turn the Hands of Time in ‘Loki’
Paul Lasaine Talks the Not So 3D World of ‘What If…?’
‘Twenty Something’ Plumbs Adulthood Insecurities… in a Good Way
END_OF_DOCUMENT_TOKEN_TO_BE_REPLACED