The Return of ‘Lost in Oz’: Q&A with the Creators

The Emmy Award-winning animated series returns with a new short, featuring its most beloved characters, that answers lingering questions about the newest Dorothy Gale: will she return to Kansas, or stay in Oz with her new magical friends? 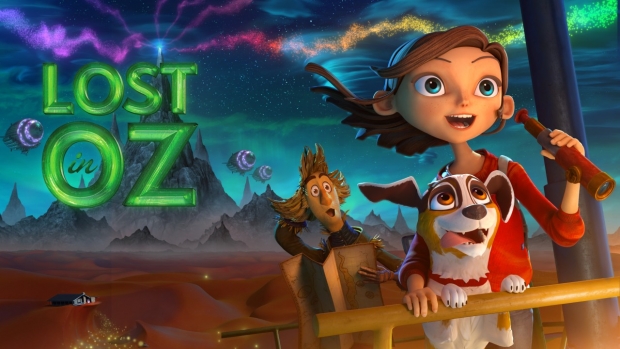 The Emmy Award-winning animated series Lost in Oz is back after leaving fans on a precipice of a cliffhanger: will the newest Dorothy Gale return to her conventional home in Kansas, or will she stay in Oz with her newfound magical friends?

The exciting new short Packing Magic brings us from one cliffhanger to the next, addressing the lingering question and raising even more.

The latest chapter of Lost in Oz brings back the series' most beloved characters, including the not-so-wicked witch West, Reigh the conspiracy realist lion, and of course, Toto, the loyal four-legged sidekick. In addition to familiar faces, a mysterious new baddie comes to town – and he's determined to shake things up for Dorothy and her friends.

Why Oz, and why now?

In a recent Q&A, Executive Producers Jared Mark and Mark Warshaw discussed why this particular franchise was so close to their hearts and what inspired them to hold a fresh lens to the classic tale.

“We’re big fans of telling stories over multiple media platforms, and L. Frank Baum was one of the original transmedia storytellers,” explains Warshaw. “He wrote books, had stage plays, and started one of the first movie studios in Hollywood to tell more Oz tales.

“This was really that classic definition of luck: preparation running into opportunity,” he continues. “We'd been researching the original Oz books for a while when our former employee, Monica Dennis, called and said they were looking for a new take on Oz at Amazon Studios. So, we locked the doors and put away the cell phones and developed our pitch for Lost in Oz.” “Oz has become so engrained in our culture,” said Mark. “People know and respond well to its story, and it’s an honor to make this new entry point for a generation who might not be as familiar with that story. If this show can get those kids to pick up the Oz books and dive in, what a joy that would be.”

"This is a modern continuation of the original Oz stories," said Warshaw. "Our Dorothy Gale is the great-granddaughter of the original Dorothy Gale. Our character West is the great-granddaughter of the Wicked Witch of the West. We've taken the original books and fast-forwarded to an evolved Emerald City. We really wanted to show what Emerald City would look like in today's world. Because of a combination of people migrating to Oz and the world naturally growing, we have a huge, reimagined world of Oz." "We intended this show to be something the family could all sit down and watch together," said Mark. “We didn't want to make a babysitter, and we certainly didn't want to make a parent punisher, either. We wanted something much like the best TV we experienced when we were growing up. We wanted to create a show that families could dig into together and maybe even binge together. Believe it or not, we were inspired by the serialized shows that were on at the time, including Breaking Bad and Game of Thrones. We wanted every episode to make the world so much bigger."

The Team Behind the Magic

"Bluescape has been an incredible tool in the pre-production process," said Warshaw. "We used our Bluescape workspace to launch our storyboard artist, the fantastic Mina Martinez. We were able to use Bluescape to concept new designs, show reference materials, and manage the board review process, as well.

“It felt like we were all in the same room during the entire storyboard process,” he adds. “We're moving through virtual meetings at a much more efficient pace. Having the Bluescape workspace allowed for a more natural flow of creativity.”

The new short film is just the beginning of the next thrilling chapters of the Lost in Oz story. Producers and IP owners at the Bureau of Magic teamed up with Bang Zoom! Studios and Polygon Pictures Inc. to keep the adventure going.

Want to learn more about the making of Lost in Oz? Check out the full discussion here. You can also learn more about how Bluescape helped unite an international team to bring Dorothy and the gang to life here.