London-based Juppi Juppsen and Mathias Lemaitre Sgard’s new animated short pays vibrant homage to classic sci-fi and disco with a story about a space superhero, his female droid, and their search for an ancient artifact holding the essence of music. 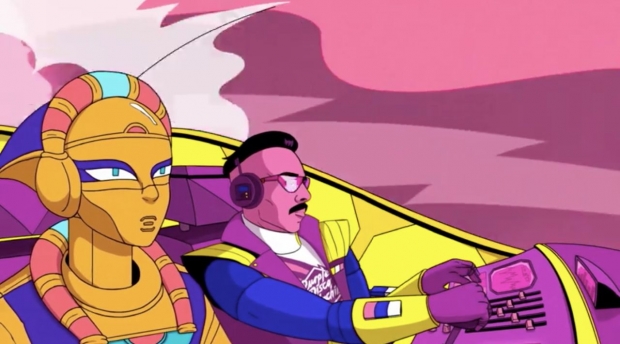 London-based designers Juppi Juppsen and Mathias Lemaitre Sgard have shared with AWN their new animated music video for Purple Disco Machine’s just released single, Playbox. With just shy of 900 million streams across his catalogue to date, and over 9 million monthly listeners on Spotify, the German disco megastar continues to live up to the hype of #2 Beatport Artist of All Time.

Illustrated and animated by the two artists, Playbox pays vibrant homage to classic science-fiction, cyberpunk, and retro-futurism, all spiced up with disco influences. In the video, Tino (Purple Disco Machine), a space superhero, and his female droid search for an ancient artefact said to hold the essence of music and, therefore, possess unimaginable power.

Take a few minutes to get your retro groove in gear while you watch Playbox:

The pair was originally asked to pitch on a different Purple Disco Machine project that ended up being made in live-action. “But they loved our pitch and suggested we could work together on the next music video,” Juppsen and Sgard explain. “So, we put together a first concept for the piece, with the core story idea kind of staying the same. We just refined the main characters, scenario, details and tweaked a few things going forward. The main inspirations came from classic science fiction films and comics, some 70s / 80s disco and funk influences, as well as some psychedelic / trippy visuals. As we’ve worked together before, we quickly came up with a good way to merge styles, creating a colourful world of characters and planets, though each of us was still able to add our own signature elements.”

From first concept to final delivery, the production took six months. Compositing and some animation were done in After Effects; Juppsen uses Illustrator and After Effects, while Sgard uses Photoshop, Animate, and TV Paint.

“We worked together from the very beginning, which helped build a common vision,” the designers note. “We spent the first half of production on concept, character designs, story, and animatics. The second half was spent on layouts, animation, and compositing. We split tasks according to each of our preferences and strengths in terms of animation. The overall look evolved as a natural merging of our own styles and project influences.” With the pair handling every aspect of production, the biggest challenge was simply staying on schedule. “With us doing everything in just six months, with only three available for layouts, animation, and compositing, we definitely had to stick to a tight schedule,” Juppsen and Sgard say. “Another challenge was finding a good way to integrate our different working styles and choice of tools into a general workflow,” they add. “We’d worked together on projects before and had some experience with this combination of tools, but never on a project this size.”

Coming from completely different animation backgrounds – while Juppsen is mostly self-taught, Sgard is classically trained in 2D animation – proved challenging as well, especially in the beginning. “We eventually arrived at not necessarily a professional / industry-standard production process, but a very creative and intuitive one that worked perfectly for us, helping us manage some of the more difficult parts of the project.” “The best part about this was getting to work on a fun project with a good friend,” they both shared. “We mostly worked remotely and had daily chats, but also met up once a week to edit everything we had and do a render, which was super nice, just like us hanging outside of work. Working as a duo, from bouncing ideas back and forth, to writing the story, storyboarding, animating, and editing the whole music video, was a cool and fun experience.”

“Communication with the client was also really good,” they conclude. “Everything went smoothly, and we had a lot of creative freedom. There were very few changes from their side as we all kind of shared the same vision for the video. The two of us can’t wait to collaborate on future projects, exploring different scenarios and finding new ways to combine our styles and techniques.”