Re-VIEW: ‘Turning Red’ - Embracing the Animal Spirit Within Us

Transformation lies at the heart of Pixar’s latest hit film, a coming-of-age story about a young Chinese girl in Toronto who must break away from all she has known to either accept, or reject, the actual beast inside her. 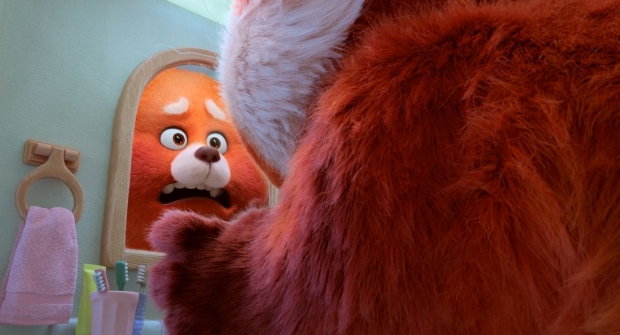 In Turning Red, the latest Disney and Pixar hit directed by Domee Shi and produced by Lindsey Collins, a young girl called Meilin ‘Mei’ Lee (Rosalie Chiang) falls prey to a family curse – or is it a blessing? – that turns her into a giant red panda at moments of high emotion. When her mother Ming (Sandra Oh) tries to get rid of the panda, Mei must decide whether to accept the beast inside her, or reject it in order to truly come of age.

With its chunky-cute styling inspired by anime and other Asian influences, Turning Red shows us a side of Pixar we have not seen before. The fluid camerawork penetrates a series of beautifully designed spaces, bringing a unique perspective to a diverse cast of complex and lovable characters. At the same time, like so many Pixar movies before it, Turning Red also has the courage to tackle bold themes.

The first of these is perfectionism. Mei’s mother is a control freak, but in reality her obsession with perfection hides a deep fragility. Like most perfectionists, the person Ming is most critical of is herself. As for Mei, she spends much of the film trying to find her own identity while at the same time mimicking elements of her mother’s behavior. “Some of her moves are also my moves,” she says. In a delicate way this shows how kids emulate their parents’ behavior.

At the film’s emotional climax, ​Ming finally acknowledges the hard truth by admitting her mistakes and apologizing to her daughter: “You want to make everyone happy but you are so hard on yourself. I am sorry if I taught you that.” She eventually finds words to express her deep love for her daughter and to let her go: “Don’t hold back for anyone. The farther you’ll go the prouder I’ll be.”

This message takes on special meaning in contemporary society. Obsessed with perfection, young people are constantly bombarded with idealized representations of themselves through media in general, and social media in particular. It takes courage to represent things the way they are and not as we would like them to be – even if that means embracing complexity and pain – and this something Pixar has always done so well: shining a light onto difficult questions in a very philosophical, yet accessible way. ​Ming is also profoundly aware of her role as a Chinese immigrant in Toronto. As part of her daily routine, she gives tours of the Chinese temple, opening up her culture to her neighbors and in turn to the global movie-going audience watching Turning Red on Disney+. In this way the filmmakers bring depth to the immigrant story by infusing it with rich layers of tradition, transforming the film into an open invitation for the world to open its eyes to Chinese culture, to analyze it, criticize it, and ultimately accept it.

However, the true power of Turning Red lies in its celebration of menstruation. By transforming this everyday reality into something divine, the story revisits the myth of Persephone, with Mei as the embodiment of the goddess. It challenges all those traditions by which women are excluded from temples and other sacred spaces because of their ‘impure bodies.’

Indeed, transformation lies at the heart of Turning Red – this is a coming-of-age story, an intensely female bildungsroman. Nowhere is the theme of transformation tackled more compassionately than in the sequences set in the bamboo forest, the sacred dimension where Mei confronts the circular portal through which she must pass if she wants to rid herself of her red panda alter-ego.

​The domain of the goddess Sun Yee, the bamboo forest is visually enchanting. Its soothing green beauty provides the perfect backdrop from which these tiny human characters contemplate the immensity of the cosmos. The truth it embodies is as old as the world – the knowledge that the time must come when you break away from all you have known to become your own person and accept yourself. To grow up. This is what Mei’s mother, with her stern, non-negotiable ideals, is urging her daughter to do by rejecting the panda that lives inside her.

If only it were so easy. Like Ovid, the poet of the metamorphoses, the fleeting world that connects humans, gods and beasts, Mei understands the power of ambiguity. She knows that discarding the panda means denying her innate power of creativity and all that is wild. The challenge for Mei – as for every human being who ever drew breath – is to achieve the transformation from child to adult without rejecting the good savage in her soul. As the setting for this rite of passage, the bamboo forest is therefore a space dedicated to the forces of nature and transformation. It reminds us that, with her devotion to all things ecological, Mei is the embodiment of Sun Yee in the modern world. ​The device through which transformation is achieved is the circular magic portal that exists amid the bamboo shoots. In Chinese culture – as in so many cultures around the world – the circle represents infinity. The use of a circle as a visual metaphor for coming-of-age reminded me powerfully of the circular dance at the end of Federico Fellini’s 8½, or the moment in The Catcher in the Rye when Holden Caulfield finally conquers his fear of getting old by joining his sister Phoebe on the carousel. The circle also symbolizes repetition and rebirth. Only when Mei finds Ming restored to youth in the bamboo forest does she finally understand her mother. In this heart-wrenching scene, she achieves the empathy that we then share as the movie-going audience.

The magic portal’s liquid surface gives it additional symbolic qualities. Water represents both life and femininity, and the portal’s mirror-like quality is a memorable example of the way the film plays with reflections. When Grandma (Wai Ching Ho) first arrives at the temple we see Mei reflected in her glasses. Mei constantly sees herself through the eyes of others, and she talks to herself in the mirror whenever she is engaged in some great internal debate. The idea of reflection comes full circle when Mei finally accepts herself for who she is – she literally learns to see herself and to accept her true self.

​During the red panda ritual, when all the women gather in a circle to invoke the power of Sun Yee, this geometric perfection unites ancient tradition with the modern world. The circle’s powerful presence dominates the film’s spectacular final act, when all the main characters converge at a rock concert being given by the boy band 4*Town. A visual tour de force, the concert positions Mei firmly at the junction of old and new, illustrated by the blending of traditional Chinese singing and 4*Town’s pop music, a magical alignment that brings to mind Bruce Chatwin’s book The Songlines, which explores the way in which aboriginal people sing the world into creation, making meaning through their voices.

For all the film’s depth and complexity, it is also a wonderful opportunity for Pixar to indulge in its playful side and dial up the humor. There are lots of Easter eggs here to please the fans – I spotted a fish that looked suspiciously like Nemo lurking in a koi carp pond, and the rabbit from Burrow adorns Mei’s notepad. Meanwhile the recurring images of dumplings surely allude to Shi’s Oscar-winning animated short film, Bao. Indeed, the filmmakers’ love of cinema is clear throughout the film. There are plentiful references to Isao Takahata and Hayao Miyazaki, the Japanese masters of animation, with echoes of the bamboo forest from The Tale of Princess Kaguya and the shape-shifting Japanese raccoon dogs from Pom Poko. When the kids are excited, their eyes enlarge like the eyes of anime characters, and when Ming transforms into a gigantic kaiju-panda and gatecrashes the concert, we understand why Grandma had announced the arrival of “Mingzilla.”

The overall cinematic language is remarkably beautiful, especially when it comes to the film’s use of color. The story takes place in the spring, giving the filmmakers ample scope to paint the landscapes in glorious hues of feminine pink and purple. We see flowers everywhere, both growing and represented in fabric.

Most important of all, of course, is the color red. Not only is red a symbol of passion and menstruation but also – as Mei’s father points out – of good fortune in Chinese culture. Mei’s red shoes and red pin show her allegiance to this color, but she wears a green pin too – the color preferred by Ming and Miryam who wear green clothing and shoes. If Mei is Persephone then it would follow that Ming is Demeter, the goddess of the harvest. Just as Persephone defied her mother by eating the red pomegranate seeds, so Mei defied her mother by going to the concert.

As for the film’s ultimate message – to find this we need look no further than the title, Turning Red. In the English language to ‘turn’ is also to change. Seasons turn, years turn and, as the Americans say, whole lives can turn on a dime. This truly is a story built on the power of transformation, a story that invites every audience member to look at themselves in the mirror and wonder: “What animal do I secretly carry inside?” Following the Shamanistic dimension of this story, this is indeed a fundamental question for all of us.

Dr. Maria Elena Gutierrez is the CEO and executive director of VIEW Conference, Italy’s premiere annual digital media conference. She holds a Ph.D from Stanford University and a BA from the University of California Santa Cruz. VIEW Conference is committed to bringing a diversity of voices to the forefront in animation, visual effects, and games. For more information about the VIEW 2021 program of events, visit the official website: http://viewconference.it

The Massive Creative Fellowship Behind ‘The Lord of the Rings: The Rings of Power’
‘The Dragon Prince’ Director Villads Spangsberg Talks Toonlines and Tough Challenges
Laurence Fishburne and Steve Loter Talk ‘Marvel’s Moon Girl and Devil Dinosaur’
Taking an Old-School VFX Approach in ‘All Quiet on the Western Front’
‘Natural Habitat Shorts’: Like ‘Ranger Rick,’ But for Adults
Framestore Sets Sail on ‘1899’ with New Virtual Production Tools
VFX is the ‘Thing’ for Tom Turnbull on Tim Burton’s ‘Wednesday’
We Need to Chat
END_OF_DOCUMENT_TOKEN_TO_BE_REPLACED