This beautifully designed film, a story of conflict between civilization and nature, stands in defiance of individualism, reminding us that despite our own strength and resolve, we still need the energy and healing power of the community. 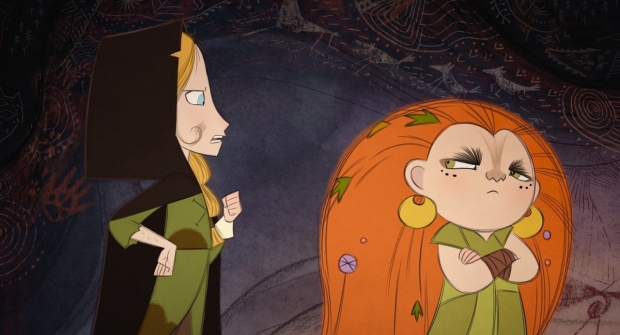 In Wolfwalkers, a young English girl named Robyn Goodfellowe escapes Kilkenny, the Irish town to which she has been brought by her father, in order to explore the wonders of the surrounding forest. In doing so, she turns her back on the world of human beings and opens herself to the world of wolves.

At this fundamental level, Wolfwalkers can be seen as a story of the conflict between civilization and nature. To this end, directors Tomm Moore and Ross Stewart employ two distinct visual styles. The town of Kilkenny is rendered in flat geometric shapes and dark colors. It is oppressive, solid like a block. Thematically this represents the English Puritanical religious views of 1650, and the embodiment of this is the Lord Protector. When he first shows up, the frame is almost devoid of color: his suit and headgear are black and white, with only a splash of red in the emblem on his flag, which symbolizes the violence and killing of the wolves.

In contrast, the world of the forest is an enchanted paradise. It looks like a three-dimensional watercolor painting – fluid and loose, filled with energy and life. When we see the wolves running through the trees, they move like liquid. All of this tells us that nature is the space of creativity, the space of liberation. Indeed, Mebh, a young local girl of similar age, openly tells Robyn, “Come and be free in the forest. Come and play.”

While the design of the town draws on woodcut illustrations from the period, the forest owes a clear debt to the highly decorative manuscripts produced by Irish and British monks between 700-1,000 AD, known as “insular illumination” and perhaps best represented by the wonderful Book of Kells. This artistic tradition used sophisticated interlacing and zoomorphic decoration to represent the complexity of nature, its deep interconnectedness, and its organic wholeness. In a luscious visual vegetation, images grow one into the other while animals lurk enigmatically in the background. Not surprisingly, this form of art is an ideal match for a story where nature plays a central role. Sometimes, the visual complexity and the dynamism of images in Wolfwalkers is so exuberant that we have the impression of entering a new visual world resembling that of the Viennese Secession, best exemplified by the work of Gustav Klimt.

Having passed from the hard, geometric world of the town into the fluid space of the forest, we see Mebh as the embodiment of the natural world. This contrast between town and countryside is echoed in the design of these two protagonists. Look at Mebh, and you will see that the shape of her hair resembles a leaf; her face is round like a heart. But Robyn, who desperately wants to be a hunter, has a face shaped like an arrow; in certain sequences her cape takes the shape of an arrow, too.

The world of nature has yet another aspect; it is also a space of magic and ritual. We first see evidence of this in the inscriptions on the walls of the cave where Mebh resides with her mother and the wolves. These markings immediately transport us back to a time when human beings first felt the need to represent sacred beings through drawing. In this way the cave represents our relationship to the divine world and reminds us that, in order to forge the future, we must first explore the past.

Venturing deeper into the cave, we discover Mebh’s mother represented in a way that evokes ideas of a Mother Earth Goddess. This returns us to the sacred moment when humans and animals lived in symbiosis, and again we see this story recounted on the walls of the cave. As we absorb the ancient narrative, we realize we are in the presence of the divine.

Even the shape of the cave is suggestive and full of meaning, resembling as it does female anatomy. In this and many other ways, the movie is a celebration of woman.

For example, Robyn is an archetype of the woman standing against the oppressive authority of men, just like Antigone stood against her uncle Creon in order to honor paganism and the oral laws of the gods. There are clear echoes of Antigone’s story in Wolfwalkers, where the townspeople are told repeatedly that terrible things will happen if they cut down the trees. At one point, the woodcutter explains to Robyn’s father that Saint Patrick made a pact with the pagan god. As for the Wolfwalkers themselves– they are the magical gods, the divinities who have existed in the forest since primordial times, since before history began.

Wolfwalkers is also a celebration of the senses. When Robyn passes from the hard, geometric world of the town into the fluid space of the forest – and in particular when she transforms into a wolf – Mebh tells her not to rely on her eyes. Instead, Robyn must learn to use her other senses – her sense of smell, or the feel of the earth beneath her paws. Mebh is there to guide her – and also us, the audience – into this sensory world.

In addition, beyond even the power of the senses, Mebh possesses the healing power of magic. Yet she cannot cure her mother alone. In order to do that she needs help. She needs the pack, the community, the collective. The power of the family. Even this heroine, this girl with superhero powers, cannot succeed alone. The ultimate message of Wolfwalkers, therefore, stands in defiance of individualism. If we as human beings are going to heal nature, we need each other.

Dr. Maria Elena Gutierrez is the CEO and executive director of VIEW Conference, Italy’s premiere annual digital media conference. VIEW Conference is committed to bringing a diversity of voices to the forefront in animation, visual effect,s and games. For more information about the VIEW 2021 program of events, visit the official website: http://viewconference.it.

‘Natural Habitat Shorts’: Like ‘Ranger Rick,’ But for Adults
Framestore Sets Sail on ‘1899’ with New Virtual Production Tools
Animated Characters: The Art of Babbitt – Part 1
Bruce Smith and Ralph Farquhar Talk ‘The Proud Family: Louder and Prouder’ Season 2
VFX is the ‘Thing’ for Tom Turnbull on Tim Burton’s ‘Wednesday’
We Need to Chat
Choc Chip Animation Riffs on Pop Culture in ‘The Art of Murder’
F is for Flake: The (Not So) Great Animation Robbery?
END_OF_DOCUMENT_TOKEN_TO_BE_REPLACED