Volume 2 of Netflix’s ‘Love, Death + Robots’ animated anthology challenges us to see reality through new eyes, encouraging us to be curious and reflect on the intimate connection between beauty and death, and what it means to be human. 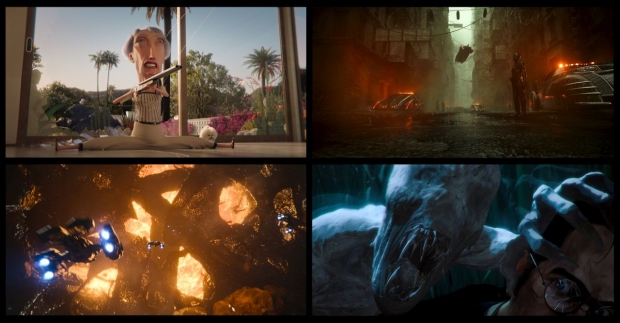 In Volume 2 of the Netflix animated anthology Love, Death + Robots, creator Tim Miller and supervising director Jennifer Yuh Nelson bring us eight tales of science fiction, fantasy, and horror, adapted from stories by leading writers in the field, including some real heavyweights like J.G. Ballard, John Scalzi, and Harlan Ellison. Each episode tells a unique story and celebrates a different animation style – from hyper-real 3D to crisp 2D graphics and stop-motion.

Thematically, the new season effortlessly delivers on the promise of its title, serving up stories of love, death, and robots in roughly equal measure. But its true success lies deeper. Like all art, Love, Death + Robots seeks to open doors leading outward into the imagination. By passing through these doors, we embark on a journey toward our unconscious selves. What we find there is revelation.

The concluding episode of the season, The Drowned Giant, is a masterpiece. It’s a powerful and profound reflection on the cycle of life and death. In it, scientist Steven Pacey narrates the mysterious appearance of a perfectly-proportioned human giant on a beach near a fishing village, followed by its gradual decay and dismemberment.

Like many of the stories in Love, Death + Robots, The Drowned Giant takes as its theme the tension between mortality and immortality, rendering the process of decay as a scene of ever-changing beauty. The image of the giant’s headless torso clearly echoes the paintings of Spanish surrealist Salvador Dali - and the placing of the enormous body on the beach brings to mind the metaphysical and enigmatic compositions of Italian artist Giorgio de Chirico.

The Drowned Giant is also rich in symbolic mythological language, not least in the way it portrays the dismemberment of a godlike figure. In Greek mythology, Zeus’ son Dionysus– sometimes conflated with Zagreus – is dismembered by the Titans. The implication here is that, before death, the beached giant was not only alive, but perhaps even divine. After death, the logos becomes flesh, then meat, then finally a rack of bones lingering on the shore – another image from myth that speaks to the all-powerful tide of time. So, we conclude that to be alive is to be fragile, yet in fragility there is also beauty and wonder.

Equally beautiful is Ice, a tale of brotherhood set on a frigid colony world far out in space. This episode’s stylish imagery – which could easily come straight out of a graphic novel – carries echoes of Russian cubism and the avant-garde. The moon hanging in the night sky paints the dire alien landscape with stark chiaroscuro lines. Its light brings meaning, if not hope, promising a warmth that is unattainable to the humans who prowl the colony’s gloomy streets, taking performance-enhancing drugs in their quest to achieve godlike strength.

The machines used by the colonists to plunder the alien landscape are massive and mysterious. So, too, are the whales who swim beneath the surface of a vast ice floe. When these whales finally break through the ice, we are witness to a life-affirming magic, and yet another revelation – here lies a world of hidden majesty that calls into question the wisdom of the “modded” humans who paint their streets with graffiti. Once more, in the form of the breaching whales, we are afforded a fleeting glimpse of the divine. Visual style is integral to Automated Customer Service, which shows us a glossy future world in which everything shines with perfection – except for the humans who live in it. In contrast to the sleek robots who care for them, these people are flabby and old, their features caricatured to the point of ugliness and beyond. This absurdity is played for laughs – indeed, the only character that looks remotely human is the dog!

In Automated Customer Service, the desire of humans for immortality is represented by their worship of technology. When the robots turn on their creators, this dream is shown as ultimately cold. Immortality, technology, and coldness are even more clearly aligned in Pop Squad, where the inhabitants of a future city pursue the dream of eternal life from the apparent utopia of their skyscrapers, which are, in truth, devoid of warmth. While these privileged immortals amuse themselves with opera, the real emotional life is taking place in the dystopian streets below, where the subjugated lower classes watch in horror as their “unregistered offspring” are terminated by child-killing patrols.

The dark side of technology is even more apparent in Life Hutch, in which a stranded astronaut gains the sanctuary of an emergency pod, only to find that its mechanized servant has turned killer. Here, as in The Drowned Giant, we see living flesh turned to meat, when the rogue robot treads on the astronaut’s hand, mangling his fingers.

But not all machines are bad. In Snow in the Desert, the robot turns out to be the savior. Immortality is at the forefront again, in the form of Snow himself, an undying albino on the run from bounty hunters on a remote, arid planet.

Snow in the Desert brings with it a rich, warm aesthetic, a stark contrast to the harsh metallic confines of Life Hutch. This suits a story that relies on us connecting emotionally with the characters. As for the savior robot herself, she is more human than human, and profoundly sensual – even her inner workings, stripped bare, are eroticized. No surprise that she takes up with the immortal Snow, a man who clearly appreciates sensuality. Even though he is on the run, he takes the time to acquire a rare batch of fresh strawberries from an alien vendor, relishing their taste and texture by the light of the setting sun. In this context, it is worth noting the symbolic properties of the humble strawberry. Like the pomegranate in the Hebrew culture, this seed-filled fruit can be seen to represent fertility and abundance. In Ingmar Bergman’s The Seventh Seal, two actors offer strawberries to the errant knight Antonius Block, in a scene that establishes them as the embodiment of innocence and uncorrupt perfection.

The imaginary world of Snow in the Desert is established with remarkable economy. The story may be short, but its highly cinematic setting is built for the big screen. Alongside the visual grandeur, however, there is beauty to be found in simplicity. One moment that lingers is a shot of the albino Snow lying back on his bed, his white hair rendered to perfection on the white pillow, with a single ray of light further enhancing the composition. Very sophisticated, and utterly gorgeous.

There is beauty in the grotesque, as well. In the anthology, two cautionary horror stories transport us to a universe of terrifying possibilities. In The Tall Grass, a man disembarks from a train only to become trapped in a field filled with the living dead. In All Through the House, two children discover that Santa Claus is not the jovial gentlemen they had always imagined. Both stories plant an uncanny element into conventional reality, revealing the existence of monsters in our everyday world. The monsters themselves are grotesque in the extreme, and ultimately, they represent the same fear of death that haunts all the stories in this season.

The inquisitive children of All Through the House gain revelation by looking upon a forbidden sight. This is not the only episode of Love, Death + Robots to reference the power of the gaze, nor to play with meaning through the manipulation of perspective. In The Drowned Giant, when we see the narrator reflected in the dead giant’s crystallized eye, we experience the disturbing sensation that he is inside the eye looking out at us. At the same time, we become aware of our own status as spectators – it is an unsettling, uncanny moment. Similar moments occur elsewhere. In Ice, we observe the boy Sedgwick spying on his family through a door. In Pop Squad, when Detective Briggs finally tracks down the unlicensed mother Eve, she changes his world-view by describing the gift of seeing the world through her daughter’s eyes.

This shift of perspective is the ultimate goal of all art, and all storytelling. It is a goal that Love, Death + Robots reaches with beauty and sophistication. By opening multiple doors onto countless worlds of revelation, it permits us to see reality through new eyes. It encourages us to be curious and to let ourselves be surprised. It shows us beauty and death, and the intimate connection between the two. Above all, it invites us to be human.