ATTN:’s Taye Shuayb discusses the rigors of producing and delivering episodes of the adult animated series every weekday while working remotely and safely during the pandemic. 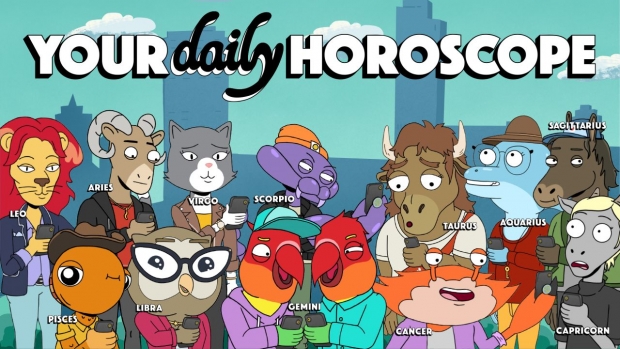 Born out of the humorous imagination of Hot Date’s and The Marriage Ref’s Jessie Surovell, Your Daily Horoscope, which launched last month, was one of the first adult animation series to debut on new mobile content platform Quibi. Each day, the 2D animated show offers viewers both much-needed comedy as well as astrological guidance.

“People love horoscopes because they can provide certainty and validation, especially when our collective realities are so uncertain this year with COVID,” says Taye Shuayb, VP of Production at ATTN:, Quibi’s production partner on the show. “And animation allows us to escape that reality, even for just 90 seconds.”

Starring Aggretsuko’s Griffin Burns and The Legend of Korra’s Janet Varney, Your Daily Horoscope follows the everyday lives of the 12 Zodiacs, personified as talking humanoid animals, who all work together at a start-up technology company called Estrella. There are 12 two-minute episodes released every weekday on Quibi, one for each Zodiac sign; over 60 people work on the show, including expert astrologer Aliza Kelly and executive producer Will Arnett, one of comedy’s own kings.

“When you take on an ambitious project like this, you need validation that you’re not out of your mind,” says Shuayb, whose team works on upwards of 20 different episodes each day, which represents 240 separate videos, 480 exports and 120 scripts.  “Will’s support and shared interest in the show was that validation. His track record of executive producing great animation was the perfect match for us, and we were all excited about the opportunity to design a character and personality for each sign.” Shuayb says the series has seen tremendous success on Quibi, “consistently coming in as their most-watched daily show.” A big factor is the relatability of the characters. “There was a lot of thought put into the quirky design of the characters,” Shuayb shares. “Visual development began with an amalgamation of all the pose-to-pose animation and illustration ATTN:’s in-house Art Director, Evan McEeaney, loved as a kid. Our animation team looked at the traits of each horoscope sign, asking, ‘Who is this character? What are they about?’ And of course, they wanted to make them relatable. The result is a group of fun characters who match perfectly with their quirky signs and storylines.”

But while a defensive Cancer crab, a frantic Virgo feline and a sassy Scorpio scorpion emphasize the show’s wit and humor, Shuayb believes the animation’s daily horoscope predictions and Zodiac characters also provide viewers with a sense of structure and consistency, a desirable feature amidst this year’s devastating COVID-19 pandemic. Quibi also provides users with the chance to read their personal daily horoscope while watching the show.

“The marriage of animation and horoscopes is a perfect union for what 2020 has brought us,” Shuayb notes. “All of us at ATTN: enjoy creating content targeted towards younger people, but that also appeals broadly, based on the issues going on in our world today.”

Some members of the Your Daily Horoscope creative team, who were horoscope skeptics, gained a newfound appreciation for astrology and the way the show has positively affected viewers. “At the start, some folks on the team were not initially into horoscopes but have been drawn into the experiences of the characters we’ve created,” Shuayb says. “No matter how strongly you believe in astrology, there is an innate curiosity to hear your own horoscope, whether we are ultimately dismissive or encouraged by what we hear. We all can glean something from the series, be it the astrology or the appreciation for the show from a creative perspective. It has something for everyone. It’s the perfect show for this crazy year, and it is why we are all hooked.”

Your Daily Horoscope is a triumph for ATTN: and Quibi on many levels, not only in the escape it gives viewers from this year’s pandemic, but also as a testament to the creative team’s determination to bring this show to fruition despite the pandemic. “It was tough in the beginning,” Shuayb recalls. “The show was specifically designed to be produced on-site to increase the speed of production. But, unfortunately, we went into production just before the pandemic hit.”

Due to the tight turnarounds of Your Daily Horoscope, which, as the name suggests, is a daily show, Shuayb and the team had to modify their pipeline to make the project flow as seamlessly as possible without sacrificing quality or the safety of the crew. Voice actors pivoted from recording in a booth to recording at home with a remote audio engineer, radio play phases were fused with animatic phases during editing, and the editing team took on rough comping in lieu of a storyboarding phase. The animation is produced using Adobe Character Animator, now being used on a number of animated series where fast turnaround times, such as daily broadcasts, are required.

“In the early stages, there were communication challenges, asset handling challenges, and networking issues related to the team working at home,” says Shuayb. “But it was especially impressive how our entire crew all came together to sort out these issues during all the stress the pandemic inflicted on the world. And it paid off.”

“I’ve enjoyed being one of the first shows to navigate the Quibi platform, pushing the boundaries of storytelling with its ability to flip from vertical to horizontal seamlessly,” Shuayb concludes. “Revealing more of the details in each scene allowed our team to get really creative with subtle ‘Easter eggs’ from the characters’ personalities that are both funny and insightful.”