Putting the Fun in Dysfunction: The Non-Humanistic Therapy of ‘HouseBroken’ 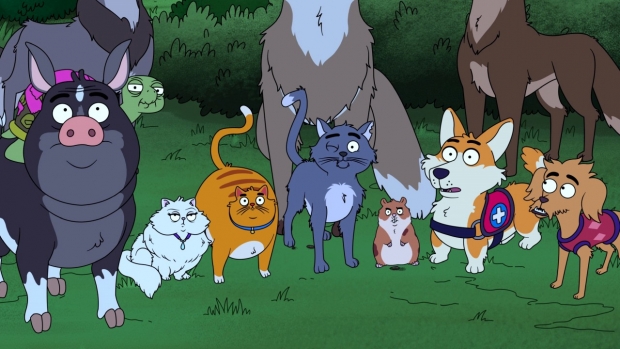 With a stellar ensemble of actors, a crack creative team, and more troubled pets than you can shake a stick at, Fox’s HouseBroken, which premiered in May 2021 and is poised to begin its second season this summer, has put the ‘fun’ back in ‘dysfunction’ for animal lovers everywhere. The animated series, animated by Bento Box and created by Veep colleagues Gabrielle Allan, Jennifer Crittenden, and Clea DuVall, follows a group of neighborhood pets and stray animals as they work through their issues inside and outside their therapy group.

It all starts when Honey (Lisa Kudrow), a standard poodle, opens her living room to her neighbors to come and support each other through the tribulations faced in pethood. Among those availing themselves of Honey’s services are Shel (Will Forte), a sex-positive tortoise with intimacy issues; Tabitha (executive producer Sharon Horgan), an aging Persian cat trying to adjust to life off the cat show circuit; Diablo (Tony Hale), an anxious, sweater-wearing terrier whose OCD causes him to hump everything twice;  Elsa (co-creator/executive producer Clea DuVall), a power hungry, know-it-all Corgi; and The Gray One (Jason Mantzoukas), a street-smart cat who has his one eye on Tabitha. The menagerie also includes a psychopathic hamster who is mourning the loss of her mate, George Clooney’s pig, a horny, teenage goldfish, and a possibly magical, slow loris with a mysterious past.

It's a merry and multifarious mix, the wrangling of which, one might imagine, takes some doing. And if you’re wondering just how they do it, we have answers. We spoke with creators Allan, Crittenden, and DuVall about the production, and the care and feeding of their comedic undertaking, beginning with what we can expect when the new season is let out of its cage. AWN: Let's start with all the fun up top. What's in store for Season 2?

Jennifer Crittenden: A lot is in store for Season 2. It's a lot more adventurous, out of the house, bigger stories. It's still rooted in therapy and neurosis and trying to work through psychological issues. The heart of the show is the same, in that Honey is still trying to help the crazy animals around her and confront her own issues, but it's gotten a little bigger and maybe a little sillier. There will also be some musical interludes and some new characters.

AWN: What worked well that you're continuing, or even expanding, and what didn't you get a chance to do that you're hoping to do in the new season?

Gabrielle Allan: I think what worked in the first season were the character dynamics. How the characters are very specific and each has their own point of view, and no one character is going to say something that another character would say. And I love the way that they interact with each other. They give each other a lot of grief, but underneath it, you can also tell that there's love there and that they have each other’s backs.

JC: One episode that I think really worked, and was one of my favorites last season, was the episode that Clea wrote where there's a murder in the house and they have to figure out who did it. It was great because it was the first time we got to see all the characters together and kind of turning on each other and questioning each other and surprising each other. We get to do a lot more of that this coming season, which I'm really excited about. The ensemble is really funny and having them all play off each other is super fun.

Also, in contrast to that, we also get to dig deeper into smaller groups and relationships this season. We get to see pairings that we didn't see before. For example, there's an episode where Honey and Diablo go head-to-head and that's really interesting. There are just so many different combinations of characters and we get to see the specific arguments, interactions, conflicts that they have.

AWN: How long did it take you to find the show’s tone? Was it there from the beginning or did it develop gradually?

But, as Jen was saying, I do think the tone is expanding. It's becoming a little bit broader and a little more surreal. We're pushing some boundaries, and finding creative ways to get the animals out of the house, so it's not just them sitting around. Like, how do we see their neuroses acting out in the world?

JC: Also, I think we're getting more comfortable with, and more excited about, doing things with animation that didn't really even occur to us in the beginning, because we all came from live-action. And the artists have gotten the feel of the show, so they're able to push things too. It's all kind of meshing – the tone isn’t changing, but becoming more of what it was. AWN: How much of the humor that we see is fully developed in the script or board stage, and how much of it really gets found once the animators get ahold of it?

JC: The animators do a ton to push the comedy. I mean, they have suggestions throughout the process. They know how to land certain jokes and how to make things work. So they're punching it up and improving as we go. But I think, in terms of dialogue and story, that's all nailed down before we start the records.

AWN: As a group of women creating a comedy, do you feel any additional pressure? Animation still feels like a boy’s club, though that’s changing more every day. Your show a great example. Do you feel you have to do anything differently, or that people are looking at the show differently than they might otherwise?

GA: The blessing and the curse of animation is that it keeps you so busy that you don’t really have the time to worry about things like that. You're just working on so many episodes at once, and the colors are coming back while you're still outputting the animatic, and there's always something to do. Maybe if I took a step back, I might feel that kind of pressure. But I feel incredibly grateful that we have the team that we have, and that we have the dynamic that we have, because that makes it so much easier and keeps it fun and light.

Clea DuVall: For me, as a woman in this business, I never think of myself as a woman in this business. I’m just a person in the business. When Gabby and Jen and I talked about working on something together, we were just three people who really connected and loved each other and wanted to keep working together in some capacity. And so we really approached this as friends and not as women. Now that I've been in different meetings in the animation world, I’ve seen there are not a lot of women and I know there are not a lot of female creators. So it’s really cool that we're doing this and, hopefully, the success of this show will have some part in making female creators in animation less rare. JC: I second that completely. I think had we known the numbers going in, it might have occurred to us to feel anxious, but we just had an idea we loved and we went for it. Also, as writers, I think we all have that idea that things just have to be really good – and it doesn't matter, male or female. But it is unusual, three women, plus our other producer, Sharon Horgan. I mean, it's a lot of women.

GA: I just wanted to add that where I am aware of being female, or of femininity in general, is in writing for Honey and in wanting to do right by her. It’s a little rare in animation to have a female lead. I know she's a dog, but she has issues that human women can relate to. And I revere her and I want to do right by her.

AWN: What's the most challenging part of this show for you individually?

JC: This is a more practical thing that I think is hard for all of us on this show – our episodes come in long and I don't know how to make them shorter. The animators have to do extra storyboarding; it affects so many people when the script comes in long. And we try so hard to keep it short, but we want to tell these stories with depth, and that's very challenging.

GA: We want to give them all time, and they're all fun, and they all have something to say. Our actors are so good and it’s a giant cast. There's just a lot to do for all of them. CD: The challenge for me, when I'm writing, is just thinking bigger and thinking visually. The way you deal with performance in live-action is so different, and there are so many unspoken moments, which you don't have as a storytelling device in animation as much. You can't linger on a shot of someone just thinking about something. And it was really hard to wrap my head around that in the beginning. I think I got better at it as time went on, but I'm really looking forward to continuing to expand my mind in that way.

GA: Left to my own devices, I would just have a scene with Honey and some insect talking for 20 minutes. Or it would be My Dinner with Andre with Honey and some other poodle. So I have the same challenges as Jen and Clea. I also find the schedule challenging. It's just go, go, go, go, go, go, working, keeping it all straight, having five episodes going at different stages of production at once, and jumping around from episode to episode. You don't really have any time to luxuriate and tinker with things. Sometimes you have to let stuff go. And I think that's a challenge for everyone. I mean, in live-action too, there's a point where you have to say, "Okay, this is done.” But when you're on such a crazy schedule, you really just have to keep things moving. So I find that part of it really hard.

AWN: Any other comments on challenges?

JC: Not to do too many poop jokes. That's a challenge for me, personally.