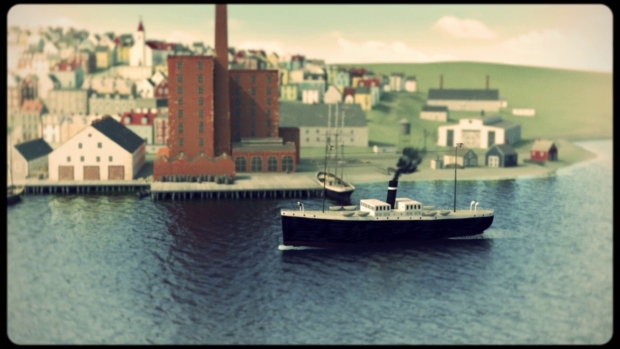 In the harbour of a small seaside town, two ships, one carrying explosives, head towards one another. A salty sailor strolls along the docks but pauses when he sees the ships gently colliding. In a flash, a massive explosion shatters the city and jettisons the sailor skyward. Hearing only the ringing in his ears, the thumping of his heart and the heaving of his lungs, the sailor soars towards the unknown.

Racing through life, we often lose sight of its temporality. In a snap, it can be taken away from us. But what happens at that moment when life and death appear headed for a collision? For some, time expands, senses sharpen, and memories pass by as we head towards a state of peace and bliss like no other.

Utilizing a wealth of techniques (3D, 2D, live-action scenes, photographs, and hand-painted scenes), along with a bold mix of comedy, mystery, philosophy, and playful experimentation, The Flying Sailor is a roller coaster meditation on a few seconds of life and a celebration of the wonder and rarity of being and breathing.

The Flying Sailor - Trailer from NFB/marketing on Vimeo. Ever since his remarkable debut, Another (2003), Sean Buckelew (I am Not a Robot, Lovestreams) has carved out a unique body of work that veers into magic realism territory. Whether exploring social media, the workplace, or domestic abuse, Buckelew’s films frequently straddle a line between understated realism and tragic absurdity.

In Drone, Buckelew continues that deadpan blend of Bunuelian magic realism (mixed with a hint of Kubrick), this time turning his attention to war technology. The CIA has created an AI drone named Newton. Unlike Kubrick’s rogue computer demon, HAL, Newton is a gentle, compassionate, and ethical drone who will ensure that deadly force is only used when necessary. However, during a livestream press event, Newton malfunctions and flies off. As the CIA races around trying to cover its ass, Newton soars through the skies trying to figure "himself" out.

Patiently paced and edited, this deceptively simple story takes shots at social media, military technology, and the U.S. government, but more so, Buckelew seems to ponder what happens when technology displays more benevolence, care, introspection, and, well, humanity than its human creators. This rough, raw, and brutally honest gem from Métis artist, Terril Calder, explores, via a little girl, the deeply troubling and divisive experience of growing up split between two cultures: your natural one and your colonized one.

Through Baby Girl, Nokomis, and that Jesus guy (well, this is the fantasy white Jesus – which the film acknowledges and questions - as opposed to the historical flesh and blood darked skinned fellow who would have been horrified at how his name and skin colour have been appropriated and altered by the Church and their ilk), Calder (Snip, Choke) contrasts the positive, compassionate Seven Sacred Teachings (Love, Respect, Wisdom, Courage, Truth, Honesty, and Humility) with the guilt and shame-based tone of the so-called Seven Deadly Sins (Lust, Gluttony, Greed, Sloth, Wrath, Pride, and Envy).

While this is Calder’s own story, it’s certainly no stretch to read the film in the context of the atrocious cultural genocide at Canadian residential schools. Meneath is a haunting and necessary reminder of the devastating consequences of colonial systems that continue to devour and destroy people every day.

Yet, for all its darkness and bite, Meneath is ultimately a story about hope and healing. Strikingly designed and animated, Calder has crafted one of the most disturbing, important, and urgent works on the animation circuit.

Animation needs more films like Meneath and more bold voices like Calder’s to get us squirming uncomfortably in our cozy seats and towards a place of not just compassion and understanding but meaningful action.

Meneath: The Hidden Island of Ethics (Trailer 01m05s) from NFB/marketing on Vimeo.

MENEATH: THE HIDDEN ISLAND OF ETHICS (Clip #1) from NFB/marketing on Vimeo. Spring. A time of change. Shedding off the weight of winter in preparation for the warmth of summer. It’s the time when we seem to find ourselves again, when hope, heart, and life regenerate.

Rites of Spring, Yiorgos Tsangaris’ non-narrative short, celebrates spring and the concept of rebirth through a rich, multi-layered celebration of nature and rituals that breathe new life into Cyprus’ artistic and religious past and a world that is slowly fading from memory.

A gentle breeze scatters coloured slices atop a flurry of passing imagery of people, animals, and nature, all accompanied by a gently steady beat that carries a whisper of menace, as though ready to burst into revolt at any moment.

Loosely based on a text by the Cypriot writer, Kostis Kolotas, Rites of Spring uses a collage of rich paintings, folk art, and archival photographs to reveal that the seemingly disparate worlds of religion and art have more in common than either might care to admit.

Rites of Spring Trailer from Yiorgos Tsangaris on Vimeo. Emma Calder (The Queen’s Monastery) returns with this brilliant, timely, and unsettling take on the mental health of a woman suffering from anxiety, obsession, and some general personality disorders.

During a therapy session, the woman recounts her main obsessions: a dying father, a chance meeting with a stranger on a train, her daughter’s well-being, and a murder she dreams she committed. Her preoccupations are so strong that they are seeping into her reality to the point where she’s losing sight of what’s real and what’s imagined.

Calder beautifully mirrors the woman’s fragmented inner state through a magnificent blend of collage, cut-out, objects, and live-action. This freewheeling mix of techniques creates an unbalanced viewing experience, injecting us into the woman’s confused state of being.

Calder has crafted not just a bold and empathetic take on an individual’s torment, but also an apt reflection of a society struggling to keep it together in the face of overwhelming anxiety, uncertainty, and paranoia. If Samuel Beckett and Buster Keaton met up at a bingo game in Kansas City on a Wednesday evening and decided to make animation films with a gaggle of chubby kids who could be extras from King of the Hill outtakes, it might have resembled the wonderfully mysterious and deadpan world of Japanese indie animator Atsushi Wada (The Mechanism of Spring, Anomalies, In a Pig’s Eye).

In Wada’s latest, well, let’s try to piece together a plot. It’s a coming-of-age story that touches upon issues of identity, gender, and rituals. There’s a group of boys half-heartedly performing some sort of ritualized dance under the careful eye of a supervisor. The supervisor, a whistle forever loosely perched between his lips, takes notes and corrects individual movements. Nearby, deep under the surface, there is some sort of science lab where a man tests out a giant who might have lost his way from Swift's Brobdingnag. Meanwhile, back on the surface, a girl sees the dance and desperately wants to be a part of it. I could go on, but it won’t help. It’s best that, like a child, you just sit back, relax, and savour the experience of beautiful mystification.

Wada’s world, with its ambient sounds and gentle pastel palette, instils a strange warmth along with a sensation of blissful confusion. It’s akin to being a child, wandering naively through everyday landscapes for the first time with no judgement, preparation, or expectation. At first, you have no idea what’s really going on, but it’s okay, you feel safe. There’s no hurry or urgency to uncover meaning. It will arrive when it arrives.

The amazing Lizzy Hobbs (I’m OK, The Old, Old, Very Old Man) returns with another soul-stirring wonder. A rebellious young woman would do anything to avoid attending a dinner dance being held in her honour. How much does she dislike the dance? Well, see, she befriends a hyena at the London Zoo and persuades the animal to attend the dance in her place.

It does not go well.

Hobbs clearly has a blast mixing paint, rotoscope, and collage into a frenetic piece of absurdity that skips and slinks between madness, comedy, and the grotesque. The result is a delightful mini art class and a surrealist take on class, gender, and mental illness.

The Debutante Trailer from Animate Projects on Vimeo.

Animated Characters: The Art of Babbitt – Part 1
Bruce Smith and Ralph Farquhar Talk ‘The Proud Family: Louder and Prouder’ Season 2
VFX is the ‘Thing’ for Tom Turnbull on Tim Burton’s ‘Wednesday’
We Need to Chat
Choc Chip Animation Riffs on Pop Culture in ‘The Art of Murder’
F is for Flake: The (Not So) Great Animation Robbery?
Re-VIEW: ‘Avatar: The Way of Water’ – A Miraculous Vision
‘Kung Fu Panda: The Dragon Knight’ Celebrates a Special Lunar New Year
END_OF_DOCUMENT_TOKEN_TO_BE_REPLACED