Executive producer Michael Olson talks about Season 5 of the hit Disney Junior show, premiering January 14, and how new characters brought renewed storytelling and production energy for the latest escapades of Bingo, Rolly, and their friends. 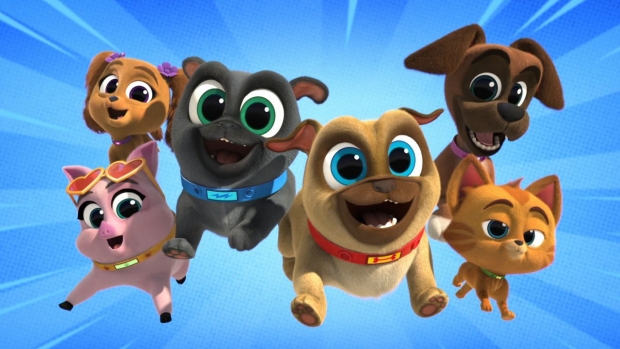 Premiering tomorrow, January 14, on Disney Channel and Disney Junior, is Season 5 of the hit CG animated series, Puppy Dog Pals. Consisting of two 11-minute stories, each episode focuses on pals Bingo and Rolly helping guide young animals on the finer points of being "mission pets," including creative problem solving, teamwork and resilience. Season 5 centers on Bingo and Rolly, who have opened a Doggy Dojo to teach young pets how to go on missions for their animal friends and humans.

The show’s creator, well-known comedian and actor Harland Williams, serves as consulting producer while also voicing the role of Bob, the pups’ devoted owner. When asked about the new season, Williams gushed, “So excited for Season 5 of Puppy Dog Pals. I remember when I first started the show, year one, I went to lunch with the showrunner and said to him 'I predict this show will go for at least five seasons, I could just feel it.' And look at that, we did it. It's no wonder with all the amazing, talented people we have - artists, voice actors, animators, the whole team, it's incredible. A dream come true and a huge THANK YOU to all the fans who love the show. I hope you love Season 5!" Michael Olson serves as the show’s executive producer; the series is a production of Wild Canary in association with Disney Junior.

According to Olson, we’ll meet many new characters in the new season. “In Season 5, we’re introducing a whole new cast of adorable young pets for Bingo and Rolly to mentor -- teaching them how to be ‘mission pets,’ going on missions around the world to help the people they love.” Newcomers include Darius (Ana's young nephew) and his two pets, Buster (an energetic boxer pup) and Leo (an adventurous Kitty), as well as Grace (a playfully mischievous neighbor) and her two pets, Roxy (a loving and assertive puppy) and Nougat (a high-energy piglet).

As the show’s executive producer, Olson oversees the overall creative vision of the stories and the season. “My main focus is to collaborate with the writers, the design team, the directors, and our illustrious production team,” he shares.

One big challenge for the new season was managing the production during the pandemic. “Season 5 was greenlit right as the lockdowns started, so we were right there with all of the other animation productions, learning how to collaborate and communicate remotely,” Olson explains. “We used all sorts of new technology, including an insanely helpful proprietary program our production company Wild Canary developed internally to help with real-time animatic edit sessions.” “Wild Canary was immensely supportive from the outset of the lockdowns to get everything remote,” he continues. “Miraculously, we had our entire set-up mostly online within a few days. As a result, we stayed on schedule and discovered a handful of efficiencies that actually made some of the creative and technical aspects go smoother than before the pandemic.”

From a storytelling standpoint, the new cast of characters provided Olson and his team an opportunity to bring new life to the show, leading to a new set of “fresh, silly” stories. In terms of the animation production, Olson notes, “This season, we challenged ourselves to come up with as many creative ways to reuse assets: sets, props, characters, etc. This resulted in a tight collaboration between the writing and design teams and enabled everyone to think outside the box. This interdepartmental teamwork wasn’t easy to pull off remotely, but it helped make the stories feel even more unexpected and fulfilling while keeping everything in scope.”

Like on each of the first four seasons, with Season 5, the biggest challenge has been creating stories that young kids relate to, understand, and find compelling. For Olson, because Puppy Dog Pals is a show that “strives to marry the undeniable cuteness of our characters and the head-scratching absurdity of ‘kid logic,’” that means it’s vital “to keep our young audience in the forefront of our minds as we make the show.” “We do everything we can to ensure our audience understands and connects to the emotions of our characters every step of the way,” Olson adds. “Aesthetically, we try to keep the show feeling bright and fun, with a brisk pace that hopefully makes it hard to look away. Along with all of that, our secret weapon is the undeniable brilliance of our composer and songwriter, Andy Bean. His music always adds a sort of magic ‘rocket fuel’ to our episodes that will grab the attention of anyone and put a smile on their face.”