The director and producer of the electrifying, high energy anime feature tackle segregation, cruelty, and protest against injustice in a future society forged by the collision of fire and ice. 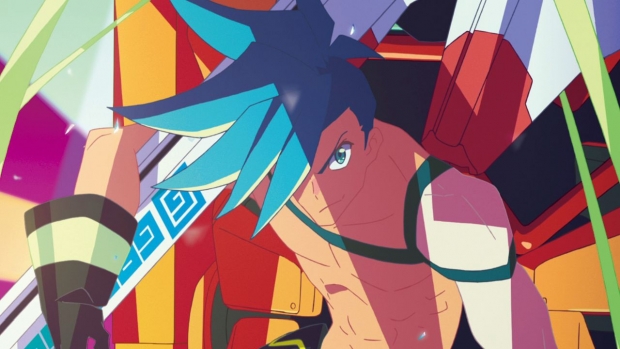 It’s been over a year since Gurren Lagann director Hiroyuki Imaishi debuted his very first, and very colorful, feature film Promare, which next month marks one year since its U.S. release. The award-winning Japanese animation, which grossed $17 million worldwide and was just released in a Collector’s Edition DVD August 4, jolts viewers with an explosion of vivid and electrifying abstract artwork, mixing 3D and 2D animation, and highly accelerated pop music.

“Expressing the high-wired characters from Mr. Nakajima’s script with Mr. Koyama’s cool and pop design and colors filled the film with both parts that were easy to watch and parts that were excessive,” says Imaishi. “And I believe that’s what makes the film fresh.”

Promare’s animation is energy itself, but the illustrations speak to much more than just aesthetically enticing action scenes.

“This film’s main theme is the ‘fusion of two elements,’” explains Promare producer Hiromi Wakabayashi. “The story has two protagonists with their own goals that collide yet eventually work together. We wanted to illustrate that with visuals rarely seen in Japanese animation.”

As the film begins, a wide-spread catastrophe, known as the “Great World Blaze,” causes humans to spontaneously burst into flame from the inside out. The unexplained event kills half the world’s population and, as a result, some humans develop a kinship with the flames they harbor inside and harness new pyrokinetic abilities. These people become known as the Burnish. Three decades later, the city of Promepolis hires firefighters like Galo Thymos and his group Burning Rescue to help capture and imprison Burnish radicals who, according to Promepolis governor Kray Foresight, are believed to be terrorists. Using transformer-like rescue gear that fights Burnish fire with ice, Galo captures Burnish radical leader Lio Fotia, who is later brought to a Burnish prison by the Freeze Force. The story then unravels, revealing the unjust imprisonment of Burnish men, women, and children as well as the segregation of Burnish communities. Eventually, Lio and Galo become an unlikely duo, fighting for Burnish freedom.

For director Imaishi, flames and frost are at the very heart of Promare’s message of unity, as well as taking action for a just cause.

“I was interested in the concept of a flame, which is an indefinite shape and a presence that can only be recognized when it is moving,” he shares. “It is a motif similar to animation, which can only bring a picture to life by moving it. I thought it would be easy to convey the story of Galo and Lio, who symbolize complete opposites by using elements that are also opposites - fire and ice - to be in conflict, yet coming together to achieve the same goal.”

Promare’s illustrations of prejudice and two different communities coming together to fight a corrupt police force are even more relevant a year after its initial release, with the global George Floyd and #BLM protests that began in May and the recent spotlight on police brutality against African American communities. Promare, which was digitally released in the U.S. May 19, even includes a scene featuring Lio turning into a fluorescent, larger-than-life flaming dragon that sets Promepolis ablaze in protest of the Burnish people being tortured and killed, a similar image to the protest fires that began in Minneapolis and took place in other cities across America. “When I first read the script for Promare, I thought that the themes were very contemporary,” Imaishi says. “But when we were making the film, I didn’t imagine the world would be in this situation.”

“We didn’t make this film with a specific event in mind, but I do feel that the problems in the world today isn’t just a current problem but something that has been there for a long time, and it has manifested around the same time as the film came out,” Wakabayashi adds. “I do feel the atmosphere of this era has been naturally incorporated into Promare.”

Though the film is, of course, a work of fiction, Imaishi says he, Wakabayashi, and the rest of the creative team did “try to depict the emotions in the film realistically,” resulting in not only a relatable story, but also a believable one. Wakabayashi also explains that fiction allows creators to put words to hopes and dreams, such as complete world peace, that some days seem out of reach.

“I like the scene where Galo tells Kray that he’s going to save Lio, the Earth, and Kray,” says Wakabayashi. “He didn’t just choose one; Galo chose to save everything. And it’s something a character can say and do in fiction, and I believe that is what is worthy of depicting using animation.” It’s an empowering message Wakabayashi and Imaishi are getting the chance to explore and illustrate once again with their latest animation project, Cyberpunk: Edgerunners, a 10-episode anime series based on CD Project RED's Cyberpunk 2077 that Netflix just announced this past June.

The story takes place in a world devoted to technology and follows a kid who is living on the streets in a city obsessed with body modification. To survive, the kid becomes a mercenary outlaw also known as an edgerunner. Wakabayashi says fans should “look forward to a new type of animation.”

“Most of the staff are the same as the ones involved in Promare,” says Imaishi, who will be teaming up with Neon Genesis Evangelion animator Yoh Yoshinari again for the first time since Gurren Lagaan for this project. “But we do intend to challenge ourselves in a different way, so please look forward to it.”

Whether it’s exploring the bounds of animation or society’s sinister flaws, Imaishi says he does “try to add features that would be easily recognizable as being different from other works at first glance.” Wakabayashi says that’s what makes working with Imaishi so unique and enjoyable, and what causes him to look forward to the other projects ahead. “Promare is the seventh Imaishi project I get to be involved in, and I can say this for sure: there is no other production that is more fun and satisfying than working with him,” Wakabayashi reveals. “Since this Promare was a feature film, I put in all the techniques I can offer now into this project so that it would be a culmination of the Imaishi world in terms of visual, story, music, and everything. As a result, I am delighted that Promare has become a film that everyone enjoyed around the world.”

Promare is now available on digital download, On Demand, Blu-ray + DVD combo pack, as a standalone DVD, and as a SteelBook edition of the Blu-ray, courtesy of GKIDS and Shout! Factory.