For the BASE Media CEO and Oscar-winning ‘Shrek’ franchise producer, nothing was accidental about their critically acclaimed new animated feature, now streaming on Netflix, other than the fact they actually got it made. 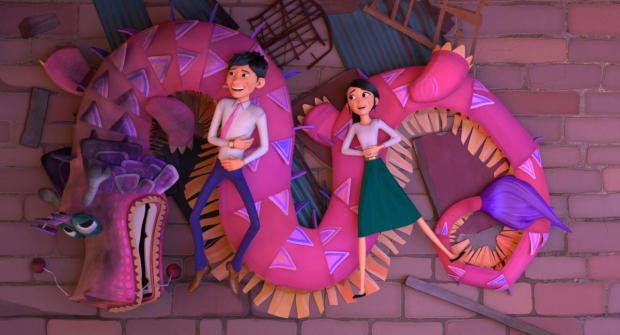 “It's much better looking than I thought it would be, given what the challenges were,” says the Oscar-winning Warner, who produced Wish Dragon along with Bremble and famed actor Jackie Chan; the film was written and directed by Appelhans – you can find AWN’s interview here. “I think the movie looks beautiful,” he adds. “There was so much thought and time put into it. Nothing was accidental on this movie, other than the fact that we actually got it made.”

Wish Dragon stars Mulan’s Jimmy Wong as Din, a young boy living in a densely-populated, working-class neighborhood in China who befriends a girl named Li Na (Natasha Liu Bordizzo). The two spend every moment together as children until Li Na moves to the big city with her father, leaving her old life, including Din, behind.

Years later, college student Din, determined to work his way to the top for the chance to see Li Na again, is given a jade teapot by a mysterious stranger. The teapot harbors a pink, fluffy, extremely magical, and extremely sarcastic “Wish Dragon” named Long - played to perfection by John Cho - anxious to serve the final three wishes to the last master he’s cursed to obey before being freed to make a beeline for heaven. The film is filled with bright, beautiful, lively, and lustrous animation, carefully employed to illustrate an emotionally fulfilling story focused on the importance of family, human connection, and what it truly means to be “rich.” The “challenges” for Warner and Bremble on the film were formidable, ranging from Chinese financiers suddenly looking to relocate the film’s setting from China to Chinatown in New York City, to the film’s Chinese release being halted almost immediately when COVID suddenly forced theaters to close. Plus, there was the not-so-minor hurdle of the team kickstarting their own animation studio from scratch. Co-financed by Sony Pictures, Sony Pictures Animation, Sparkle Roll Media, Tencent Pictures, and Netflix, Wish Dragon is the first animated feature produced by Bremble’s BASE Media, grown out of BASE FX, one of the top VFX producers in China. Needless to say, the production went from barely idling to full-throttle quite quickly.

“We'd been running a fairly successful visual effects business at that point for almost a decade,” explains Bremble, CEO of BASE FX, known for their work on films like Monster Hunt and Star Wars: The Force Awakens. “We'd done some animation service work, but we hadn't really ever made an animated film. So, we started our lookdev and storyboard process at Titmouse. We rented some space from them and had some of their artists working on the movie in the early stage because we had no infrastructure. When Aron joined the film, we moved most of the staff into his offices. In January 2017, I think we had four animation artists, and by October 2018, we had 185.”

While Bremble and Appelhans had been working together on Wish Dragon from the beginning, Warner - famous for producing DreamWorks’ Shrek franchise - had previously tried to buy Wish Dragon from Appelhans before being invited onto the project as a producer. “Chris had a one sentence pitch and some artwork and I'm like, ‘Yeah, let's go,’ but then he didn't sell it to me,” remembers Warner. “I got pissed off. And then he called me like a year later saying, ‘So, do you want to produce it?’ And I'm like, ‘Yeah, I kind of do.’”

He continues, “It's a deceptively simple movie and that's what I love about it. I think it's very easy to break it down as, ‘Oh, it's Aladdin,’ or it’s this and it’s that. But it's none of those things. And it's also all those things. I just love the fact that it had a really strong backbone, so that all the care could go into making each piece of that body beautiful and perfect.”

Once the project was off and running, fueled by young, talented animators as hungry and driven as the director leading them, the next challenge was ensuring the film’s authenticity; Appelhans, Warner, and Bremble dedicated their efforts to ensuring the China they represented in the film – both visually and narratively - represented the China that those familiar with the country, its people and culture, would recognize. And find entertaining. But finding the right voices from outside the team to contribute valued opinions was easier said than done.

“You’re asking executives in China, ‘Does this feel right?’ and it's the same joke as if you asked a bunch of rabbis a question,” Warner shares. “You've got that many answers. It's a giant country; there's no answer that's going to be right. So, you've got to find trusted people. And it took a while for us to do that, to find the core of the trusted voices and eyes, and then ask, ‘Does this make sense? Does this fly? Is it genuine? Is it real?’ The more we did that, the more open we were about the process, the more feedback we got.” Bremble adds, “The censorship regime in China also changed during the course of this movie, and so navigating that was a process. But we got through it, had great dialogue, and obviously made a great movie. I think anytime you make a movie on this side of the world, you're going to go through a non-linear process.”

“Non-linear” is one way to put it. Bremble goes on to say that creating Wish Dragon was like being on a ship at midnight during a typhoon. “The sails are ripping, the mast is coming down and everyone thinks, ‘Oh my God, we're going to die,’” he says. “And all of a sudden, Chris [Appelhans] comes popping up on deck and says, ‘Hey, look, I know it's bad up here, but there's a giant octopus underneath the boat.’ And he goes back below deck and everyone's like, ‘Okay, well, of course he’ll take care of that.’ About 10 minutes later, though the storm is still raging, suddenly Chris kicks the door open, steps out, throws a big tentacle on deck and says, ‘Okay, that's one. There's only seven more.’ The next thing you know, the storm's over and you're sailing out of it and it's all going to be okay.”

Warner adds, “Chris Appelhans is the single most diligent human being I've ever worked with. He was always ahead of the curve. He always knew what he was going into and stayed up till three in the morning to prep for it. He has so much passion.”

Warner and Bremble both agree that Appelhans’ Wish Dragon turned out a success, displaying as much innovation in its animation as in its depiction of the every-day lives of Chinese citizens. While Bremble says he and Appelhans brought Warner on because “we realized we didn't really know how to make a movie,” Warner says it was Appelhans that taught him the lesson in storytelling. “Chris taught me a lot about making films when I thought I knew it all, but didn't,” Warner concedes. “He had 15 paintings, early on, that were story moments. And those paintings, if you look at them just on their own, you know what the movie is. You know what it looks like, what it feels like. Having that much knowledge, and that much foresight, helped this not very big team, with not a whole lot of resources, make a great movie.” He adds, “I don't think the answer to making a great film is in having a great budget. I've been saying this a lot, and I really believe it, that anyone who's not making something new and unique, bringing voices in from around the world… anyone who's not doing that is not taking advantage of this new world and is not embracing the hunger there is to see new stories for people to feel represented and included. That's what I think the future is.”

After many successful screenings and a highly successful premiere with Wish Dragon, Bremble says they’re pushing Base Media into a more creative posture, less focused on service work, with roughly 80% of the studio’s head count now animation-focused, the majority of which is their own original IP.

“We’re currently in production on a really fun film called Lord of the West,” he notes. “And we're looking ahead. We believe in Wish Dragon. We believe that there's a future there. Most Chinese movies that reach the world are martial arts films. This is a movie that really talks about what it is to be a family and what it is to take on these challenges. And we happen to have a big pink furry dragon in it. It was quite magical and wonderful. But I think there's a lot of real heart.”