Prime Video’s ‘Do, Re & Mi’ Hits All the Right Notes 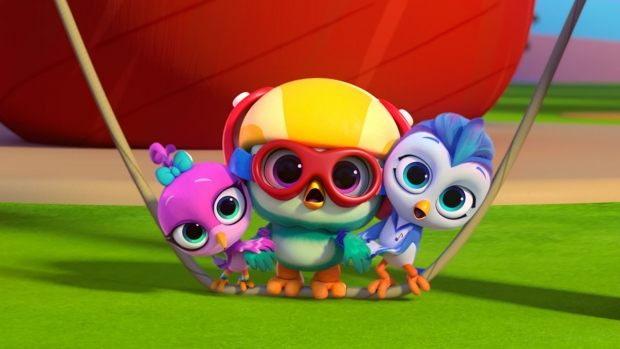 The animated preschool series, Do, Re & Mi, launches on Prime Video today, September 17, inviting kids into a world that not only entertains them with melodies and harmonies, but also educates them about instruments, notes, a new musical genre in every episode, and more. Three adorable birds, 12 episodes and a huge amount of music are now accessible to kids in 240 countries.

It’s a project that creators Jackie Tohn and Michael Scharf have had in the world since 2014.

“I don't want to call it luck, because Mike and I have worked our buns off for seven years,” says actor and performer Tohn, series executive producer along with Scharf, known for her role as Melanie Rosen on GLOW. “But every step of the way for me and Mike, we're like, ‘Is this going to happen? Or is this is going to die here?’ Is anyone going to care? You just don't know what it's going be. And at this point, we sort of feel like we've won the lottery.”

Scharf, known for The Moon and the Son: An Imagined Conversation, adds, “I think the hardest part was that everything is about simplicity in this industry. When you go into a room pitching that there has to be a new song and new genre in each episode and you’re trying to make an intro to musical education that's accessible to all kids around the world, most of the industry isn't used to hearing that big of a picture. Getting them on board and really understanding how influential the project can be is riddled with self-doubt. But at the end of the day, we’re just trying to improve kids’ lives, and everybody can get behind that.” The series, produced by Gaumont Television and Amazon Studios, has brought in Frozen’s Kristen Bell as an executive producer and the voice of blue songbird Mi, and Fast & Furious: Spy Racers’ Luke Youngblood as the melodious owl Do, with Tohn as a spunky, lyrical and very pink Re.

“The art is the one part of the show I did not have my hand in, so I can confidently say, without bragging, that it is the most beautiful children's show I've ever seen in my entire life,” notes Tohn. “It's just gorgeous. And it's shocking because we have this concept, and then you see this thing come to life and be so dynamic and so beautiful.”

The show’s three best birdie friends - Do, Re and Mi - live in Beebopsburgh, a colorful town with piano key sidewalks, guitar forests, beat-notes bushes, houses in the shapes of instruments and trees with windchime leaves.

“We really wanted to make sure that everything was connected to music,” explains Scharf. “Characters will have music symbology on their faces and their glasses, playsets, and the sets in the 3D animation will also be musical instruments. The plants in this world grow instruments. There are the falsetto forests and music mountain. Everything is fully engaged in musical education and musical terminology.” Under the guidance of their friend Maestro Moon, Do, Re and Mi go on adventures to learn about music and its role in helping solve problems. The show not only focuses on a new genre each episode, but also features new bird friends and original songs by Tohn, David Schuler, Brittany Dunton and Jake Monaco.

“I like to call it, ‘sneak-teaching,’” says Tohn. “I think what's special about Do, Re & Mi is that every episode has a musical genre, a musical lesson and an emotional lesson. And all of that is happening under the umbrella of this beautiful, exciting musical show set in a musical world. Through our curious characters, the kids watching the show are going to learn because our characters are learning in real-time. Kids are going to have such a great time watching, they're not even going to know they're learning.”

Scharf adds, “David and Jackie have written some of the most amazing music for preschool education that there is. And Fabien Ouvrard, our director, breaks the mold for preschool directing. He uses dynamic shots that, because of the music, gives us this ability to have music videos. So we can have trained shots and all these things that are not traditional in Pre-K education and Pre-K entertainment.” But Scharf and Tohn’s mission goes beyond just the animated series. Accompanying the launch of the show, the team is also releasing a storybook that retells the first episode of Do, Re & Mi, playsets and interactive musical instruments, a mobile game that incorporate aspects of music education - such as following a beat, music vocabulary, and instrument identification - as well as a teacher and family guide designed to support educators and families in helping young children build basic musical skills by instilling a foundational love for music.

“Music has always been a really big part of Jackie’s and my life,” says Scharf. “My mother wanted me to be a classical pianist and I was put in music education from Pre-K all the way up, even though I wasn't so great at it, but I had a wonderful time. We really wanted to create something that could give kids, who didn't have the opportunity, to get the experience we had.”

For Scharf and Tohn, they see Do, Re & Mi as a testament to the importance of music in a world that doesn’t view music as a priority in educational curriculum.

“When budgets get cut in schools, the first thing to go is music and art education,” says Tohn. “Since the beginning, we've been very passionate about our mission for the show, which is to make sure that music education gets into the brains and hands of kids.”

She continues, “Kids who learn music, they don't just become musicians. They become more functional adults. It helps with social skills. Arts education, without it, none of us would be where we are and it's a shame that it's the first to go. So, we're just really passionate about replacing the education that was lacking in schools. And after seven years, the creators say what they’re most looking forward to with the series premiere is watching kids sing the songs of Do, Re & Mi and grow from the experience.

“Kids singing the songs is going to be wild for me,” says Tohn. “Every person I know who has kids, I'm like, ‘If I don't get video footage of your kids singing these songs, I don’t even know what this friendship was for.’”

“And then getting to hear different stories of kids outsmarting their parents in music terminology,” he notes, “And at an advanced level before they are technically supposed to, would just be a huge dream for us.”