‘Poupelle of Chimney Town’ Challenges Us to Look Up, Not Down

Akihiro Nishino’s award-winning 3D/CG film features a young chimney sweep who hides his dream of seeing the stars - and world - beyond the smoke-filled town where he lives, until he meets an odd man made of garbage; film hits U.S. theaters December 30. 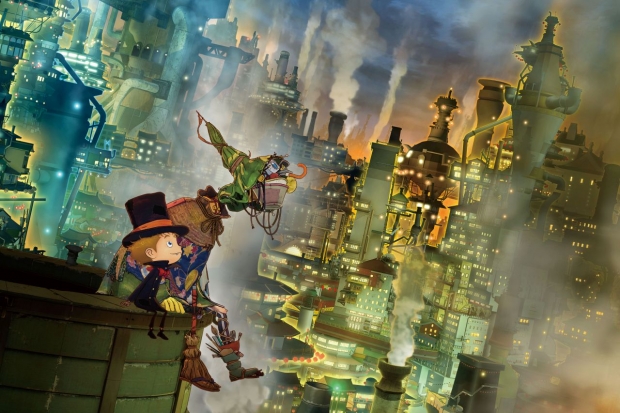 Five years ago, one story caught the attention of the normally small-budget children’s book industry after its author brought together over 30 artists to illustrate, design, and color the pages of “Poupelle of Chimney Town.”

With over 700,000 copies sold, Akihiro Nishino’s fantastical story about a young dreamer living in a town shrouded in chimney smoke quickly gained the attention, and affection, of readers. And, knowing his story would be special from the get-go, Nishino prepared a plan to reach a wider audience. Though he initially wrote 10 chapters when he began this journey back in 2011, Nishino decided that the book would cover chapters three, four and five, and that the rest of the story would be revealed in a feature film.

“When I finished writing the whole story – not even just the picture book, but the whole story – I immediately called the publishing company and told them, ‘This story is going to be on a whole other level. You are going to be quite surprised,’” says Nishino, who being both a comedian and picture book author, knew just how to bring to life the bizarre and yet magical world of Chimney Town.

The story begins in this smoggy city of hazy lights where a top-hat wearing boy named Lubicchi lives with his mother and works as a chimney sweep. Prompted by the stories his father used to tell the children in town before mysteriously disappearing, Lubicchi harbors a secret dream – to see the stars and world outside of Chimney Town. Most of the community members consider this to be a ridiculous dream based on pure myth, and Lubicchi keeps his hopes to himself. That is, until he meets Poupelle, a man made of garbage who doesn’t know why or how he has come to life.

“Poupelle himself, the garbage man, the way he looks, I thought that character would be perfect for 3D/CG,” says Hirota, who joined Studio 4ºC in 2001, first serving as their computer graphics director on Piroppo. “But it was a challenge to bring that 3D/CG into the rest of the film with all of the chimneys and smoke.”

That challenge was considerable: the smoke is one of the film’s main characters, billowing both high into the sky and down below in the streets and alleyways of Lubicchi’s city. If audiences feel an emotional toll from watching the film, a weighed down feeling, perhaps even a little claustrophobia by the constant presence of thick smoke, then Hirota and Nishino have done their jobs well. After all, this isn’t just a fictional story to Nishino, but the story of his own life’s struggle to keep looking up at the stars when others told him to look down.

“I’ve never written a story that was as honest and straightforward as Poupelle,” admits Nishino. “It’s all about my personal feelings and emotions, so it involved a totally different level of commitment. That’s why I wanted Poupelle to have this opportunity to be shown in a film.”

He continues, “It's quite a quite a personal story for me. Every time I would attempt something new, or whenever I want to do more challenging stuff, people said, ‘Don't do it. You're going to fail.’ Sometimes people say negative things or point fingers. Japan as a whole can be like that, similar to the village community in Poupelle. I want to challenge people like myself and encourage them to look up and keep doing what you believe in. This story isn’t just for me, it’s also for people like me.”

Since its 2016 publishing, the book has challenged the typical children’s picture book genre with a message that dreamers both young and old have been drawn to. The following Poupelle of Chimney Town has earned – from book to film – is diverse in age range; but for such a universally-important message, the story comes in a strange package. And not just because of its garbage man co-star or town of 1,000 chimneys.

The human characters are also unique in their own right.

“What we were careful about with Lubicchi in the film was making sure he didn’t emanate the typical human movements,” says Hirota. “If you look at him and the other kids, their movements are unexpected, awkward, and rough compared to the grownups. So, I wanted to make Lubicchi a bit like a puppet so his movements, while rough, are also sweet and toy-like.”

Puppet-like children, a magical – but rather stinky – garbage man, a thief with a hankering for explosives, an entire town that is scared of a swamp monster and believes stars exist only in imaginary stories, these don’t seem on the surface like characters audiences could relate to. But that was also Nishino’s goal.

“I didn’t want to create something that I assumed people might like, such as a love story between a beautiful girl and boy,” he says. “I don’t want to go with the cliche ideas at all. The truth is, I want to challenge certain ways of thinking and, through that, encourage people who want to try new things to keep looking up.”

Nishino adds, “It can be very tough because people laugh at new things. People bring down those who want to challenge themselves and standing up for your dreams is not an easy thing at all. I hope this story cheers up those people who have been pushed down and tells them to keep going, even through all these obstacles. Poupelle’s message is for those people.”

Hirota believes Poupelle of Chimney Town also has the power to make waves on a global scale. “For me, to create a new film is to create the future,” he explains. “And creating a future means creating a better world, and a better place for people in general. That’s how I’ve always seen things as a creator. Hopefully, after seeing Poupelle, people can feel like we could all make a better world.”