‘Pompo the Cinephile’ Goes Deep into the Messy Minds of Filmmakers

Takayuki Hirao’s new animated film is an ode to the power of movies and the joys and heartbreak of the creative process; movie now playing in select theaters across the U.S. 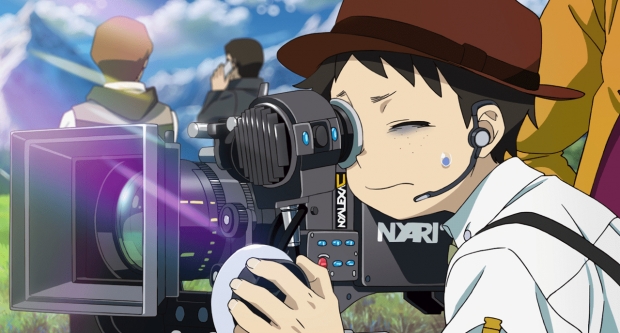 It’s a world of haughty actors and totally ripped actresses, decked out galas and stressed-out investors. Welcome to the world of dreams and madness. Welcome to Nyallywood, the setting of GKIDS’ latest cinematic effort: Pompo the Cinephile.

“I do think it has a universal appeal - or, at least, I hope so,” says writer and director Takayuki Hirao, previously known for his directorial work on anime series like God Eater and films like Majokko shimai no Yoyo to Nene. “It's really important to be chasing your dreams. In this world, there are so many people who don't fit in or think that they're in the minority, or they're suffering because they're in the minority of dreamers. If I can, through this movie, guide them to move forward, I'd be really happy.”

Hirao’s hopes for the film actually reference one of the more pivotal lines spoken in the feature: “Don’t just look down. Look ahead, or you’ll lose something important.”

Pompo the Cinephile - which released in U.S. theaters this past Friday, April 29 - begins with a gutsy producer named Pompo who is famous for her scandalous and trashy B-movies. Meanwhile, her timid, but movie-obsessed, assistant Gene has a dream to one day make great films that will shake the souls of viewers. But Gene believes he still has a long way to go to achieve his goals. Pompo believes otherwise and, after punching out an unexpectedly sincere script about a touching drama, announces that Gene will serve as the film’s director and sole editor. As Pompo and Gene assemble their cast, with legendary Brando-esque actor Martin Braddock playing the tortured composer protagonist, and young actress Nathalie Woodward seeking her first break as the disarming heroine, Gene wonders if he’s truly up to the task to take Pompo’s vision and find his own aria within the pages of her script… working from 72 hours of filmed shots. But, in the words of Gene, “I have no place to go but here. Only two choices: make a movie or die. So, I’ll stake my life on this.”

It’s a sentiment Hirao is also familiar with.

“When I was young, I was also the type that couldn't fit in with everybody else,” he says. “So, watching movies or reading manga or watching anime sort of saved me from loneliness. In that, I was really able to relate to Gene. So, I wanted to create a movie that has themes about the minority versus the majority and the original work by Shogo Sugitani had a lot of those same elements.”

Hirao’s film, produced by Your Name’s Kadokawa Productions and Clap Animation Studio, is based off a 2017 manga by Sugitani titled, in Japanese, Eiga Daisuki Ponpo-san. But the movie is saturated with classic Hollywood film inspiration. “I was really inspired by Scorsese's Goodfellas, with how the most important scene in the movie is at the beginning and meant to really catch the attention of the viewers,” notes Hirao. “The inspiration I took from Whiplash came from the spirit of having to sacrifice something to chase your dreams. And then there's also a scene where one of the characters, Mr. Peterzen, is cutting old film and the film that he's cutting is an homage to Taxi Driver.”

Specific to the design and sequencing, Hirao also uses film wipes for his film’s transitions, inspired by 127 Hours as well as the desire to drive home the never-ending, painstaking task of film editing and scene cutting. “The climax of this film is really about Gene editing,” says Hirao. “I wanted to express that. So, in the whole of the movie I did include a lot of wipes for transitions in various places.”

Amidst the story’s detailed and cutesy 2D anime, Hirao also incorporates 3D/CG and retro-colored animation during Gene’s scenes of editing both trailers for Pompo’s films and the entirety of his own movie. After beginning the computer editing process, Gene finds himself suddenly transported to a black void where film reels race past him. Equipped with a large sword, Gene begins running alongside the reels, hacking, and slashing away.

“Especially in the scene where he’s editing his own film, because it's a climax, I really wanted to make it dynamic,” explains Hirao. “If you were to show someone editing a movie in the real world, it's literally going to be the director sitting at a keyboard and just clacking away. But, since this is animation, I decided to mix reality and fantasy. I wanted to turn editing into an action scene. And, because this is animation, it’s not weird that Gene just steps into this world of fantasy where he has a sword instead of a keyboard.”

These scenes also illustrate the abstract and anxiety-ridden feeling of what goes on in the mind of a director as they piece together their film. “I do feel like I’m holding a sword, but I'm not slashing away,” says Hirao, laughing. “It's more like I’m just standing there, holding the sword wondering if I should cut or not.” While Pompo the Cinephile is a tribute to filmmaking and all the creative departments responsible for bringing a movie to the big screen, it’s a story, first and foremost, about the brave decision to dream, to reach for the stars no matter how unqualified or unequipped you feel.

“Toward the end of the movie, when Gene asks for a reshoot, I really put a lot of emotion in there because I've actually done that before,” says Hirao. “I made this huge mistake and there was a time when I thought that maybe I wouldn’t be able to make movies again. Of course, now, here I am, making this movie. But I really put a lot of that emotion into the scene because it happened to me before. I wanted to keep creating movies and Pompo was like an expression of my resolution to continue doing that.”

According to Hirao, the feeling of failure can sometimes be the best fuel for further ambition. Or, in Pompo’s words from the film, “Happiness kills creativity.” Hirao says he hopes to express with Pompo the Cinephile that there’s a home for everyone in the sparkly, colorful world of Nyallywood and wishes that the film will be an affirming push to those who need it.

“If the viewers have a dream that they're chasing, I would like this film to be something that would nudge them forward,” he says. “Maybe after they see this movie, they’ll leave the theater thinking, ‘Okay, starting tomorrow, I'll try harder for my dream,’ or if there was a dream that they’d been giving up on, maybe this will inspire them to go back to chasing that dream again.”

Tickets to the film are on sale at  PompoMovie.com and participating theater box offices. Theaters and participants are subject to change.