Shorts remain the heart and soul of the festival, and these films should contend for awards, applause and free drinks. 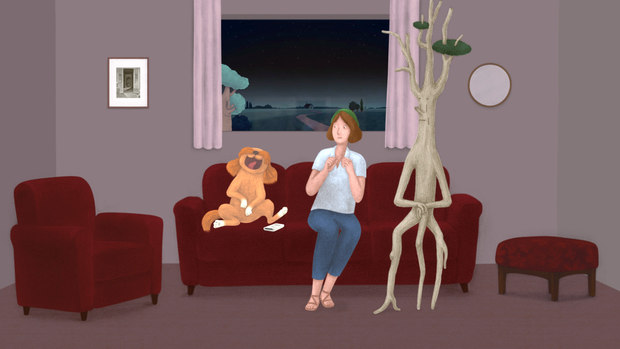 Though animated features get more and more attention these days, it’s the short films that remain the heart and soul of the animation festival. And for good reason…despite vast improvements in the quality of animation features, they still lag far behind the short film in terms of conceptual, technical and aesthetic innovation.

Annecy, more than most animation festivals, has given the feature increased spotlight. That’s more because of financial rather than artistic currency. Fortunately, the festival has not forgotten the short film and in fact, thanks in large part to Artistic Director Marcel Jean, has done its best to expand and improve the quality of their short selections.

Annecy has an assortment of short film competitions now: Special Perspectives, Off Limits, Young Audiences (not to forget Graduation films), but we’ll focus on the “main” shorts competition -- only the shorts in the main competition have a shot at the Cristal for Short Film (i.e. Grand Prize).

Here are a couple handfuls of films that resonated this year and should be in consideration for awards, applause, handshakes and free drinks.

Festival favorite Regina Pessoa (who won the 2006 Annecy Cristal for Tragic Story with Happy Ending) returns with an ode to her talented, eccentric Uncle Thomas. Using stop-motion objects along with her trademark engraving technique, Pessoa writes a wondrous letter of love to an Uncle who her family saw as a nobody, but who she saw not only as an influence on her own life, but as a unique and sensitive man going about life at his own pace, by his own guidebook.

Uncle Thomas is a tad too polished and classical for my tastes, but the story is told with such genuine love, that even a piece of crust like myself can’t help but be moved. Toomas Beneath the Valley of the Wild Wolves (Chintis Lundgren, Croatia/Estonia/France)

It’s another Thomas...well, this time, Toomas.

Following the massive success of the hilarious piece of kink, Manivald (2017), audiences were left wondering just what the story was with this gigolo/handyman, Toomas. When we last left him, poor Manivald discovers that his manly amour has a wife and kids! Oh horror!

In this prequel to Manivald, we learn just how poor sexy, objectified Toomas is forced to turn to a life of “handyman” after losing his job for refusing the advances of his lustful boss. Meanwhile his wife has discovered an interest in S&M thanks to a female empowerment group she has joined.

Silly, sexy, and littered with a cast of outrageous characters, this animated piece of Russ Meyer camp will surely be an audience favorite and do Manivald and his Mom proud. A guy accepts a job offer from a stranger on the street. He is satisfied with the wages for this simple job, until he hears strange sounds behind the curtains. Told with a sardonic, deadpan tone worthy of Aki Kaurismaki, Levers explores our battle between morals and money. One of the few blisteringly funny shorts this year, Rain starts with a guy accidently tumbling from a skyscraper rooftop. He is saved by a caped crusader and returned to the roof only to be pushed again... and well... let’s just say when it rains it pours. A simple commentary on courage, stupidity and how much we take life for granted. Creepy, hilarious and loopy take on an overbearing mother, peer pressure and a suffocating son, all while a flood is engulfing their neighbourhood. It’s a sort of darker Big Snit for floods and dysfunctional yet all too familiar single parent/child relations. Almost every year there’s a film that seems to come out of nowhere and pleasantly surprise. Tadpole is a strangely alluring and tense little film about an older sister who keeps telling her younger brother that her real brother died and that he’s in fact adopted from frogs. Beautifully drawn and executed, filled with intense colors, mysterious shadows, and strange surroundings, the ending will pleasantly mystify. With hints of Georges Schwizgebel, Catani dances us through a couple’s memories of their relationship, while showing us the fragility and fleeting nature of love and happiness. A young female hitchhiker meets up with a drug dealer and they head off in his RV on a drug fueled trip to nowhere in particular.  Told with great empathy, Popakul (whose previous films include Zeitgart and Black) nails the haze, daze, and confused rage of youth as they desperately seek an experience, a connection, something that will elevate them from the humdrum of their daily existence. I’ve a soft spot for the work of Xi Chen. He combines a silent film aesthetic with whispers of Igor Kovalyov to create mesmerizing pieces of animation poetry. This one involves a sort of dance between a man, woman and crane. The long awaited follow up to his beloved, Plug n Play, Michael Frei returns to a simple setting, this time exploring groups. A bunch of faceless people make decisions based on no real logic at all, but just seemingly random directions of different members of group.

Total nonsense. That would never happen in reality. One of my favorites is this witty piece of visual poetry from Jeong Dahee (The Empty, Man in the Chair, The Hours of Tree). A woman, runner, tree, old tree, and a dog (who walks on two legs) move about at different speeds reacting, acting, laughing, racing, contemplating in a series of different scenarios. In the end, Dahee seems to suggest that no matter the speed, no matter the perspective, no matter whether animal, tree, man, woman, or rock... we are all in this shit together. There’s something very comforting about that in these discomforting times.