Pictures from the Brainbox: A Weekly Dose of Indie Animation - 'Violet' 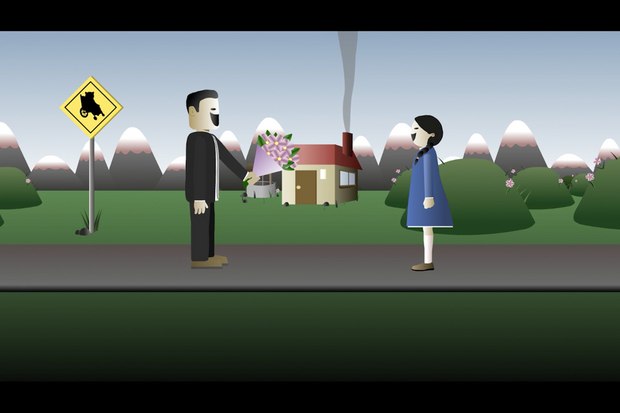 Nothing is funnier than unhappiness, I grant you that. Yes, yes, it's the most comical thing in the world.

The life as video game idea has been overplayed now, yet Ryan Ines’ student film, Violet stands out for its tight, economic and pinpoint absurdist portrait of life, loss and love.

If Samuel Beckett and Buster Keaton collaborated on a quickie animated soap opera, I expect they’d have turned out something akin to Violet.  The efficient pacing and precise story that overlaps between tragedy and farce feels a bit like something out of Beckett’s world. The non-stop, mechanical nature of the oddly smiling protagonists has parallels to Keaton’s world (though, Keaton’s characters usually have stoned faced expressions) and short works like Cops or Neighbors.

And like the work of those two greats, Violet, is somehow optimistic…. sort of. Despite the steady cycle of lunacy, tragedy and horror, the protagonists (well, some of them), keep moving on, with a defiant dumb smile.

What the hell else can one do?

Violet from Ryan Ines on Vimeo.