Pictures from the Brainbox: A Weekly Dose of Indie Animation - 'Teeth' 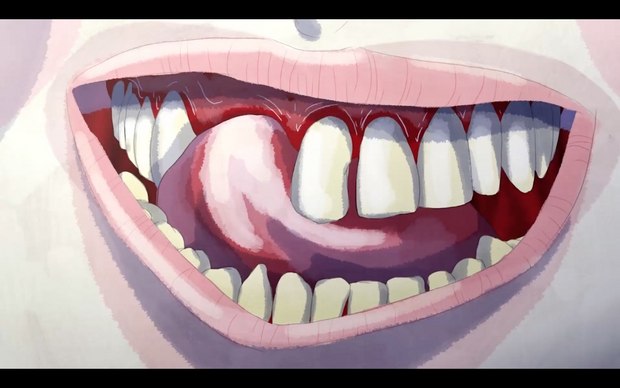 This slithery, grinding, haunting and insane tale by Tom Brown and Daniel Gray (t.o.m., 2007) ingeniously conveys the story of a man’s life through the history of his teeth. Combining the pacing of Robert Bresson with the lunatic first-person narrative of Poe, Teeth takes us inside the mouth of a deeply troubled individual (voiced to perfection by Richard E. Grant) and society.

“The story was born out of a few different stories and story sketches, says Daniel Gray, “It went through a few different versions with different tones and moods before it settled on what it became. It was influenced by what the then new Tory government was doing in the U.K. with austerity, which we thought was a bit narrow in it focus. They were closing libraries, cutting arts funding etc. Basically they were neglecting services that weren't seen as an obvious benefit to the country. Some of these things are very hard to replace.

The duo had Richard E. Grant on their shortlist from the start but because of their slow work schedule (“we were working between jobs”, says Gray), they waited till the last minute to approach him. “In the end,” adds Gray, “we phoned his agent and asked if we could show him the story. The picture was almost complete then, so it was a pretty pitch and he liked it.”

Gray admits they were a bit star struck initially, but that vanished quickly. “He was like someone you’d love to have as a best Uncle. Directing him was easy. He was a pro and seemed to hear everything we wanted from him. He was not at all intimidating.”

Naturally, Gray and Brown did an exhaustive amount of dental research, however there’s a mistake in the film. So let’s have a contest. You find the dental mistake and win... well… when I say “win” I mean in terms of respect, admiration and appreciation, not prizes. Good luck to you all.

teeth from holbrooks on Vimeo.