Pictures from the Brainbox: A Weekly Dose of Indie Animation - 'Spectators' 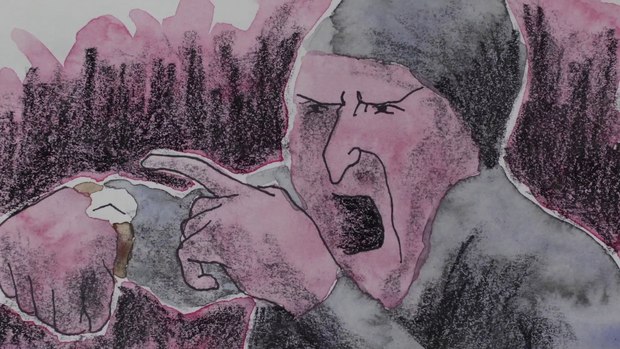 I was an avid sports fan growing up. Baseball, Football, hockey were my favourites. I probably invested a little too much into some of the games – especially those played by the Montreal Canadiens hockey club. Come playoff time, I’d be banging tables, shouting, jumping up and down. I even cried once after they were prematurely eliminated from the playoffs in 1980 (against the god damn Minnesota North Stars). Occasionally my stepfather would berate me for my behavior. I calmed it down a degree as an adult – but as my wife will attest to and laugh about, I still get pretty intense when the Canadiens are in the playoffs. Hell, last year when the Ottawa football team won the Championship for the first time in forty years, I got all blubbery and hugged my son – but maybe that was the beer(s).

It’s a strange thing. We invest so much time and temporary emotion in these meaningless sporting events. In Canada – the country that everyone sees as calm, peaceful and polite, we have had our share of  riots – not to protest unpopular or unjust political decisions, but because of the results of a sporting event. And it doesn’t matter whether the team wins or lose, Canadians will riot. When Montreal won the Stanley Cup in 1993, Montrealers rioted; when Vancouver lost the Cup in 1994 (and again in 2011), they rioted.

Win or lose, a game will not - and should not, unless you bet your life savings -affect our day-to-day lives, and yet some react as though the fate of their existence is solely dependent on the outcome.

That said, there is something fascinating about – as Ross Hogg’s wonderful 2013 student film reveals – observing this eclectic and electric mix of people (old and young, drunk and sober, fan and foe, working class and businessman), all totally, momentarily invested in the moment.

The ‘experts’ love to talk about the importance of embracing each moment because you just don’t know what’s coming next. Isn’t that precisely what sports fans are doing? Isn’t that beautiful – and terrifying?

Spectators from Ross Hogg on Vimeo.