Pictures from the Brainbox: A Weekly Dose of Indie Animation - 'Spank Shot'

Every Monday or so, Chris Robinson asks an animator how they made a particular film. Today, we kick off 2018 with Gina Kamenstky and her experimental hockey film, 'Spank Shot' (2017) 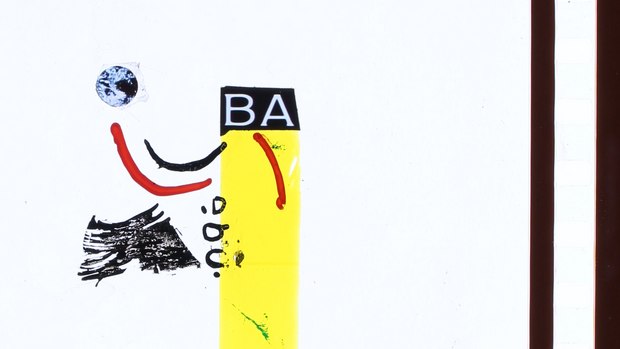 Gina Kamentsky is a US based artist, teacher and animator who creates kinetic sculptures and cameraless animation films, including: Jiro Visits the Dentist (2013), Tracheal Shave (2016), and If You Say Something, See Something (2015).

I work mainly on found footage from movie trailers and Spankshot was my first film on 70mm.

After preparing the surface by bleaching off most of the emulsion, I placed the film directly over a small video screen and used live video footage of hockey fights as movement reference for inking, painting and gluing small shards of film on the surface.  I left bits of yellow emulsion on the surface that turned blue when the final footage was inverted in After Effects. This created super cool accents and crackled the ink.

I created the film during a residency at the MacDowell Colony in New Hampshire and near my studio was an amphitheater built in the 30s with wonderful acoustics. Being a hot July day, I stripped naked and went ahead and slapped my butt to create percussive rhythms. I could barely sit down for the rest of the day!

I adore the limitations of working in a small field size. The process goes really fast and I can work intuitively with no planning. Because the frame size is so small I have to reduce everything to essential movement and strip out all the detail.

Trying not to repeat myself and asking big questions about the process and subject matter before diving into production. I always struggle a bit but that’s so important to making work I find interesting.

Absolutely, making art is like breathing, I’d drop dead if I couldn’t do it.

The Massive Creative Fellowship Behind ‘The Lord of the Rings: The Rings of Power’
‘The Dragon Prince’ Director Villads Spangsberg Talks Toonlines and Tough Challenges
Laurence Fishburne and Steve Loter Talk ‘Marvel’s Moon Girl and Devil Dinosaur’
Taking an Old-School VFX Approach in ‘All Quiet on the Western Front’
‘Natural Habitat Shorts’: Like ‘Ranger Rick,’ But for Adults
Framestore Sets Sail on ‘1899’ with New Virtual Production Tools
VFX is the ‘Thing’ for Tom Turnbull on Tim Burton’s ‘Wednesday’
We Need to Chat
END_OF_DOCUMENT_TOKEN_TO_BE_REPLACED