Pictures from the Brainbox: A Weekly Dose of Indie Animation - 'The Shirley Temple'

Every Monday or so, Chris Robinson asks an animator how they made a particular film. This week: Daniela Sherer talks about her short film, 'The Shirley Temple' (2013) 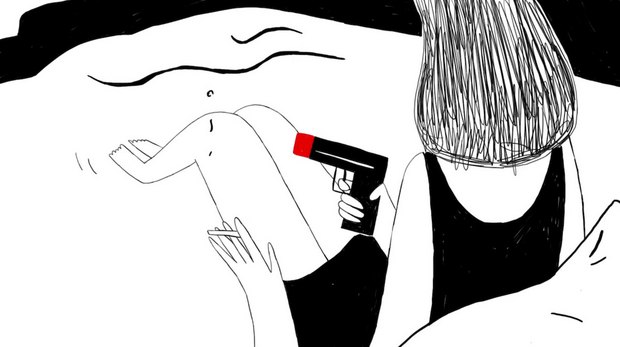 'The Shirley Temple' by Daniela Sherer

Daniela Sherer graduated from the Royal College of Art in London with a masters in Animation. She has worked on projects ranging from commercials to music videos, short independent films and animated sequences for features, as well as animation for the stage. Her clients include the Barbican Centre, Harvard University, School of Life and Wrap Records. Her animated films have won awards and have been exhibited in festivals worldwide, such as Annecy, Hiroshima, Zagreb, OIAF and Stuttgart ITFS. She draws frames lovingly.

Sherer’s student film, The Shirley Temple is a dreamy exploration of a child wandering through his mother’s cocktail party.  Fusing noir and Michaelango Antonioni, Sherer paints a fragile and fascinating abstract portrait of the confusing and mystifying border world where childhood and adulthood are awkwardly asked to co-exist.

I made this film digitally, frame by frame in TVPaint. I storyboarded it quite loosely and tried to approach it as intuitively as I could. The intent was to achieve something fluid and dreamlike in the animation, so I moved between abstract images and more literal ones.

I’m an obsessive drawer, and 2d animation has a lot of qualities I feel are important to the kind of work I want to make. In the case of Shirley Temple, I felt like the “boiling” images lent a certain fragility to the the story, and allowed me to morph very organically between shots. I chose black and white to give it that noir-ish, darker tone.

About 6 months: 3 for developing the idea, creating/arranging the music and sounds, and 3 months for just the animation itself. It was my RCA graduation project, so my senior year revolved mostly around this film.

The most challenging part of the process was trusting myself that I’d be able to make this “abstract-narrative” actually work out, and to make it feel like a complete piece. Just self-doubt about making something experimental that I think this film help me overcome to a degree. Animation takes so long to make, you can easily loose sight of the big picture and…worry (!).

I have a bit of a weird relationship with this film, the way I feel about it changes. But yes, there’s one part in the film that I always respond to quite weirdly for some reason. It’s the part in which a lady floats into a black hole of sorts. I always find I’m involuntarily slightly shaking my head when that comes up.

I think I do. I feel like it’s opened the door for me to continue to experiment and bring me closer to the kinds of films I want to make.