Pictures from the Brainbox: A Weekly Dose of Indie Animation - 'Seasick' 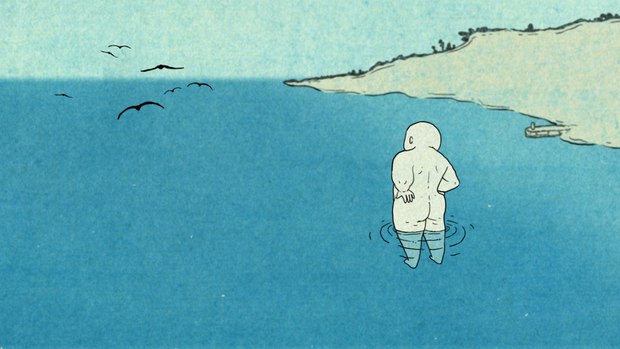 I just need this, ok?  It’s for those winters, like this one, like all of them, that plod along like a lingering houseguest whose welcome date has long expired.

I didn’t fully appreciate this gentle, meditative – and beautifully designed and animated daydream - from the director of Hedgehog’s Home, Eva Cvijanović - until I married a woman from the Balkans. She needs the sea like a drinker needs booze.

It’s already a life slamming moment to have to abandon your home (as both my wife’s and Cvijanović ’s family were forced to during the Bosnian war) but imagine giving up the shiny warmth of the Adriatic coast for sometimes frigid, blistering and isolating Canadian winters? Now that’s a sacrifice.

“Seasick”, Cvijanović told me a few years back, “was born from a series of drawings made on a train ride between Montreal and Toronto, on a cold November day. Making this film was my way of fighting Canadian winter by immersing myself in memories of swimming in the Adriatic Sea by the Croatian coast.”

Now let’s not be too hard on poor winter. There can be serenity in snow – as demonstrated by the protagonist here. The snow seduces and serenades the Buddha-like character, allowing him to peacefully drift to another time and place. There is beauty in snow. I know. I was born in the cold so I see it a bit differently. The ice is our coast. It’s like the flipside of the sea. They swim under, we skate over. The splash of the kicks, the slash of the skates. They share the same light breeze, warm sun and calm sky. They swim to soak in the momentary beauty of existence. We skate sled ski to defy the gods of nature. We skate sled ski to be free of their torment.

But mostly we all swim skate sled ski to keep our fucking sanity.

SEASICK from eva cvijanovic on Vimeo.

How Digital Domain Brought Photoreal Characters to Life in ‘The Quarry’
SCAD GamingFest: Building Shared Story Experiences with Diverse Character Design
Mission Critical: ‘Lightyear’s Journey to Infinity and Beyond
Putting the Fun in Dysfunction: The Non-Humanistic Therapy of ‘HouseBroken’
‘The Freak Brothers’: This is Your Humor on Drugs
The Heroic Logistics of ‘Superman & Lois’ VFX
‘Eureka!’: An Inventive Imagination Runs Wild in a Prehistoric Paradise
END_OF_DOCUMENT_TOKEN_TO_BE_REPLACED