Pictures from the Brainbox: A Weekly Dose of Indie Animation - 'Replacement'

Every Tuesday, Chris Robinson digests and dissects (relatively) new indie animation short films. This week he screens a snippet from Replacement (2013), a relatively unknown film about a child's dread about a dentist appointment. 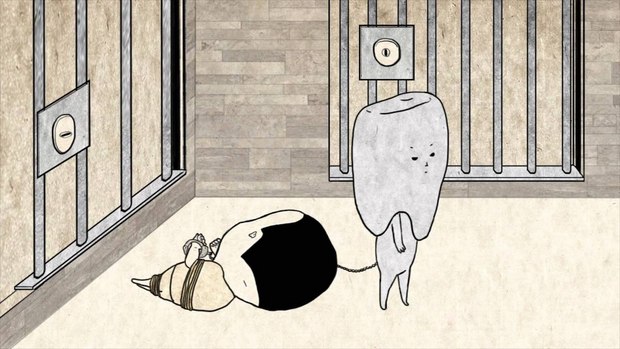 Much like the experience watching Sean Buckelew’s Another, Buyoung Kim’s Replacement (2013) is an oddly hypnotic and patiently paced film (it runs at about 18 minutes). The premise is remarkably simple and yet recognizable to almost everyone: In three weeks, a kid is scheduled to get his tooth pulled at the dentist. The film then shows us the endless agonizing and irrational anxiety that devours the poor kid leading up to the dreaded appointment.  If Michaelangelo Antonioni had made an animation short film about going to the dentist, it would probably turn out a lot like Replacement (except Monica Vitti would be in the main role).

Now, the film wasn’t shown all that much at festivals and we didn’t take it for Ottawa (though, fittingly, I took a long, pained time to decide), but there’s just something so inexplicably mesmerizing about the film.

When I spoke with Bo-Young Kim (who self-funded the film and worked on it for a year) a few years ago, she told me that, “one of the most traumatic experiences from my childhood was when I first had to get my tooth pulled. It was the most common way to pull their kid's tooth when I was young and I was really terrified of it.”

I think that’s what enraptured me about the film. Whether it’s appointments, surgeries, flights, job interviews… we’ve all had these periods of anxiety and dread – whether as a kid or adult or parent. Bu-young serenely and compassionately captures that glorious insane in-between period.

Normally, I only write about films that are available for the public online, but in this case, we only have a 1-minute-long trailer for the film. It’s enough to give you a small taste of the design and rhythm.

WetaFX Delivers a Monstrous 3rd Act for ‘Shang-Chi and the Legend of the Ten Rings’
‘The Spine of Night’: Redefining Fantasy and Animated Filmmaking
Luma Pictures is Well Suited to ‘Eternals’ VFX Production
‘The Musician’: Celebrating Human Resilience with Cutout Animation
Plague Diversions: Gazing at the Shortlist for the Best Animated Short Oscar
Producing Animation the Right Way on ‘Ron’s Gone Wrong’
‘Sing 2’: Getting Ready for the Big Time
END_OF_DOCUMENT_TOKEN_TO_BE_REPLACED