Pictures from the Brainbox: A Weekly Dose of Indie Animation - 'Phantom Canyon'

Every Monday or so, Chris Robinson asks an animator how they made a particular film. This week: Stacey Steers talks about her film 'Phantom Canyon' (2006) 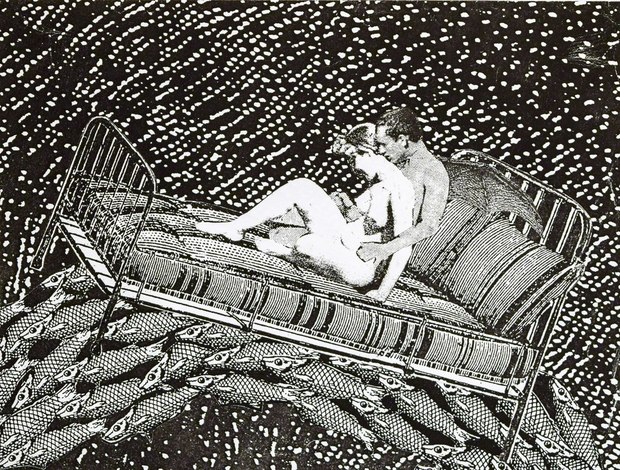 Stacey Steers is an American artist whose works (e.g. Night Hunter, Edge of Alchemy) use that glorious collage technique to create experimental narratives and themes of identity and desire. In her 2006 film, Phantom Canyon, Steers uses an assortment of Eadweard Muybridge images to tell a personal story about a relationship between a woman and winged man. In the film, Steers seems to be exploring the tricky tightrope of solitude, longing, loving and independence.

I started to experiment with collage animation and began combining images from Eadweard Muybridge’s human motion studies from the 1880’s with clip art of 19th century engravings.  I’m a technophobe, so instead of trying to work directly under the camera I made individual collages (usually 8 per second) so that I could reshoot if necessary. The bonus is you get a lot of control over the elements.

Originally I drew all my animation, but after some years I was finding my style too limiting and confining. I was interested in working with more neutral images, stuff less directly my own. I admired the ambiance of Larry Jordan’s collage animation and wanted to work in that kind of dreamy realm.

Phantom Canyon took me about 4.5 years for 10 minutes. Yikes!

Lining up the elements was a big challenge when I started this film in 2002. I used a lunch box setup but you couldn’t really toggle between images in the early days. In the end the technique itself carries a kind of hyper-intensity that is a result of the flickering of all the image elements. The field of the film becomes energized and somehow it suits my subjects. I’ve always liked the term “breathing” for instability in animation because it implies that the images have their own life force, which is cool.

Absolutely. My weird, obsessive approach to working with historic film imagery and illustrations has defined my career over the last 15 years. I lean towards personal, psychological animation in the surrealist tradition. My working process is intuitive and the unconscious and non- rational play a role. I’m not sure why but working with collage elements-- cutting, pasting and layering them-- seems to lead me to a more internal dimension that makes my work possible.