Pictures from the Brainbox: A Weekly Dose of Indie Animation - 'Over the Garden Wall' 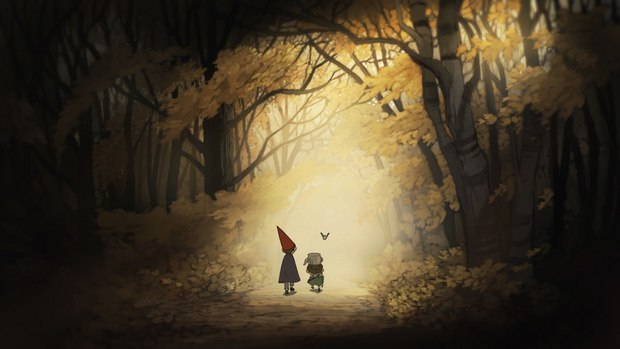 'Over the Garden Wall' by Patrick McHale

Every so often, some gems slip through the cracks of the mainstream damns. Patrick McHale’s Cartoon Network mini-series, Over the Garden Wall is one of those. As good as almost anything in independent animation the last few years, the series was unfairly shunned by most of the animation festival world. But, this made for TV work is a fascinating and utterly original blending of Dante, UB, Iwerks, Grimm’s Fairy Tales and Harry Smith’s Anthology of American Folk Music.

On their way home, two boys (and their frog, a reference to the old folk classic, My Frog Went a Courtin’ and perhaps also a stylistic nod to those old Flip the Frog shorts) find themselves lost in the woods. Inside they encounter all kinds of odd, wonderful and startling people and situations.

The opening song (composed by McHale and sung by American crooner, Jack Jones) establishes the off-beat tone as the singer/narrator talks unknown places and being lost in the woods (an obvious The Divine Comedy allusion, as is calling the bird, Beatrice). And like Dante, McHale’s woods are really just a metaphor for existence.

Over the Garden Wall is about the daily discovery of the beauty and weirdness of life. Those kids are us. They are searching not for a physical home, but a self, an identity (“know thyself” said a wise person a long time ago). You’re born and find yourself in the midst of this unknown world. Each moment and day we wander through forests trying to figure shit out.  Around us are friends, family, and strangers. There’s sun, sky, trees, and animals. Within and beyond lurk the shadows…the shadows of the past, present, and future, the shadows of the unknown, the shadows of the things yet to be uncovered.