Pictures from the Brainbox: A Weekly Dose of Indie Animation - 'On the Other Side of the Woods' 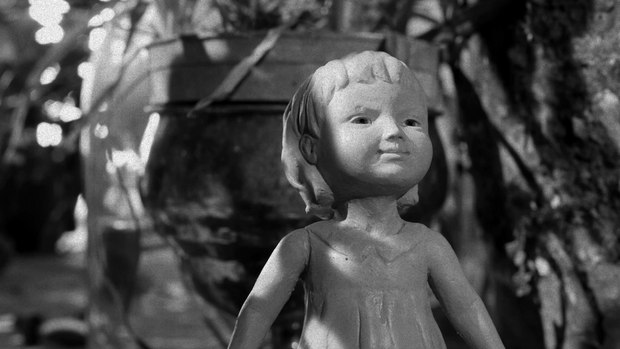 'On the Other Side of the Woods' by Anu-Laura Tuttelberg

The Estonian animation scene, always fascinating and relatively healthy, has nevertheless been criticized for its dearth of female voices. Women were always a part of the animation studios doing both administration and technical/creative work but until recently there were few directors. That’s changed dramatically in the last decade or so with the emergence of talents like Chintis Lundgren, the duo of Girlin Bassovskaja (Jelena Girlin & Mari-Liis Karula), and Anu-Laura Tuttelberg.

Tuttleberg’s first professional film, On the Other Side of the Woods (2014) is a captivating and curious take on fairy tales, creativity and identity. Fusing live action, object and clay animation, Tuttleberg explores the usually contrasting worlds of fantasy and reality. But instead of creating two distinct worlds – as many artists might do -  Tuttleberg blends them into a unique black and white world where potted plants sprout into trees, a toppled water bottle becomes a lake, walls become a forest.

“I didn't want to separate the two worlds,” says Tuttleberg, “but to make them fit together instead. I wanted to unify them all into one world and atmosphere. The black and white photography is very graphic and I like that kind of character of a visual, plus I started my studies in art with photography, with black and white analog photography and I find it beautiful and intriguing.”

What is equally fascinating is what we don’t see on screen. Years pass between the opening and closing sequences. The young artist at the beginning has – it seems - become a mother with her own child now. Decay envelopes the space. What has happened in the woman’s life? Why is this studio in such a condition? Was this her childhood home or grandmother’s house? Was it just forgotten during the natural passing of time? Did she abandon her fairy tale or artistic world for domesticity and the love (i.e. the hunter)?

Near the end of the film, the thread of time snaps, momentarily startling the woman. Something is lost, forgotten during the course of time, but the woman surprises us with a smile, perhaps aware that while the clock has run out on one period of her life, it’s in full swing on another, equally fertile period.

On the Other Side of the Woods / Teisel pool metsa from Anu-Laura Tuttelberg on Vimeo.