Pictures from the Brainbox: A Weekly Dose of Indie Animation - 'Orange is the New Black: Unraveled' 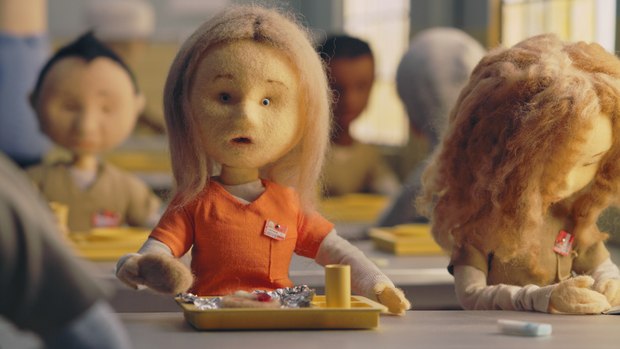 It’s been a good year for Špela Čadež. Her film Nighthawk has been tearing up the festival; most recently winning Grand Prizes at the Holland Animation Film Festival and Animafest Zagreb. Last week she unveiled a nifty promotion work for the Netflix series, Orange is the New Black.

Having watched exactly one episode of the series, I’m not gonna feign salivation. I will say that the promo version is a funny and beautifully crafted summary of the series thus far.

Exactly how an indie animator from Slovenia end up working on an internationally acclaimed (I assume) TV series?  “In January 2017, says Čadež, we released my short film, Boles (2013), online. In February we got an email from agency in London, that they have an open call for a trailer or recap of Orange is the New Black (OITNB) using puppets and they thought we should pitch for it. So we did. For our small animation studio Finta from Slovenia, this was a completely new challenge. And after making 3 pitch rounds, we somehow got the project.

In choosing which scenes from past seasons to recreate, Čadež and her team were given a long list of series’ highlights. “Some of them were a must to do,” she adds, “Some we could pick ourselves. They wanted to have a recap without dialog and since the whole show is mainly based on dialogue, it was quite a task to put all this in some sort of sense.”

Čadež was given a deadline of early May to finish the project, meaning she had approximately two months in total: “We filmed it all (4 min. of animation, 21 puppets, 22 sets) in just one month. We were a very small team. But it was fun making it. Hard work, but really an amazing team.

Production stress aside, Čadež was also worried about the reaction of the show’s fans: “They're real people, so making the design for the puppets was a challenge. But I'm very happy with the result, I hope both the fans and the actors are as well.”