Pictures from the Brainbox: A Weekly Dose of Indie Animation - 'My Mom is an Airplane' 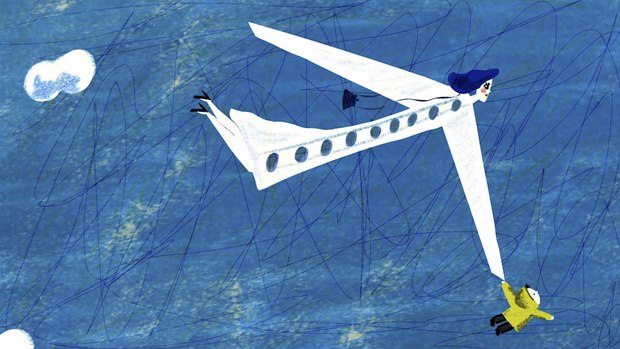 'My Mom is an Airplane' by Yulia Aronova

“They don’t make ‘em like they used to” said someone’s grandparent every minute of every day.

Well, not so in the case of Yulia Aronova’s UPA/vintage Golden books inspired beauty My Mom is an Airplane. In fact, it’s one of the most enchanting children’s animations made in recent memory. Beautifully animated, designed and scored (by her frequent composer, Lev Slepner, who she says always “hits the bullseye” when interpreting her musical ideas), My Mom is an Airplane is a unassuming tale celebrating motherhood (and women) using – unlike too many animation shorts today – minimal dialogue, instead relying primarily on – can you believe it!? -  the imagery!

My Mom is an Airplane isn’t some bogus pastiche; where it differs from the likes of UPA and that time period is through its portrayal of women. I’d hardly deem Aronova’s vision subversive, but this is a woman’s world. We see the mother flying through the skies above a handful of women from various backgrounds. It’s really a fairly unpretentious and straightforward celebration of women as mother’s, athletes, bosses, workers. It just is. They just are. And that’s precisely where the world needs to be. Everyone treated in the same great good and shitty manner as everyone else. That’s what honest equality should be all about.

“I didn’t think specifically about the 1950s or UPA, says Aronova. “But maybe their fundamentals of design and the elegance of the graphics are already inside of us.” From the beginning I had a big problem with the storytelling and I decided to change the method and started drawing page by page, like a book.”

As for the feminist slant, Aronova says, “I had a second part of the film – My Dad is a steamboat, but decided to keep the end open and leave it to the viewer’s imaginations.”  Thank the gods that she did. Otherwise it would have destroyed my brilliant pre/post/hyper-feminist Golden Books via UPA thesis.

My Mum is an Airplane ENGLISH VERS from Yulya Aronova on Vimeo.

Tags
Short Films
animated short films
2D
Children's Animation
My Mother is an Airplane
Russian Animation
UPA
Little Golden Books
More From ANIMATIONWorld:
Next Post
I Have A Question Joanna QuinnPrevious Post
Animators Unearthed - Stefan Schabenbeck
Related Content
Pictures from the Brainbox: A Weekly Dose of Indie Animation - 'On the Other Side of the Woods'
‘My Mom is an Airplane’ Soars at TIFF Kids Awards
ToonSeum Celebrates 70 Years of Little Golden Books