Pictures from the Brainbox: A Weekly Dose of Indie Animation - Marta Pajek 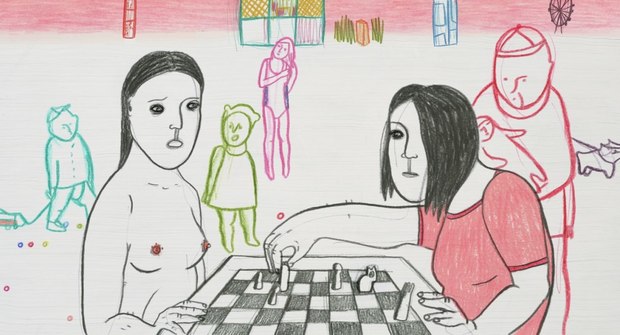 For many OIAF 16 attendees, Marta Pajek’s stunning short film, Impossible Figures and Other Stories II (2016) was the highlight of the festival competition.  Unfortunately, the OIAF jury didn’t seem to agree. Such is the nature of juries. Anyway… I was curious to see what else Marta had done and came across this beauty from 2012, Snępowina (Sleepincord).

Using deceptively simple drawings (with small scattered splashes of colours), Pajek observes what appears to be a sleeping woman. Now, on the surface it seems as though Pajek is striving to capture that crazy hazy space we’ve all travelled between sleep and consciousness, but is that what’s really going on here? Is this a trip inside a woman’s subconscious dreamscape or a more complex uncovering of individual awakening?

Kierkegaard wrote about how our fear of freedom (and with it, non-being) can lead us to live inauthentic lives where choices are made not from within but via the influence of others (i.e. prevailing ideologies of the time). In this state of anxiety, we seek out the easy paths that fall in line with the masses (e.g. let’s say… owning a mobile phone or subscribing to Netflix or other material stuff like that). Every day we are making big and small decisions that are perhaps not true to our nature. For Kierkegaard (and later existentialist philosophers), this was no way of living. It was not even existing. An honest life, in his view, would be one that embraces being and non-being (i.e. death). Courage is being able to have a stare down with non-being, not budge, just accept it and roll with the punches.

Or is the truth(s) of being (as the last scene seems to hint at) - with all its complex and contradictory layers – only to be found in our dreams?