Pictures from the Brainbox: A Weekly Dose of Indie Animation - 'Lotus Lantern'

Every Monday or so, Chris Robinson asks an animator how they made a particular film. This week: RISD Graduate Calvin Xingpei Shen discusses his student film, 'Lotus Lantern.' 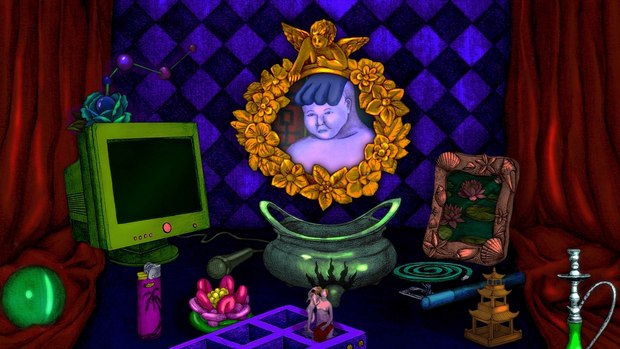 I can’t remember the last year that I didn’t see an interesting film from the animation department at the Rhode Island School of Design (RISD). Each year, there’s always at least one surprising work that shows conceptual and technical originality, that skirts from the mainstream paths that so many other schools and students predictably and blindly follow.

In 2017, two RISD films stood out – not just for their original story telling and style, but also for how they both touched on issues of both personal and national identity in unusual and bold ways. One was Mimi by Jeffrey Hsueh, about a mother who recalls – with great humour - her days living in China. The other was Lotus Lantern by Calvin Xingpei Shen, which uses the life of a Chinese singer to address issues of sexual identity and Chinese culture.

Having just released Lotus Lantern online, I asked Calvin to say a few words about the making of his film.

Lotus Lantern was my thesis film at RISD. We had a year to make an independent film from scratch. I wanted to make something related to my experience as a queer Chinese person. I started with an image I had in my head of two identical, gender-ambiguous monks kissing each other. They both had finger-like hair, which I thought would be fun to animate. Based on the Western oriented queer theory I learned in school, I thought to borrow from the classic Greek myth of Narcissus, coming up with the idea of the monk walking towards a mirror and getting enchanted by their own reflection. To bring my experience as “queer” in China into the film, I decided to use a song called “Blooming Flower and Full Moon” by Zhou Xuan, an old song that I grew up with, because the women in my family loved it. I animated everything with a 0.3mm mechanical pencil on A4 paper, photographed everything with Dragon Frame, tinted all the drawings in Photoshop, and put everything together with AfterEffects and Premiere.

The summer before I started this film, I watched Asparagus by Suzan Pitt. I was so mesmerized by the vivacious color and lush texture of the film that for a long time I couldn’t stop daydreaming about it. I wanted to apply that detailed and vibrant quality to my animation. I drew everything with a 0.3mm mechanical pencil so that I could render lots of details within the time constraints given. I painted everything in Photoshop using the “color burn” blending mode so I could get the color I wanted without losing the pencil’s texture.

It took around nine months from pre-production to post-production.

For a long time, when I started the production, I did not have a clear picture of the narrative structure. It was like having a really rough and emotionally straining relationship with someone you barely knew! So I decided to make these elaborate drawings of childhood objects to keep things moving. When I started drawing the lotus lantern, everything came together.

Yes, it was the most rewarding experience. I learned to trust myself a lot, to keep creating work despite mental blocks, and to keep reflecting on what I create.

How ‘Luck’ Applies a ‘Less is More’ Approach to Comedy
Z is for Zagreb: The Animafest Zagreb Exhbition 1972-2022
Dude! - ‘Rise of the Teenage Mutant Ninja Turtles: The Movie’ Arrives
‘Super Giant Robot Brothers’: A Milestone in Virtual Animation Production
‘Luck’ Aims to Bring Hope to Kids In and Out of Foster Care
Pre, Tech, and Post: The Many ‘Vizings’ of ‘Chip ‘n Dale: Rescue Rangers’
Hammering Out the VFX in ‘Thor: Love and Thunder’
END_OF_DOCUMENT_TOKEN_TO_BE_REPLACED