Pictures from the Brainbox: A Weekly Dose of Indie Animation - The Lingerie Show 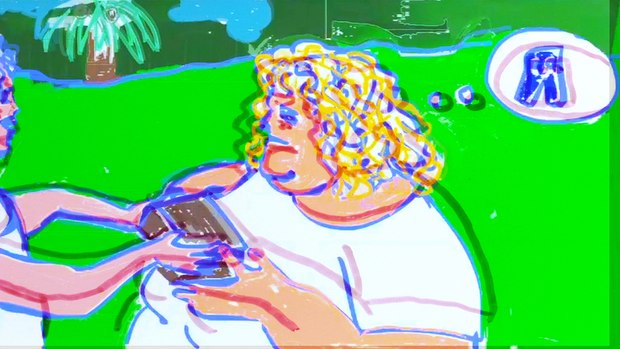 With a few exceptions… say JJ Villard (Son of Satan or his anarchistic, misanthropic attempt at TV, King Star King), Michele Cournoyer (The Hat, in particular), Andreas Hykade (e.g. We Lived in Grass), animation has always been a bit leery of getting its hands, hearts and souls a little dirty. When animators do dive into the darkness of the soul they tend to intellectualize or rationalize or beautify or just cower behind abstractions. Animators, let’s face it, are just a bit too nice and maybe a tad sheltered.

That’s not the case with Laura Harrison’s (a recent recipient of a Guggenheim Fellowship) refreshingly unhinged The Lingerie Show (based on the truish – come on…all memory is a form of fiction - experiences of American writer, Beth Raymer – who also narrates), an urgent awkward rambling chaotic first person recollection of a nightmarish period of petty theft drug addiction and fuckfests.  Harrison’s messy multi-layered techniques (drawing, painting, scribbling) aptly reflects the haze glaze and confusion of the Raymer’s rapid fire discombobulated narration (oddly enough the film’s most problematic part is Raymer – not her writing, but her reading, which, especially when dropping bits of lingo, sounds glaringly affected at times.)

Forget your cleansed anti-substance abuse PSAs, if you really want to scare your kids away from drug and booze abuse, just show them this beautiful nightmare. The Lingerie Show is a refreshing blast of grimy air, a breathless sloppy-schizo work dives ass first into a darkness that few in animation are courageous enough to explore, let alone acknowledge.

The Lingerie Show from Laura HARRISON on Vimeo.

Taking an Old-School VFX Approach in ‘All Quiet on the Western Front’
‘Natural Habitat Shorts’: Like ‘Ranger Rick,’ But for Adults
Framestore Sets Sail on ‘1899’ with New Virtual Production Tools
Animated Characters: The Art of Babbitt – Part 1
Bruce Smith and Ralph Farquhar Talk ‘The Proud Family: Louder and Prouder’ Season 2
VFX is the ‘Thing’ for Tom Turnbull on Tim Burton’s ‘Wednesday’
We Need to Chat
F is for Flake: The (Not So) Great Animation Robbery?
END_OF_DOCUMENT_TOKEN_TO_BE_REPLACED