Pictures from the Brainbox: A Weekly Dose of Indie Animation - 'Life with Herman H. Rott' 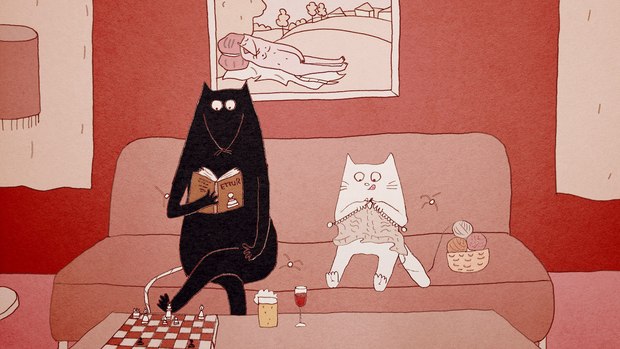 In a January 2017 article for The Guardian on “Romantic Realism”, Alain de Botton writes: “We expect love to be the source of our greatest joys. But, in practice, it is one of the most reliable routes to misery. Few forms of suffering are ever as intense as those we experience in relationships.”

Through films, art, music, books etc… we’ve been fed so much idealized nonsense about love. It’s really fucked most of us over because we’ve grown up thinking that love is supposed to be easy, that it’s supposed to consist of daily flower bouquets, fine wine, earth shattering orgasms. When, inevitably, it isn’t always those things, we figure there's something wrong, so we flee and keep on that search for something else, something better, something perfect.

Well, good luck with that.

Cleverly placing the apparent opposing species of a rat and cat together, Chintis Lundgren’s Life with Herman H. Rott  (co-scripted with her partner, Draško Ivezić) shows us how volatile and challenging it can be finding and maintaining a relationship. Often it does feel like you are worlds apart from your spouse, but we often forget that it’s that very difference that is the magnet to begin with (just look at what happens in the end when Herman changes his ways to appease his love… she bails!). It’s those variances that attract and unite us….and it’s just a matter of tweaking until you find that right balance.

Forget about kids, sex, finances and all that stuff, relationships are about finding complementary rhythms. It’s completely delusion to bring together two unique beings – toss them into a home with a boatload of responsibilities and expect them to find a single eternal harmonious note. It’s just not going to happen.  Love is not, as romantics might dream, some magical elliptical potion conceived by a wizard, it’s a demanding life skill that must be learned, practiced and worked on every god damn day of the week.

But, it's worth the effort.