Pictures from the Brainbox: A Weekly Dose of Indie Animation - 'LGFUAD' 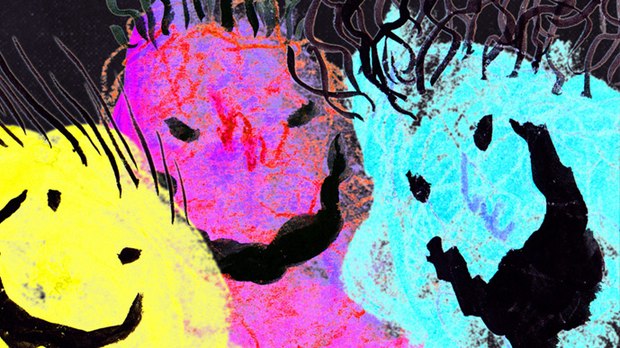 Ah…I have fond memories of being on stage during the closing ceremonies of OIAF 2010. As a clip of Rose Stark’s LGFUAD played following the announcement that her film had been awarded the prize for Best Undergraduate animation, I turned and walked to the back of the stage to grab the award. As I returned to the podium, a gaggle of people – mostly parents and children - were fleeing the theatre. One person glared at me and shook their head in disapproval. I honestly had no idea what the fuck had happened and even looked to the audience and asked what was going on? Someone replied that I surely must have known what had happened. And okay…I do enjoy a good provocation at times, so it was fair to assume that I set this up. Only I hadn’t. It was only later that I learned that the clip one of my colleagues had selected was of an assortment of penises. Probably not the best choice of clips – especially with kids in the crowd. But that happens when everyone is exhausted and burnt out by festival end. I mean, in the end, the parents were cool about it. I mean, personally, putting my parent hat on, I don’t understand the big deal. First, they’re drawings. Second, the penis is a part of the human body. Not a big deal. Shouldn't be a big deal. Rather than rush out and make a big show of it, why not just talk to your kids after and maybe explain the context of it all instead of embracing the tiresome outraged parent persona – which only ends up making a bigger deal out of something that need not be a big deal.

Meantime, here’s a mindfuck of a film about the depraved, liberated lives of ghosts. Beautifully animated, comfortably discomforting and, I guess, really a metaphor for youth, the days of freedom, fucking and carefree living.

Maybe don’t watch it with the kids.

Don’t ask me to parent your kids.

LGFUAD from Rose Stark on Vimeo.