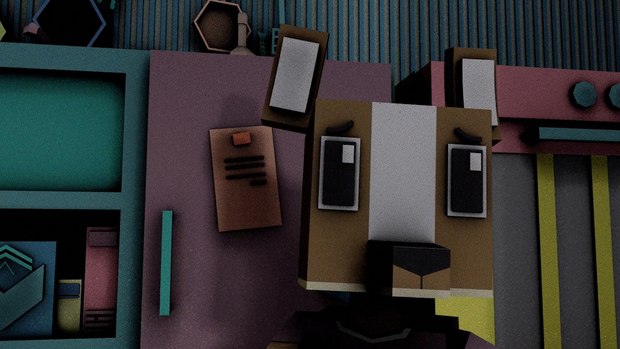 Look, I get exhausted with the plethora of dark, depressing animation at times too, but so be it. Animators and art in general doesn’t owe us a damn thing. It’s not mandated to cheer us up or provide an escape hatch or paint the world as it supposedly should be. Art can be a negotiation, a navigation tool designed to help the artist (and ideally, the audience) sort through some theme, issue, truth – no matter how uncomfortable or painful.

Calvin Antoine Blandin’s La Chair de ma Chère is one such work that’s clearly trying to sort through some painful shit: in this case a child losing a parent (to suicide, it seems in this case). This haunting psychological thriller looks at loss through the eyes of a child. Unable to process his mother’s death – and not receiving much support from his negligent, likely emotionally stunned father - the boy squeezes himself into a reality where she still safely resides.

Blandin’s use of anthropomorphic characters along with the stiff, almost Lego-like environment mirrors the confused and innocent perspective of a damaged suffering child who is just not mentally and emotionally equipped to deal with such a devastating event.

Guided by Blandin’s creeping, hesitant camera - that seems to observe through the distant, confused eyes of a ghost - we tentatively traverse vacant stairwells and corridors anxiously in search of a wholeness, a connection that will restore this domestic mausoleum back into a haven of love and comfort.

There are no easy answers to be found here (even the ending is somewhat ambiguous: has the boy “awakened” and returned to reality or did he follow his mother’s same fateful steps?), nor should there be; grief’s volume might quieten over time, but it never ever falls silent.

An Interview with Priit Pärn
‘Baymax!’ Provides an Rx for Humor and Compassion
How Digital Domain Brought Photoreal Characters to Life in ‘The Quarry’
SCAD GamingFest: Building Shared Story Experiences with Diverse Character Design
Mission Critical: ‘Lightyear’s Journey to Infinity and Beyond
Putting the Fun in Dysfunction: The Non-Humanistic Therapy of ‘HouseBroken’
‘The Freak Brothers’: This is Your Humor on Drugs
END_OF_DOCUMENT_TOKEN_TO_BE_REPLACED