Pictures from the Brainbox: A Weekly Dose of Indie Animation - 'Johnno's Dead'

Every Monday or so, Chris Robinson asks an animator how they made a particular film. This week: Chris Shepherd discusses the making of 'Johnno's Dead' (2017) 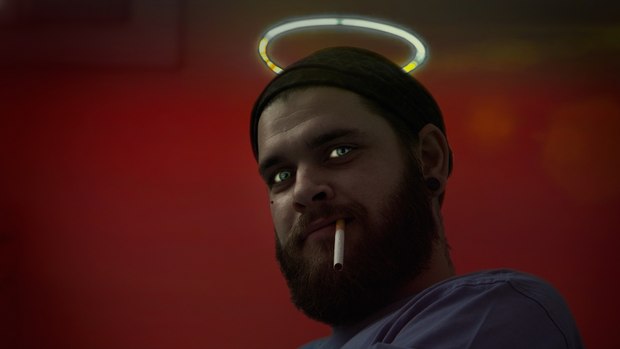 Chris Shepherd is an English animator known for an assortment of live-action and animation hybrid films (e.g. Silence is Golden, Who I am and What I Want, The Ringer) that frequently focus on decaying urban environments, troubled protagonists and chaotic families. Recently, Shepherd completed Johnno’s Dead, a sequel to his widely acclaimed short, Dad’s Dead (2002).

That’s a tricky question to answer as there are lots of techniques in Johnno’s Dead ranging from CGI to the Animation lot and live action. The film is the sequel to Dad’s Dead and that had a similar hybrid approach. I tried to make it so that the process was organic. I did five or six shoots over the space of a year and edited and animated in-between each one. I wanted to build the picture like it was a painting. I did this on the original film in 2002. I wanted to follow the same philosophy. Johnno’s Dead picks up the story from where the original ends. Our hero, played by Ian Hart, ends up going to prison. In the new film we see the central character released from prison and having to deal with the modern world and how it’s changed. Thirteen years is a long time to be away from the world.

I wanted to follow the same creative path as Dad’s Dead. Mixing live action with animation to create film which is reflective of someone’s thought processes. I’ve always liked to mix live action with animation as I like the boredom of reality to be awash with fantastic moments. I particularly like the show the imagination of underdogs in my films. Films like Silence Is Golden and The Ringer show the contrast between the mundane and fantastic. I like everybody in my story to have a vivid imagination and vivid fantasies.

The film took about a year to make. But you could argue that the production process lasted the distance between me making Dad’s Dead and Johnno’s Dead - which was 13 years. Letting the story ferment over this period meant that I could find out what had happened since I made Dad’s Dead. I am 13 years older now and so were the cast and crew. It was an interesting social experiment to get the gang together again.

The most challenging part of the process was knowing how much of the original style to use in the film. Sometimes I felt like that the ghosts of the past could take over the film and I wanted to find a new story that was relevant for today. It was also a challenge to make a story that worked on it as a standalone film. I wanted to make sure that you didn’t have to see the original. But of course if you do see the original there’s a lot of in jokes and moments that are reinforced with seeing both.

Yeah it was a fun project. It made me look at my work in a different way rather than being a filmmaker me, more like an artist. I could refer back to myself as a young man and figure out what I was doing. This is something that painting painters do all the time. Refer back to earlier work. I don’t like looking back. But it was an interesting experience. I was always curious to see what happened to my Dad’s Dead character. People keep saying I should make a third film - but maybe I’ll have to wait another 13 years before I can crack that one.

Taking an Old-School VFX Approach in ‘All Quiet on the Western Front’
‘Natural Habitat Shorts’: Like ‘Ranger Rick,’ But for Adults
Framestore Sets Sail on ‘1899’ with New Virtual Production Tools
Animated Characters: The Art of Babbitt – Part 1
Bruce Smith and Ralph Farquhar Talk ‘The Proud Family: Louder and Prouder’ Season 2
VFX is the ‘Thing’ for Tom Turnbull on Tim Burton’s ‘Wednesday’
We Need to Chat
F is for Flake: The (Not So) Great Animation Robbery?
END_OF_DOCUMENT_TOKEN_TO_BE_REPLACED