Pictures from the Brainbox: A Weekly Dose of Indie Animation - 'Hi, It's Your Mother'

In the last Brainbox of 2017, Daniel Sterlin-Altman discusses the making of his 2016 student film, 'Hi, It's Your Mother.' 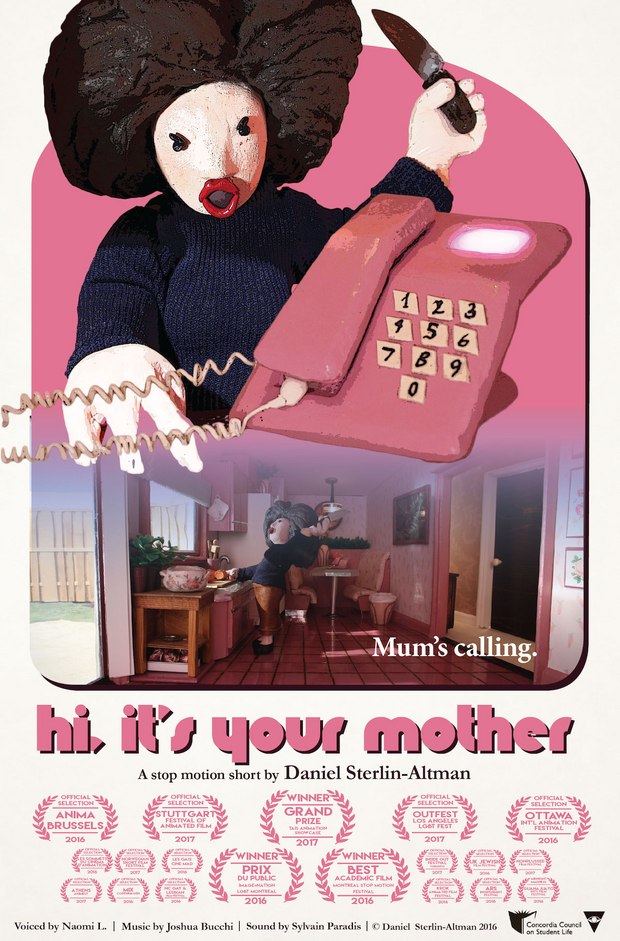 'Hi, It's Your Mother' by Daniel Sterlin-Altman

Recently unleashed upon the world of the internet, Daniel Sterlin-Altman’s Concordia University student film, Hi, It’s Your Mother (2016), takes us – in just a few minutes - through a rather chaotic family environment as it lightheartedly explores sexuality, identity, loneliness and that overall craziness that we call family.

It started as a string of visuals I wanted to see on screen. One of these visuals was of a woman in a fancy cocktail dress dancing to Bossa Nova music, another was of a mother bursting in on her son having sex with a boy and not noticing. How could I combine those images without having someone lose a finger?  On the technical side, Hi, It’s Your Mother is a reasonably traditional stop-motion short shot at 12 frames per second (times almost five minutes, etc.). I created armatured puppets of about eight inches in height, and human-scale hand puppets for the closer shots. The four miniature sets were created meticulously by hand with found objects, hardware, art supplies. Considering liquid is notoriously difficult to animate frame by frame, the blood animation went quite smoothly by using colour with hair gel painted in layers.

I find that stop motion allows for perfect balance between realism and the absurd. I love that in stop motion I can create an almost picture perfect world, place cartoony and completely fake-looking characters inside it, and people will still believe what they see. This world can be at once both relatable and visceral. Viewers can easily project themselves onto these simple puppet characters, so they can readily suspend their disbelief to be shocked by animated blood and gay sex, and moved by a mother reaching out to her son.

It took about 8 months from pre-production to the final output. Shooting time was three months.

Consolidating ideas and visuals into something cohesive and meaningful was certainly the most challenging part of creating HIYM. Initial drafts of the script lacked a degree of harmony, as well as empathy for the character of Lisa, the protagonist. It was very important for me to showcase Lisa as a person with agency over her life, albeit issues with anger control, and not simply a flailing mother in the kitchen. Achieving that balance was more nuanced than I’d expected. Oh most definitely. It’s an absolute pleasure to hear people laugh and squirm to the plastic, paint, rubber, and hair gel that I’ve manipulated into a movie.