Pictures from the Brainbox: A Weekly Dose of Indie Animation - 'Heart Chakra'

Angela Stempel talks about the making of her acclaimed graduation comedy, 'Heart Chakra' (2017) a comic take on the world of crystals and all things 'new age'. 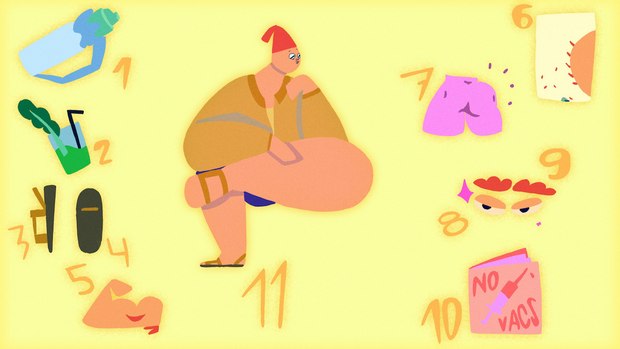 Angela Stempel is a Venezuelan-American artist born in California and raised in Caracas. Her work is inspired by people, rhythm, color and drippy shapes. From these influences she constructs narrative and abstract animated films, installation and illustrations.

After graduating from Tufts University and the Museum School in Boston, with a combined degree in Fine Art and Art History, she moved to New York to pursue a career in animation. She has worked as animator, compositor and assisting in fabrication in her time as intern and freelancer at several motion design studios in NY and LA. She has also directed several music videos and independent films.

Currently she lives in LA and recently graduated from CalArts with an MFA in Experimental Animation.

Her graduation film, Heart Chakra (2017) is a comic poke at crystal, horoscopes, and most iffy things that fall under the banner of new age faith and all that huckster stuff..

I made the film mostly in TVPaint, with some really essential compositing in After Effects. That last part I think adds a lot to the design and feel of the film.

I like using TVPaint the most when I’m working on a long film or music video because it’s the closest experience to me to animating on paper. I feel like the program just has less of the setbacks that working in the more common adobe softwares have. The interface is designed for animation and it’s good for planning, unlike my experience working in Photoshop, and the line doesn’t have a built in “memory” like in Flash. I do use both those other programs as well, but for a long project like this one it was better for me to be able to split up my shots and add editable sound into each clip. TVPaint just has a bunch of essential little perks that help with that.

The film took about 2 years from getting started with a rough idea to submitting it to festivals. I made it as my thesis for the MFA at CalArts, so we have 2 years to really work on these projects. The first year was very speculative though. I took a long time to experiment with the process and find the right look for it. The original idea had an entirely different plot and I was going to use cut outs and 16mm film. It really changed a lot since that time. The animation took around 5 months with a few months for sound and compositing.

The dialogue recording was surprisingly hard. It was really fun to do, but it shapes the tone of the film so much, I kept casting and recasting my lead actor and getting so many different versions of the dialogue. The writing was also quite challenging to do— to make a narrative that feels interesting and has the humor or personality I wanted it to have.

To be honest, I try not to watch the film if I can. Probably to avoid discovering the cringe moments. It still feels too fresh and the process of making it is quite demanding— spending 2 years on a film that is in some way or another “not working” for like 90% of the time that you’re making it, just to get to the end where things start to fully come together… Somehow it still feels really worth doing.

I wish I’d worked on the animation more. When I finish a project I always think that part of it could be better. I’m sure in a year I’ll have a whole list of things that make me cringe about it.

I do. I learned so much making it, and can’t wait to make more films. I still feel like there’s a lot I want to say in animating people and tackling narrative. Also, since it’s been almost a year, I’ve already forgotten about all the suffering that goes into it!