Pictures from the Brainbox: A Weekly Dose of Indie Animation - 'Effervescing Elephant' 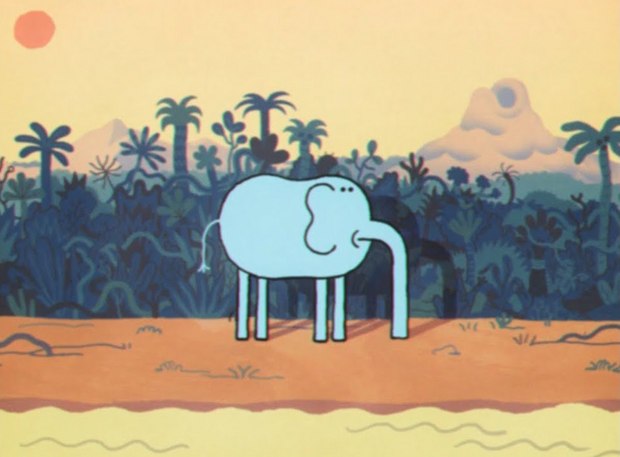 I’ve been in a Pink Floyd kick of late. I guess it’s a reflection of the temperament today. Something about their music, and particularly Roger Water’s poetic lyrics, nicely mirror today’s fractured, distracted world.

But, of course, we’re here to talk about the man whose life and music dominated much of their music both during his short tenure with the band and long after he left: Syd Barrett. Doesn't Waters seem a tad obsessed with Barrett? I get that they were childhood friends, but man, he does go on about ol’ Syd: Wish You Were Here, Dark Side of the Moon, The Wall. They all deal with Barrett’s decline in some form or other. It’s almost like post-Syd Floyd made it off the back of Barrett’s illness.

I guess we should talk about this short. It’s made by a guy named Yoanna Hervo. He apparently did it in his spare time. I gotta say, Mr. Hervo fooled me. I initially had this clip scheduled as a Keep in Motion column (where we focus on classic animation shorts 10 years or older) cause I really thought this was made in the 1970s to go with the release of the song. So kudos to the creator for tricking and treating me.

The story itself is slight (though the song itself is interesting in that it eschews traditional verse/chorus and instead just tells a short, linear narrative/fable). Something an elephant getting the premonition that a tiger is gonna kill him. The whole jungle freaks about the lion, not sure why. The tiger’s not interested in them, he just wants the elephant…and does indeed feast upon him. I’m guessing Syd wasn't on acid when he wrote this cause it’s a pretty weak story for an LSD trip.

Oh… and what’s with the black bird though? Whom the lyrics refer to as ‘one inferior”. Why the choice to make the bird all black? That seems a bit umm…well…uncomfortable.

If you're not in that, check out Hervo's bizarro vhs tinged Simpsons opening:

Dude! - ‘Rise of the Teenage Mutant Ninja Turtles: The Movie’ Arrives
‘Super Giant Robot Brothers’: A Milestone in Virtual Animation Production
‘Luck’ Aims to Bring Hope to Kids In and Out of Foster Care
Pre, Tech, and Post: The Many ‘Vizings’ of ‘Chip ‘n Dale: Rescue Rangers’
Hammering Out the VFX in ‘Thor: Love and Thunder’
‘DC League of Super-Pets’: A Family Film Produced by a Family
‘Light & Magic’: ILM’s Story of Family, Fun, and Pioneering Visual Effects
Eric Goldberg and Mark Henn Talk the Magic of Hand-Drawn Animation
END_OF_DOCUMENT_TOKEN_TO_BE_REPLACED